The law ministry aims to hire lawyers to help implement its plan to set up 1,023 Fast Track Courts across the country for speedy trial and disposal of rape and POCSO cases. However, the ground reality and lack of infrastructure suggest it could be an uphill challenge. By Nupur Dogra

The Union law ministry has decided to hire lawyers with up to eight years of pra­ctice to work as consultants to address the staff crunch it is facing in implementing its ongoing scheme of setting up Fast Track Court (FTCs). The law ministry through this scheme aims to set up 1,023 FTCs across the country for speedy trial and disposal of rape and Protection of Children from Sexual Offences (POCSO) cases. These officers will be appointed on a contractual basis to scale up project planning and bring policy changes that encourage more accountability and efficient disposal of these cases. They will coordinate regularly with the registrar generals of high courts to ensure that the 100 days’ timeline of completing the trial of such cases is followed.

On the face of it, the move to appoint consultants in the ministry is a welcome step on the part of the government to address the staff crunch, but there is also the ground reality concerning FTCs in the country. For a scheme as important as this one, closer scrutiny is req­uired. The scheme targets to dispose of 1,66,882 cases of rape and those under the POCSO Act that are pending in various courts through these 1,023 FTCs. Out of 1,023 FTCs, 389 will exclusively handle POCSO cases as directed by the Supreme Court. The re­maining 634 FTCs will deal with either rape cases or both rape and POCSO cases depending on the pendency and requirement.

While any scheme that ensures speedy trials in cases of heinous crimes against women and children is welcome, the reality is sobering. Recently, the National Crime Records Bureau’s (NCRB) annual “Crime in India” report pointed out that FTCs in several states take longer than regular courts to complete the trials. According to the report, out of the total number of trials completed in FTCs in 2018, only 22 percent were completed within a year which is the lowest percentage among all kinds of courts, the report said. Also, around 42 percent of these cases took more than three years to complete and around 17 percent of them took more than five years to complete (see graph). 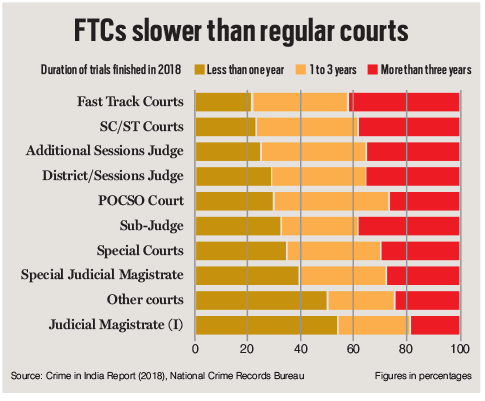 FTCs are set up for one year initially and are not permanent courts. Consequently, this scheme does not intend to create any permanent infrastructure. The courts will be made functional in suitable premises taken on lease or as decided by the states/UTs and respective high courts. The lack of focus on infrastructure related to these courts has raised serious concern over their future. Further, Delhi’s National Law University survey on FTCs revealed that these courts lacked the required infrastructure for conducting speedy trials. Many of them lacked appropriate technological resources to facilitate audio and video recordings of the victims. Staff crunch in courts as well as forensic lab and lack of physical and IT infrastructure plague these courts even in the age of Artificial Intelligence.

Speaking to India Legal on the importance of appropriate infrastructure for the smooth functioning of these FTCs, senior advocate Vikas Pahwa said: “I appreciate the move of the central government in constituting FTCs for trying POCSO and rape cases. These FTCs should be eCourts. The evidence should be digitally recorded.” He added: “In foreign courts, 15-20 witnesses are examined in a day, whereas courts in India would take six to nine months for the same.” Emphasising the need for absorbing technology in judicial proceedings, he suggested: “All service of the summons should be effected via digital technology. The identity of the prosecutrix and the witnesses should be kept secret and they should be kept away from the visible distance of the accused.”

According to the scheme, each FTC will have one judicial officer and seven staff members. An additional charge of the FTCs will not be given to any existing judicial officer or court staff. States/UTs may engage judicial officers and court staff on contractual basis where sufficient manpower is not available. Services of retired judicial officers with relevant experience may also be engaged to dispose of cases and the responsibility of setting up of FTCs lies with the state and UT governments. However, the plan of the scheme might look promising on the surface, but as one digs deeper, serious problems and challenges appear which have either been glossed over or remain unaddressed.

Advocate Nimisha Menon, who is a Legal Fellow at Councel to Secure Justice and is currently handling about 70 POCSO-related cases, told India Legal: “Addressing the issue of lack of number of judges and courts is more important than appointing lawyer consultants. There are already special POCSO courts that are going on in the country that are not FTCs. POCSO courts have judges who are specifically appointed for dealing with such cases. With increasing sensitivity and awareness around these cases, the judges try to resolve them as soon as possible. Despite this, cases go pending beyond four to five years due to lack of judges and inappropriate infrastructure. The judges are extremely over-burdened as their rosters are full. Hearing around 250 POCSO cases in a span of two or two-and-a-half months can be problematic for the judges and can take a serious toll on them as well. The focus should be on appointing more judges and sensitising and training them in self-care while dealing with such cases.”

Menon further added: “At the moment, POCSO courts function under additional sessions judges and every POCSO court has a public prosecutor assigned and a Delhi Commission for Women lawyer appointed to it. NGOs also play an active role in helping POCSO cases. Constituting fast track courts separately and appointment of consultant lawyers may lead to duplication of services. According to the Supreme Court’s directive, FTCs are constituted if the pending cases are more than 100 in a court. Currently, I am working with seven to eight POCSO courts and most of them have over 200 to 250 pending cases.”
Speaking on the need to provide appropriate infrastructure, she pointed out that currently, Delhi has only one forensic lab. This lack of forensic infrastructure further delays the cases as the evidence takes longer time to emerge.

In January, the Supreme Court directed all states to appoint exclusive public prosecutors in all the courts set up exclusively for POCSO cases. A bench of Justices Deepak Gupta and Aniruddha Bose remarked: “They need to know how to bring out the truth from children who are victims of sexual abuse and have to undergo the trauma again while recounting the traumatic experience… Not only is there a need to have exclusive public prosecutors but there is also a need to develop a training programme where these special public prosecutors should be trained to deal with issues that will arise in their courts. These issues may not be confined to legal issues which otherwise public prosecutors may be trained to deal with. The issues may be psychological, health and other related issues.”

This observation by the apex court highlights that there are many dimensions to be taken care of while addressing sensitive cases like that of POCSO and crime against women. Another important aspect of the scheme is that the state/UT governments will take requirements from the high courts and draw up an action plan of implementation.

Each FTC will exclusively handle pending cases of rape and POCSO. No other cases of crime against women and children will be transferred to these courts and these courts will function fulltime. These provisions too, like the whole scheme, seem well-intentioned and promising but the lack of judges in the subordinate judiciary is already alarming. The recruitment system of judges in states lacks uniformity, leading to piling up of vacancies. The high courts are already over-burdened and now with the planning and implementing being left to states, the FTCs might as well lack uniformity across the country thus further amplifying inequitable distribution of justice across the country. With the increasing cases of crime against women and children in India, it has become extremely important that we strengthen our current judicial system for swift disposal of such cases.

According to the latest NCRB data, there were 1.33 lakh rape cases and 90,205 POCSO cases pending trial at the end of 2016. If the government is serious about fast-tracking such cases, it will not only have to bring in proper infrastructure with new courts and more judges, but will also have to ensure that this scheme does not lead to further delays due to duplication of services.

The Allahabad High Court has directed the Principal, Jawahar Navodaya Vidyalaya, Barua Sagar, Jhansi to take a decision within two weeks on granting admission to the successful candidate in Class 6.
Read more
Columns

Robinhood allows you to trade US stocks without commissions, and there are no fees for withdrawals or inactivity. In addition, it provides a user-friendly mobile trading platform and web interface. So, we believe that this crypto broker definitely deserves your attention.....
Read more
India Legal
Did you find apk for android? You can find new Free Android Games and apps.

The Allahabad High Court has directed the Principal, Jawahar Navodaya Vidyalaya, Barua Sagar, Jhansi to take a decision within two weeks on granting admission to the successful candidate in Class 6.
Read more