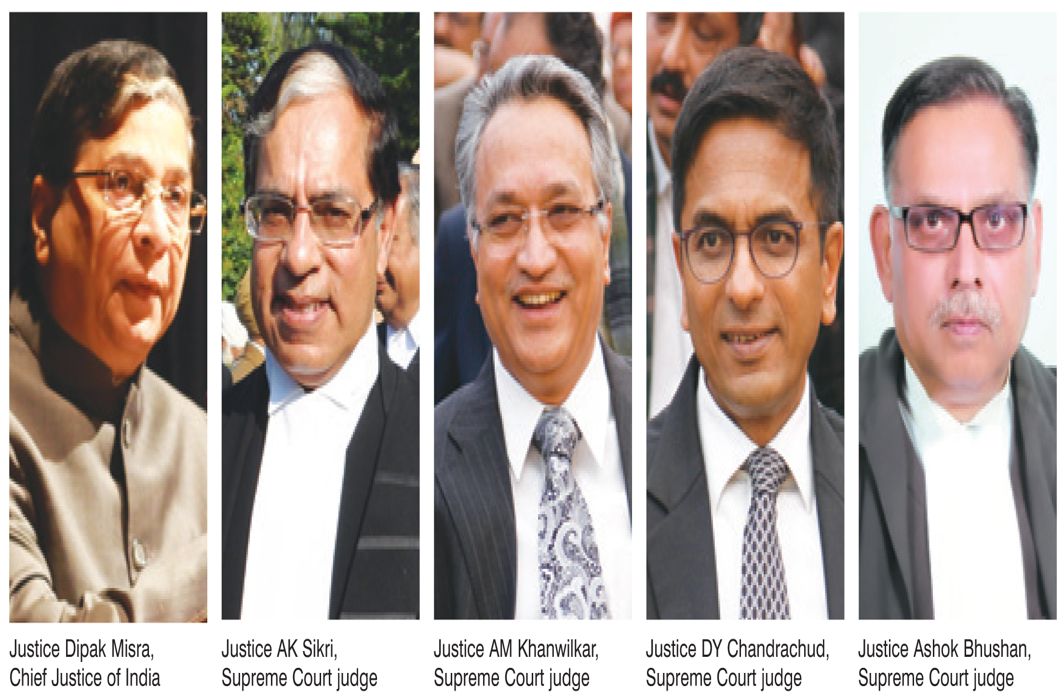 In the face of numerous instances of Aadhaar glitches, the government and the UIDAI have backtracked and said that other identification papers would do

Even as a Supreme Court constitution bench of Chief Justice Dipak Misra and Justices A K Sikri, AM Khanwilkar, DY Chandrachud and Ashok Bhushan hears crucial matters on Aadhaar—its linkages and privacy and security issues—common people continue to suffer. If they fail to either present their Aadhaar cards or authorities fail to authenticate them, people are deprived of basic rights and entitlements. Even the bench agreed that authentication was at the heart of issues related to Aadhaar.

The centre had so far remained un-moved at the inhuman treatment meted out to legitimate claimants of basic services if they don’t have an Aadhaar card. Even as some died of starvation, being denied rations for weeks because of a technical glitch in the Aadhaar system, the political class had glossed over these cases with comments that never touched on the actual issue. But when two women were forced to deliver their babies within the compounds of government hospitals as they were denied medical care because they didn’t have Aadhaar cards, better sense seems to have prevailed on the authorities.

First, the Unique Identification Authority of India (UIDAI) issued a statement that nobody can be denied access to basic services because of the lack of an Aadhaar card. Alternative identification papers, where available, should be deemed enough. That shows that the Authority’s high-brow attitude regarding their faulty system has taken a severe beating. And then, Union Law Minister Ravi Shankar Prasad pretty much parroted the same instruction.

If Aadhaar data was so readily accessible by service providers and if the system was so well-oiled, what was the need for the Supreme Court to hear so many appeals against this or why were top authorities making such defensive statements? It helps the political leadership of the country to ignore the hardships people have to undergo due to Aadhaar as bad publicity can backfire. It has already put the BJP in a bind.

There is also a legal angle to this issue which came up during submissions at the apex court. This is with regard to Article 21 (Right to Life) and earlier Supreme Court judgements. Article 21 secures two rights: Right to life and right to personal liberty.

In Bandhua Mukti Morcha vs Union of India, Justice PN Bhagwati had observed: “It is the fundamental right of everyone in this country… to live with human dignity free from exploitation. This right to live with human dignity enshrined in Article 21 derives its life breath from the Directive Principles of State Policy and particularly clauses (e) and (f) of Article 39 and Articles 41 and 42 and at the least, therefore, it must include protection of the health and strength of workers, men and women, and of the tender age of children against abuse, opportunities and facilities for children to develop in a healthy manner and in conditions of freedom and dignity, educational facilities, just and humane conditions of work and maternity relief.”

Bhagwati called these: “… the minimum requirements which must exist in order to enable a person to live with human dignity and no State, neither the Central Government nor any State Government, has the right to take any action which will deprive a person of the enjoyment of these basic essentials.” 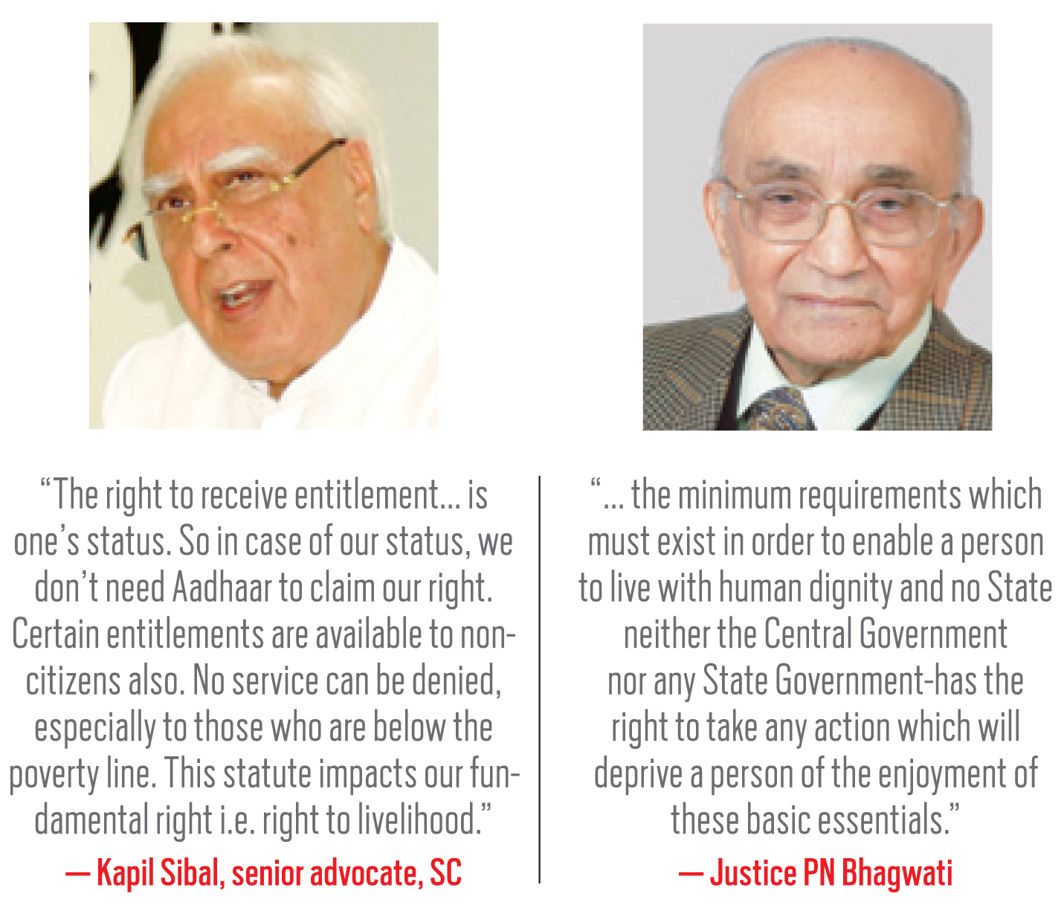 Hence, hospitals which have refused these admissions directly infringe upon the rights of those women. By that extension, would Aadhaar cards too be an infringement? That was pointed out in Court by senior counsel Kapil Sibal. He said: “The right to receive entitlement… is one’s status. So in case of our status, we don’t need Aadhaar to claim our right. Certain entitlements are available to non-citizens also. No service can be denied, especially to those who are below the poverty line. This statute impacts our fundamental right i.e. right to livelihood.”

The recent statement of the UIDAI and Prasad on alternate IDs makes the government look befuddled. After all, the administration had remained stiff about its draconian move to try and track every move of the public. But now it has been pushed on the back foot.

At a recent meeting of IT ministers and secretaries from different states, Prasad said that in the absence of the Aadhaar card or number, any alternate identity proof should be enough for the person to claim his due of essential ser-vices such as healthcare and food grains. Prasad admitted that biometrics do not match due to worn out finger-prints. He was finally speaking the same language as a section of the me-dia. He said that food grain shops cannot deny claimants their quota of ration and conceded that this has been one of the biggest failures of the Aadhaar system. The minister said that in such cases, the beneficiary’s name and other details must be noted in a register.

Adding to the already existing chaos over the porous database, Prasad added another one—of facial recognition system which is unreliable. He said that facial identification will kick-off from July 1. This is to “end the problems faced by labourers, farmers and senior citizens”. Will it?

According to Robinson Meyer of US daily The Atlantic, who has researched the credibility of different face recognition softwares, it all starts with the “most benign” one—those available in smart phones. This software, says Meyer, just says: “‘Hey, here’s a face,’ then (often) auto-focuses the lens on it. This is called face-detection. Then there is facial characterization, which discerns the demographics of a face: It sees not a generic human but a white male in his early thirties… Other types of facial recognition have more serious implications. Some software uses facial recognition for verification purposes, activating a laptop or phone only when the camera sees an approved visage. But the gravest of all is when facial recognition is used to identify an unknown person—when a database connects a stranger’s face to a name.” 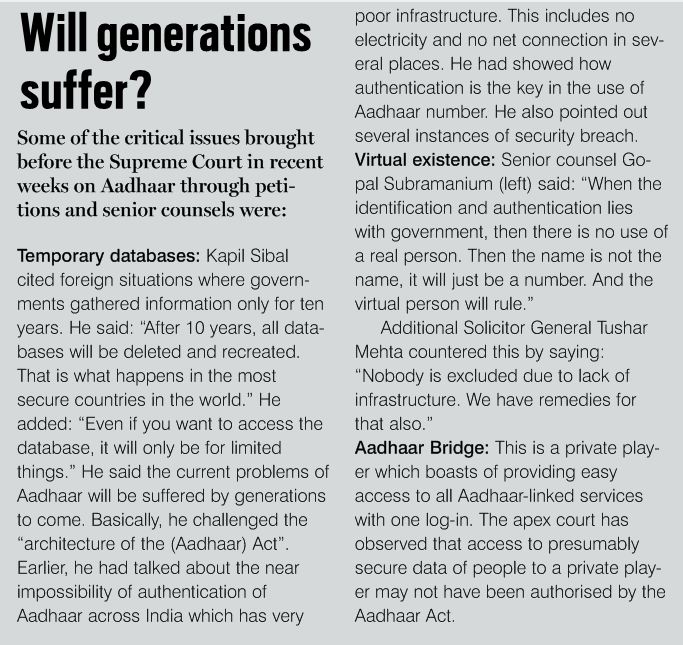 Meyer says: “It’s this kind (the last kind) of facial recognition that people worry about most… (and) even this most serious form of facial recognition has two different varieties. There’s an online, computer-augmented form: Can software identify you from a picture uploaded to Facebook? And there’s an offline, ‘in the wild’ form: Can software identify you by taking your picture while you’re just walking around?

“The Facebook AI team’s vaunted algorithm, for instance, specializes in photos online. It knows whether two images depict the same person 97.25 percent of the time. On average, humans score 97.5 percent on the same test.”

Regarding its offline uses, he is more specific. He says: “An Israeli company called Face Six says that 30 churches around the world use its facial-recognition software, Churchix, to track parishioners, but refused to specify to a Fusion reporter which ones they are—which renders its own assertions unverifiable. Another company, FaceFirst, boasts that it can identify known shoplifters as they enter a store.”

While the use of such software is expanding, how can they be admissible in court when even the old technology of lie detector tests isn’t? Facial recognition could add to the muddle that Aadhaar has created, and the more the government delves into technicalities it doesn’t understand, the more will be the glitches and the backlash. The political price will be high.