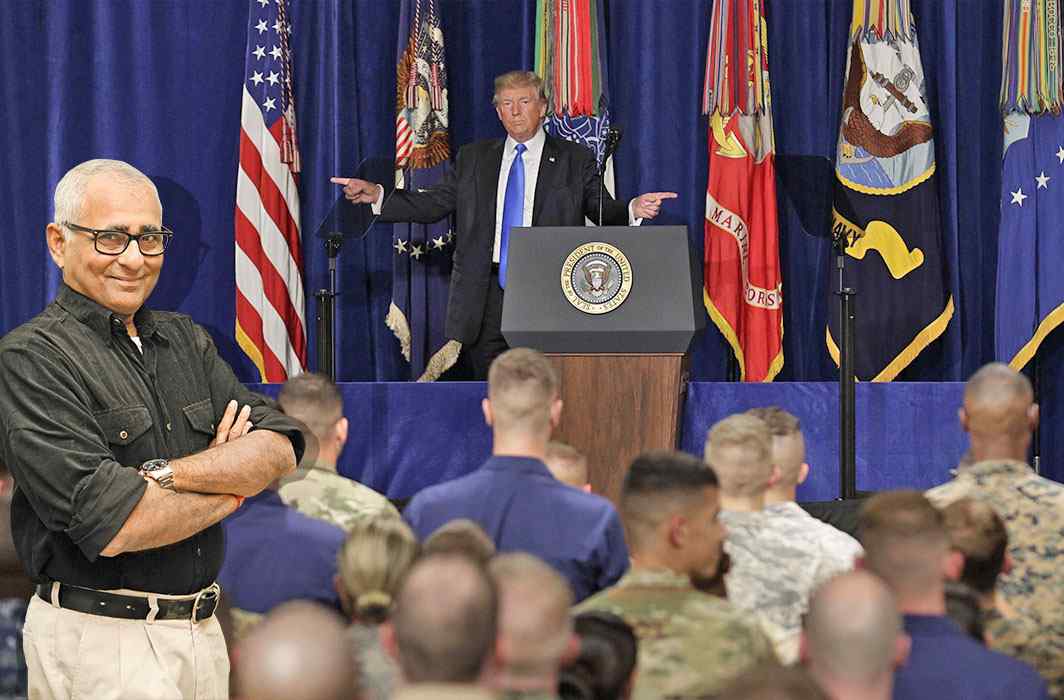 Washington DC: President Donald Trump’s much ballyhooed “new” Afghanistan policy is old wine in new bottles. It is more an effort to showcase Trump as being “presidential and decisive” to his domestic audience when his popularity ratings are at an all-time low, rather than any bold new stratagem to end the conflict in one of the most explosive regions in the world.

The theatrics which have caught the world’s attention, however, are Trump’s blunt assertions that his administration will come down heavily on Pakistan for sheltering terror and pro-Taliban networks such as the Haqqani organisation, while leaning more heavily on India to play a more dominant role in the region. Cold-shouldering Pakistan publicly—Trump accused it of “harboring agents of chaos”—while tilting more openly towards India is the policy shift which has proved to be the headline-grabber all across the world rather than the commitment of a few more American ground troops in Afghanistan.

What this implies in terms of military and diplomatic strategy or what will actually change on the ground is anybody’s guess. This is largely because historically, the goals of foreign interventionists in Afghanistan have remained amorphous outside of protecting their own interests in this strategically located and minerally rich mountain terrain. Shifting alliances and rapid regime changes make it a impossible to define permanent friends or enemies in Afghanistan. There are too many cooks churning up the broth—America, NATO, Iran, Pakistan, Russia, and increasingly, China.

So what does an American “victory” which Trump now desires after having campaigned for a troop pullout from Afghanistan, which he had described as an expensive foreign, no-gain adventure for the US, really mean? Well, he tried to define it in his speech: “Attacking our enemies, obliterating ISIS, crushing Al Qaeda, preventing the Taliban from taking over Afghanistan, and stopping mass terror attacks against America before they emerge.”

And how will he do this? Even though he did not spell it out, Pentagon and State Department sources have hinted that the first step, the military one, will be to increase American troop levels from the current 8,500 to about 12,000 and intensify drone attacks. The troops, however, will be confined to support and training activities and counter-terror intelligence rather than being engaged in direct battle with the Taliban and other rebel forces. This means there is now a commitment for American forces to remain in Afghanistan for at least a decade, thereby prolonging what is possibly the costliest 16-year military operation in American history.

Afghanistan government security forces loyal to President Ashraf Ghani number anywhere between 2,00,000 to 2,50,000 and are not yet considered to be fully trained or battle-worthy. The Taliban con-trols anywhere between 35 to 40 percent of the country, and are gaining ground, with a strangle-hold in Helmand, the opium capital of the region. Islamic state adherents are trying to gain a foothold in Khorasan.

President Barack Obama’s “surge” in Afghanistan saw the presence of over 1,00,000 troops in 2010 before the gradual withdrawal—an amount almost equal to the Russian buildup before Moscow’s ignominious retreat in 1989. That comparison in itself speaks volumes for the fate of foreign military involvement in Afghanistan. The historical chain shows—starting with the British reverses —that you can neither set up a Westminster nor a Kremlin nor a White House in Kabul. Yet, in the current stalemate, about 3,000 civilians and government troops are killed every year, while the Taliban and rebel fighters lose 10,000 men who are replaced just as rapidly.

On the diplomatic front, Trump’s “tilt” to India may be more a public snub or an irritant to Pakistan, but it is not overly worrying unless Trump can match words with action, which seems to be a difficult proposition for the American President. His government has been unable to fill 100 strategic posts. Washington does not have an ambassador in Kabul, and the President’s Special Agent position in Pakistan, charged mainly with looking after Af-Pak issues, remains vacant.

The exact nature of the role that Trump wants India to play in Pakistan remains unclear. Whispers in diplomatic quarters in Washington are that Trump requested Prime Minister Narendra Modi during their last meeting for even “a token form” of military assistance. Modi, sources say, was sympathetic but insisted that Washington should display firmer resolve in deterring Pakistan from aiding and abetting Taliban-networked terrorist groups like LeT and JeM in their hits on India and involvement in the Kashmir insurgency.

India already has over a billion dollars in investments in Afghanistan in civilian projects. Indian diplomats have told their American counterparts that New Delhi would be willing to double this figure on its own in return for a greater American involvement in India’s security concerns and tough action against Pakistan. So, the American administration has been trumpeting cutting off billions of dollars in economic and military aid to Pakistan as well as possible sanctions against Pakistani government operatives found sympathising with or aiding anti-India terror groups.

But Pakistani diplomats have been nothing short of brilliant in manipulating their Western allies, particularly America, when it comes to triangular diplomacy and the strategic isolation of India. The Pakistani position with the Americans behind closed doors is that they have no option but to use some of the Taliban-supported groups as a buffer against India forging alliances on Pakistan’s western front in order to deny it “strategic depth” in the east, where Indian military forces are arrayed against their country. They also argue that Indian “repression” in Kashmir is the real cause for Islamic insurgent violence against India, rather than any Pakistani instigation.

Sanctions and threats against Pakistan have never worked. I remember former Congressman Lester Wolff, chairman of the Asian and Pacific Affairs Committee, telling me that he had repeatedly informed the US administration—with photographic evidence in the early 1980s—that Pakistan was building centrifuges to develop nuclear weapons, but he was ignored

The Americans are not unaware of Pakistan’s double game. Yet it works. It’s called the “loyal ally” line. Whenever America gets tough with Pakistan, Islamabad’s diplomats and lobbyists fan out among the capital’s Congressional, administration, financial, media and military circuits, reminding them—with deep humility and sense of pain and hurt—that “you are letting down your most loyal ally who has always stood by your side”. They are doing that even now, pointing out that Pakistan’s civilians and school children have been wounded, maimed and killed by the Taliban.

Also, the relationship between the Pakistani military, the ISI, and American defence contractors who have done billions worth of business with Pakistan is a bond that very few Presidents or members of Congress have been able to break. So, America looks the other way even though it is aware that the military and financial aid it gives to Pakistan to fight insurgents and protect western interests in Afghanistan is diverted to building up its military strength against India. This has been a long-standing bone of contention between India and the US which Modi conveyed to Trump in plain language.

Sanctions and threats against Pakistan have never worked. I remember former Congressman Lester Wolff, chairman of the Asian and Pacific Affairs Committee, telling me that he had repeatedly informed the US administration—with photographic evidence in the early 1980s—that Pakistan was building centrifuges to develop nuclear weapons, but he was ignored. Later, Congressman Stephen Solarz succeeded in getting through Congress the Solarz Amendment which would sanction any non-NPT country suspected of developing fissionable materials. Later, this sanction was lifted specifically for Pakistan even as evidence mounted it was about to go nuclear.

An earlier offer of financial aid to Pakistan by President Jimmy Carter, the former peanut farmer from Georgia, to deter Pakistan from the nuclear path and yet retain its support against the Russian invasion of Afghanistan in 1979, was disparagingly dismissed by Gen. Zia-ul-Haq as “peanuts”.

On the diplomatic front, Trump’s “tilt” to India may be more a public snub or an irritant to Pakistan, but it is not overly worrying unless Trump can match words with action, which seems to be a difficult proposition for the American President. His government has been unable to fill 100 strategic posts.

The Wall Street Journal recently commented that Pakistan “has been exploring alternative alliances in recent years. The new pressure on Pakistan as well as a renewed US tilt towards India that Mr Trump stressed is likely to drive Islamabad deeper into a growing partnership with China, which has shown an increased willingness to provide support to Pakistan.  Washington has to be careful that any pressure campaign doesn’t jeopardise its ability to move military supplies through Pakistan to Afghanistan which is landlocked”. China has already invested some $55 billion in infrastructure projects in Pakistan.

Pakistan remains openly defiant and defensive. It denies harbouring terror groups and paints itself as the biggest victim of terror. Its foreign minister, KM Asif, has gone on record saying “we can survive without (US) money. We are not fighting this war with their money”.

But there is no doubt that Islamabad takes very seriously any Indian attempt to play the “Afghanistan card” against it. This is its vulnerable underbelly. And it may make a difference, no matter how small, if not to the larger conflict in Afghanistan, at least to the Indo-Pak equation if Trump puts his money where his mouth is and India walks that extra mile.