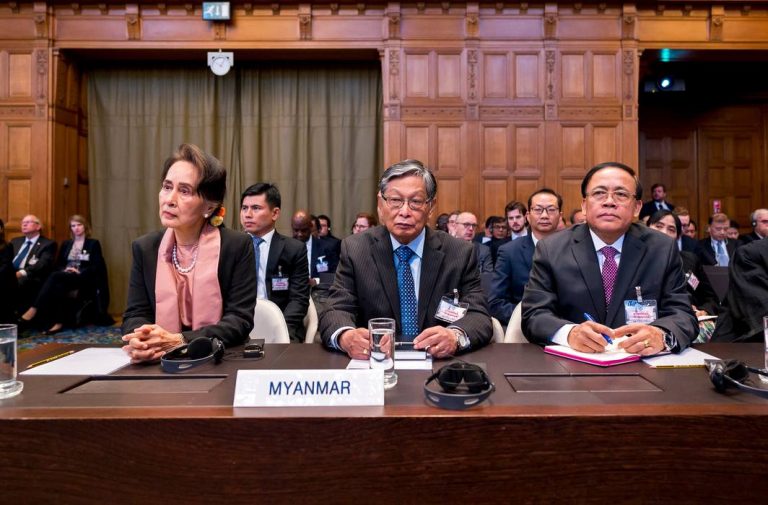 While the ICJ ruling pulled up Myanmar’s de facto head, Aung San Suu Kyi, over the genocide of Rohingyas, the fact is that she can’t antagonise the army or the conservative Buddhist population

Myanmar’s de facto head of state and State Counsellor Aung San Suu Kyi is facing yet another challenge. Already grappling with the complexities of constitutional
democracy designed by the Tatmadaw (army), she now has to confront a recent order of the International Court of Justice on the Rohingya genocide issue.

On January 20, the 17-member ICJ panel imposed “provisional measures” on Myanmar, ordering it “to take all measures within its power” to prevent the killing of Rohingya Muslims remaining in Rakhine state under the 1948 Genocide Convention. The Court also asked Myanmar to preserve evidence of Rohingya persecution. It also ordered it to submit a report to the ICJ within four months, with additional reports every six months “until a final decision on the case is rendered by the Court”.

The ICJ’s order is an interim one to meet Gambia’s request for provisional measures “to stop genocidal conduct immediately” against about 6,00,000 Rohingyas remaining in Myanmar.

Myanmar is one of the 150 countries which ratified the Convention on the Prevention and Punishment of the Crime of Genocide which came into force on January 12, 1951. As a signatory to the Convention, it is obligatory for Myanmar to take action, in letter and spirit, against genocide both in times of war and peace.

Gambia’s case before the ICJ pertains to the military excesses committed during military operations launched in the wake of Arakan Rohingya Salvation Army (ARSA) insurgents’ attacks on police posts in 2017. The army’s savage reprisals unleashed on the Rohingya population resulted in 7,00,000 of them fleeing the country to seek refuge in Bangladesh.

The ICJ rulings are final and there is no provision for appeal. Although the Court has no mechanism to enforce its orders, Myanmar is obliged to implement it under international law. Many human rights organisations and Rohingya expatriate bodies have hailed the ICJ ruling as a vindication of their allegations of genocide committed against the Rohingyas.

As the BBC put it, Suu Kyi’s appearance before the ICJ hearing in her capacity as foreign minister in December 2019 to defend the Myanmar army’s conduct in 2017 “obliterated any remnants of Aung San Suu Kyi’s international reputation”. In any case, her global image as a “human rights icon” for her unrelenting fight for restoring democracy, took a severe beating when the military carried out its no-holds-barred operations against the Rohingya insurgents.

Speaking at the ICJ, she said the Myanmar defence services “responded” to “an internal conflict started by coordinated and comprehensive armed attacks” in western Rakhine state in August 2017, leading to the exodus of Muslims.

On the eve of the ICJ ruling, Suu Kyi wrote in an op-ed piece in Financial Times: “An informed assessment of Myanmar’s ability to address the issue of violations in Rakhine can only be made if adequate time is given for domestic justice to run its course.” She called upon the international community to respect the country’s judicial system. The war crimes allegedly committed by troops in 2017 will be prosecuted through “our military justice system”. “We need to respect the integrity of these proceedings and refrain from the unreasonable demands that Myanmar’s criminal justice system complete investigations in a third of the time routinely granted to international processes,” she wrote.

The state counsellor said Myanmar was a victim of “unsubstantiated narratives” by the international community, apparently referring to reports by international human rights watchdogs like Amnesty International and Human Rights Watch. She accused them of condemning Myanmar “based on unproven statements without due process of criminal investigation”. The allegations against Myanmar “all rely on a fact-finding mission by the UN Human Rights Council. This is precariously dependent on statements by refugees in camps in Bangladesh”.

She wrote that a fair reading of the report of the Independent Commission of Enquiry (ICOE) on January 20 “would show that this is a real risk in the current international proceedings on events in Rakhine”.

The four-member ICOE was constituted in July 2018 with Ambassador Rosario Manalo, former foreign minister of Philippines, as chairman. It was tasked to investigate allegations of human rights violations and related issues following the terrorist attacks by the ARSA in Rakhine state.

The operative part of the ICOE report said that “war crimes, serious human rights violations and violations of domestic law took place during the security operations between August 25 and September 5, 2017.  Although serious crimes and violations were committed by multiple actors, there are reasonable grounds to believe that members of Myanmar’s security forces were involved”. It further added, “the killing of innocent villagers and destruction of their homes were committed by some members of Myanmar’s security forces through disproportionate use of force during internal armed conflict”.

However, the ICOE held there was “insufficient evidence to argue, much less conclude that the crimes committed were undertaken with the intent to destroy, in whole or in part, a national, ethnical, racial religious group, or with any other requisite mental state for the international crime of genocide”.

Even if Suu Kyi wants to bring to book troops involved in serious crimes against the Rohingyas, there are constitutional limitations. The 2008 constitution legitimised the military’s Presence in the legislature and governance. One-fourth of the seats in Parliament are reserved for the army as also three key ministries—home, defence and border affairs. The army agreed to the creation of an extra-constitutional position of state counsellor (de facto head of state) to accommodate Suu Kyi at the top of the state structure as she was not eligible to be elected president because of her marriage to a foreigner.

So her government seems to have adopted tokenism as the best option. For instance, seven soldiers jailed for 10 years for killing 10 Muslim men and boys in the village of Inn Din were released last November after serving only a year of imprisonment. This was in sharp contrast to two Myanmar journalists who exposed the killings—they spent a longer time in jail.

While western opinion-makers castigated her for defending the “genocidal” actions of the army, it endeared her at home to the armed forces and the conservative Therawada Buddhist population, which has shown strong anti-Muslim and xenophobic sentiments.

During the 2010-15 rule of the pro-army Union Solidarity and Development Party, the Thein Sein government restored media freedom and released most of the political prisoners and constituted the State Human Rights Commission. However, it also saw some of the worst anti-Muslim riots by Buddhist extremist elements, particularly against the Rohingyas in Rakhine state, under the benign watch of law-enforcing agencies controlled by the army. There were as many as five anti-Muslim riots in which 282 people, mostly Rohingya men, women and children, were killed.

The Thein Sein government disenfranchised Muslims prior to the 2015 general election. Although the NLD led by Suu Kyi had enjoyed the support of Muslims, it maintained a studied silence on the issue and did not field any Muslim candidate when it won a thumping majority in the parliamentary poll in 2015.  This showed that Suu Kyi, despite her nationwide popularity, is extremely cautious in handling the Rohingya issue for fear of backlash from the Buddhist population. With a general election due at the end of the year, Suu Kyi is unlikely to embark on any radical action on the Rohingya issue lest it affects the NLD’s poll prospects. In the long term, the Rohingyas’ plight cannot be ameliorated unless their status as citizens of Myanmar is recognised. This would require amending the Burma Citizenship, Law, 1982, to include them among the officially recognised indigenous ethnic groups. As the present list recognises only eight other ethnic groups, a million-plus Rohingyas have been rendered stateless. Unless they are recognised as citizens, it will be difficult to absorb them in the national mainstream.

Both the EU and the US, who generally spearhead human rights campaigns in international forums, have reacted cautiously to the ICJ ruling, perhaps because they understand the constraints under which Suu Kyi is functioning.

The Office of the UN Special Adviser on the Prevention of Genocide (OSAPG) uses an eight-category analysis framework to determine whether there may be a risk of genocide in a given situation. If Myanmar’s justice system strictly goes by OSAPG norms, probably many members of the Tatmadaw will be found guilty of committing genocide against the Rohingyas.

But unless the whole nation wills itself to do justice, it will be a Himalay-an task for Aung San Suu Kyi, despite her national popularity and acceptance by the Tatmadaw, to bring the guilty to book in the near future. So the Roh-ingyas run the risk of joining the long list of victims of unpunished genocides across the world.

However, internationalisation of the Rohingya issue will, hopefully, hasten constitutional reform in Myanmar to free democracy from Tatmadaw fetters. It could also amend citizenship and electoral laws so that stateless persons and minorities enjoy equal rights as citizens of Myanmar.