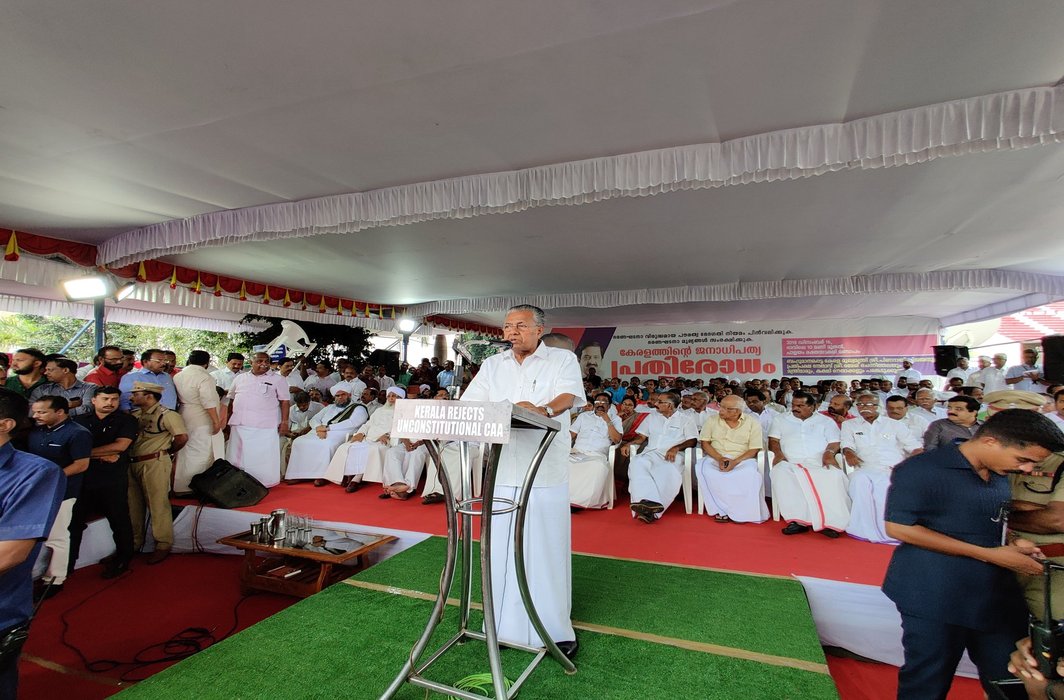 By being the first state to move the Court to declare CAA unconstitutional, Kerala has shown the way for other non-BJP states to follow

At a time when large parts of the country are witnessing protests and violence over the Citizenship (Amendment) Act (CAA), in a rare gesture, a church in Ernakulam district of Kerala threw its gates open in late December to Muslim protesters. The protesters had come marching from several kilometres away to voice their discontent over CAA. Not only did the church authorities make all arrangements for them to offer namaz within the precincts of the building, but the vicar himself poured water for the mandatory ablutions before prayers.

Kerala, which has always set an example of civilised coexistence among people of different faiths, is once again assuming a crucial role, this time in the political sphere. Congress-ruled Punjab too has joined it in taking on the centre with regard to CAA.

On the last day of 2019, Kerala’s normally warring political class from both the ruling Left Democratic Front (LDF) and the opposition United Democratic Front (UDF) buried the hatchet and joined hands to pass a resolution in the assembly denouncing CAA even as they affirmed that it would not be allowed in the state. Later, Chief Minister Pinarayi Vijayan wrote to 11 non-BJP chief ministers asking them to take similar steps against the controversial law and pitching for unity to protect democracy and secularism. “People from various cross-sections of society, irrespective of any differences they might have, need to stand united in preserving the basic tenets of our polity which form the cornerstone of Indian democracy,” Vijayan said in the letter.

The resolution reflected the widespread discomfort and disquiet that the legislation has caused. Rather than treating it as a controversy over the question of whether a state assembly is competent to question the law on a matter within the Union government’s domain, the centre should have reflected on the issue. Instead, it unleashed, among others, the state’s governor, Arif Mohammed Khan, and Union Law Minister Ravi Shankar Prasad to denounce the resolution on the grounds that states had to implement central laws. Khan went to the extent of saying that the state government’s move was a “breach of protocol”. “…common courtesy demanded that prior permission (should have been) taken from me… at least I should have been kept in the loop,” he reportedly said.

With Kerala showing the way to other non-BJP chief ministers by becoming the first state to challenge CAA, it has brought the focus on Article 131 under which the challenge was initiated. Article 131 strictly involves the government and one or more states. It places checks-and-balances on the centre’s power to push laws into motion which call for an interpretation of the Constitution.

“(a) between the Government of India and one or more States; or

“(b) between the Government of India and any State or States on one side and one or more other States on the other; or

“(c) between two or more States, if and in so far as the dispute involves any question (whether of law or fact) on which the existence or extent of a legal right depends: Provided that the said jurisdiction shall not extend to a dispute arising out of any treaty, agreement, covenant, engagements, and or other similar instrument which, having been entered into or executed before the commencement of this Constitution, continues in operation after such commencement, or which provides that the said jurisdiction shall not extend to such a dispute.”

In a federal polity, where the centre and states work on independent and concurrent subjects, there may be moments when both clash–especially when the party at the centre is not ruling in a state. However, if the court delineates the inter-governmental dispute as one with a political character, it will direct the parties to sort it as a writ petition in the concerned High Court and come for appeal later, if required. When Arvind Kejriwal’s government in Delhi tried to use Article 131 during its tussle with the lieutenant-governor, the Supreme Court sent it back saying it was a political issue.

Kerala has sorted the “political” from the “legal” by passing a joint resolution by the LFD and UDF members, thus establishing that the representatives of the people unanimously demand the scrapping of CAA. There is a fair chance that the Supreme Court upholds the maintainability of the suit.

The scope of Article 131 is to determine a question of law.

Justice PN Bhagwati had observed this in a 1977 judgment where Karnataka had challenged the appointment of a commission to probe corruption allegations against its chief minister and some ministers. The majority view in the 4:3 judgment held that a state would be concerned where any action affected its government.

The Kerala suit may be referred to a larger bench if the judges opine differently from earlier cases involving Article 131 where up to seven judges decided on centre-state relations.

The principal objection of both Khan and Prasad was that citizenship was a matter concerning the Union and was thus not open to state assemblies to give their opinion on it. Yet, experts say that to the extent that a state government believes that a parliamentary law is not constitutional, it is entirely in order for the state legislature to call for its repeal.

That is what the state did on January 14 when it became the first state to move the Supreme Court to declare CAA unconstitutional. The government made the prayer under Article 131 of the Constitution. Under the Constitution, states are not allowed to take any action which undermines or “impedes” the powers of the centre. The centre tells the states which laws to implement and how they are to be implemented. However, under Article 131, the Supreme Court is given the power to step in between any dispute between states and the centre.

Meanwhile, Punjab too has sought repeal of CAA. It will also seek an amendment to the form of the National Population Register (NPR) to allay fears regarding it and the National Register of Citizens (NRC). The draft resolution prepared by it states that the CAA has caused “countrywide anguish” and “social unrest with widespread protests”.

“Alongside the religion-based discrimination in granting citizenship, it is apprehended that the CAA is also likely to endanger the linguistic and cultural identity of some sections of our people. CAA also envisages cancellation of registration of overseas citizens of India card holders if they violate any law,” the draft said.

In Kerala’s suit, it had sought the apex court pass a judgment declaring CAA violative of Articles 14 (right to equality), 21 (right to life and personal liberty) and 25 (freedom of religion) as well as violative of the basic structure of and principles of secularism. In addition to CAA, the state also challenged the Passport Amendment Rules, 2015 as well as the Foreigners (Amendment) Order, 2015 and sought the Court declare the two ultra vires the Constitution and void.

The centre had in September 2015 made changes to the Passport Act and the Foreigners Act allowing the stay of minorities—Hindus, Sikhs, Buddhists, Jains, Parsis and Christians—belonging to Bangladesh and Pakistan on condition that they prove that they were fleeing religious persecution and had entered India before December 31, 2014.

A year later, the centre made amendments to the two Acts to include Afghanistan in the list of countries from where non-Muslim refugees seeking shelter would be allowed to stay on in India without threat of deportation.

Stating that CAA, the Passport Amendment Rules, 2015 and the Foreigners (Amendment) Order, 2015 contravene the principles of secularism by looking at the religious identity of a person, the Kerala government mentions in its suit: “The same make religion and the country of origin of the person criteria for grant of citizenship and result in classifications based on religion and based on country, both classifications being apparently and manifestly discriminatory, arbitrary, unreasonable and have no rational nexus with the object sought to be achieved. It is trite and settled law that a legislation discriminating on the basis of an intrinsic and core trait of an individual cannot form a reasonable classification based on an intelligible differentia.”

The suit also argues that there is no rationale in selecting the three countries, and is, in fact, discriminatory towards migrants from countries like Sri Lanka, Myanmar and Bhutan. “The Impugned Amendment Act and Rules and Orders are bereft of any standard principle or norm in discriminating migrants from other countries such as Sri Lanka, Myanmar and Bhutan, which are sharing international borders with India and to which and from which there has been trans-border migration. There is no rationale in not extending the rights conferred to a class of minorities from Pakistan, Afghanistan and Bangladesh to religious minorities belonging to the said countries of Sri Lanka, Myanmar, Nepal and Bhutan. The arbitrary classification of the aforesaid three countries of Pakistan, Afghanistan and Bangladesh without any rationale or standard principles constitutes manifest arbitrariness and violates Article 14 of the Constitution.”

The state government’s suit states that CAA, Passport Amendment Rules, 2015 and the Foreigners (Amendment) Order, 2015 are discriminatory on the grounds that they cover only religious persecution, and argues that persecutions are for varied reasons like ethnicity, linguistics, etc. The Kerala government has asked the Court to pass a judgment and decree declaring CAA violative of Articles 14, 21 and 25 of the Constitution and violative of the basic principle of secularism enshrined in it and declare it as something that was done beyond the scope of authority and hence void.

Seven non-BJP ruled state governments have already said they will not implement CAA. Kerala’s example of going to the apex court may well set the stage for a wider confrontation between the centre and the states.