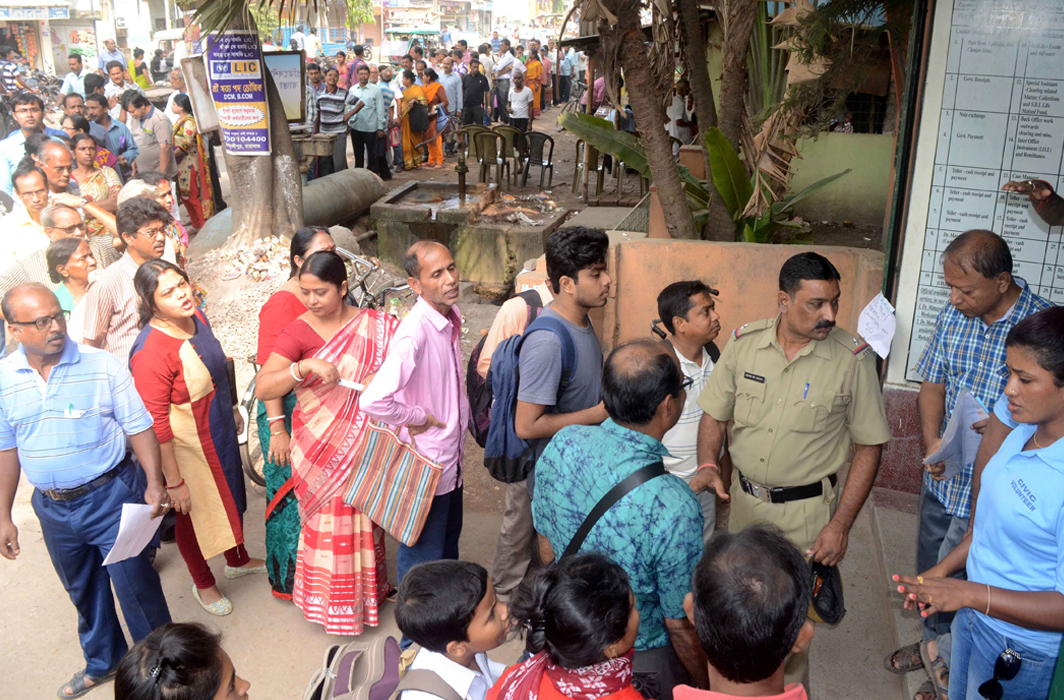 Note crunch in the wake of demonetization has hit the economy in the border districts of West Bengal. How will the resulting public fury be contained?

The traditional salesman’s pitch goes like this: The world runs on that one salesman selling something somewhere. When that stops, the world stops. In the north-eastern districts of West Bengal, namely South Dinajpur, Nadia, Malda, 24 Parganas (North) and others, something like this has happened following Prime Minister Narendra Modi’s announcement of banning Rs 500 and Rs 1,000 currency notes on November 8. The entire economy of the area virtually vanished into thin air. Nobody was selling, no one was buying.

Sure the entire nation is reeling under a terrible cash crunch—as it should when 86 percent of the currency in circulation is sucked out through a hastily formulated and poorly implemented policy change—but these districts near the Bangladesh border now exist in a virtual vacuum.

The economy of these districts of farmers rests on a few “verticals”. Farming is possibly the only legal one—mangoes from Malda were once the much awaited summer delicacy of all of Bengal, a leading export item that has seen a massive dip in the recent past.

Malda and its adjoining districts produced five lakh tons of the fruit per year, almost five percent of the national output. But an advisory from India’s Agricultural & Processed Food Products Export Development Authority (APEDA) earlier this year said that the Ministry of Climate Change & Environment of the UAE was alarmed at the high level of pesticide found in fruits and vegetables imported from India. This effectively shut out the mango export market to the UAE, where almost 70 percent of Indian mangoes used to be shipped. This was the second blow after eastern European countries banned such exports for similar reasons last year, before revoking the ban later. By then, Indian mango exports had dipped from 63,500 tons in 2011-12 to 43,000 tons in 2014-15.

The other “verticals” exist in the shadows. They are: human trafficking into India; cattle smuggling out of India; the growing, processing and sale of heroin, and the huge “cash” inflow to fund terrorist sleeper cells. The National Investigation Agency (NIA) has found this area to have the maximum number of such sleeper cells in the country.

How have such criminal activities survived and even thrived in these areas? The reason has been a lack of political will, something that has denied the requirement to form the required logistics of checks and balances for long.

It started as simple vote bank politics. These have been the areas where infiltration from Bangladesh has been rampant, the border being extremely porous. Unofficial estimates put this at over 650 people per day.

The interesting part is that many of those who walked in from across the border would be immediately welcomed by political parties—the Left Front during its rule and the Trinamool Congress (TMC) thereafter—who not only provided them official identity papers, such as Aadhaar Cards, voter IDs, etc., but also turned a blind eye when some even got to “buy” land, according to a senior police officer. Of course, these land deals are fake, too, because there isn’t any land left in those areas to sell promptly to one who was a “foreigner” maybe a week before.

The economy of the border districts has been reduced to a vacuum with Rs 500 and Rs 1,000 legal tenders being banned. Fake currency that had entered even villagers’ homes is now useless.

Therein lies the catch. Much of the estimated Rs 400 crore Fake Indian Currency Notes (FICN) in circulation in India sloshes around in this region, simply because this is the main transit point for almost all FICN that enters the country (printed illegally in Pakistan and those printed illegally in Bangladesh). Much of all such illegal transactions happen in FICN, mostly unknown to the dealers in these currency notes.

This is true for the reverse traffic that happens across the border, too: that of illegal cattle smuggling. In the dark of the night, hundreds of cattle are driven across the border, with the BSF unable to open fire because of “friendly neighbor” restrictions. This has come down with the center’s stringent cow protection policy, hitting the Bangladesh beef industry hard.

It had been estimated that about two million heads of cattle used to be smuggled out each year, amounting to a staggering $600 million-a-year underground “trade”.

This “black” economy had a large FICN component, too. Much of this money would slip through the system’s loopholes to the terrorist sleeper cells. The rest went to unsuspecting farmers, villagers, tribesmen and others. With banks few and far between, such activity flourished unhindered and uncontrolled.

Black wealth was generated, siphoned off by the criminally-minded within political parties and not till they reached the banks (which was rare) did they face any real hurdle. People went about their “work”, growing poppy on paddy fields, acting as “mules” to freshly-minted FICN that had just arrived from across the border, earning a decent “commission”, and sometimes, delving in a bit of agriculture and also politics.

Here are some of the possible scenarios:

Future scenario: This time, the mafioso crops will not sell. There is no money. And there is little that the law enforcement machinery can do to contain public (read mafioso) fury if it erupts.

Future scenario: This social “security bank” and political funding bank has disappeared. Quite like in the cities, where the “syndicates” siphoned money out of real estate ventures and where the ruling TMC doled cash for locality pujas, a lot of this money was redistributed to realize the political ambitions of the rulers. A huge law and order chaos looms on the horizon. Also, there being a ban on legal cattle exports, a huge inventory will build up in the region, needing tending to and controlling.

Future scenario: Now, when the farmer goes to revive his Jan Dhan Yojana  account and deposit those currency notes, he will be in for a shock when the banks declare them as FICN. There is absolutely no social safety net to help the farmers survive this tragedy.

The region is waiting to explode, and no fire tenders are in sight. Mamata Banerjee has a lot to worry about as she sets her sights on New Delhi.