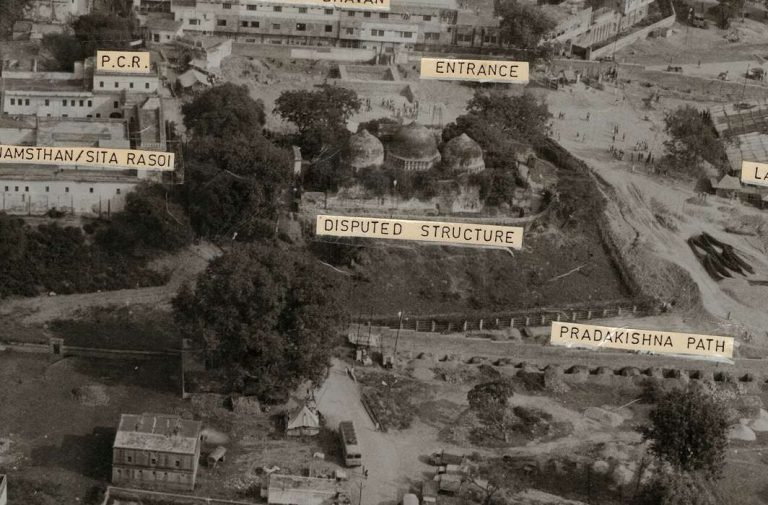 In Babri Masjid–Ram Mandir Dilemma: An Acid Test for India’s Constitution, Madhav Godbole, former Union Home Secretary and Secretary, Justice, provides rare insights through his comprehensive and detached analysis. The author, who was closely associated with the events when the Babri Masjid was demolished, throws light on how all major constitutional bodies failed in discharging their responsibilities. He further asserts that India cannot be at peace till an amicable solution is found to the Ramjanmabhoomi–Babri Masjid dispute. He suggests a solution based on equal respect for the sentiments of the two communities. Excerpts from the book:

I have a serious problem with the inter-mixing of religion with politics, whether it is the majority religion or the minority religions. The Chief Minister of Uttar Pradesh Yogi Adityanath has proudly declared: “Current politics and religion are intertwined…” (India Today, January 28, 2019, p. 56). In particular, I am unable to understand why Hindus, who are in an overwhelming majority in the country, feel the need to form separate organisations and political parties to protect their religion. Is the Hindu religion under threat in India? Who is threatening it? And, for that matter, is the Muslim or Sikh religion under any threat? This question needs to be asked and answered in respect of each religion in the country.

Though not happily worded, the Liberhan Commission has rightly recommended:

“A government which is formed on the premise of religion (sic) or which has religious issues on its political agenda must also be barred. A government which is formed by professing its support to a particular religion or which has a religious issue or purpose as its stated agenda must therefore fall foul of the explicit and implicit prescriptions of the Constitution.

To achieve the ideal of a secular state, the incorporation of religious agenda within political manifestos or electoral promises be made an electoral offence and should incur summary disqualification for the individual, or for the political party if such blatant resort to religious and casteist sentiment is part of the party’s substantive poll plank.”

The minority judgment of the Supreme Court in the Faruqui case referred to above has observed: “Secularism is given pride of place in the Constitution. The object is to preserve and protect all religions, to place all religious communities on a par.”

It is significant to note that even while the Constitution was being drafted, the Constituent Assembly (Legislative) had passed a resolution moved by Madabhushi Ananthasayanam Ayyangar on April 3, 1948, to separate religion from politics. It was passed almost unanimously, with only one Muslim member opposing it. Since there was so much support for it, it is not clear why a suitable provision for it was not made in the Constitution at that stage itself. I wonder if this was because there was hidden opposition to it. Nehru had strongly supported the resolution but took no action on it during his 17-year term as Prime Minister.

The question of communal riots was discussed at great length in the Jabalpur session of the AICC on October 29, 1967, when there was a strong demand by several members to ban communal parties. An amendment was also moved for imposing a ban on communal parties. But the AICC dithered by saying it would be difficult to decide whether a party was communal or not. Indira Gandhi, who was the Prime Minister at the time, went along with this view propounded by SK Patil.

Any such amendment of the Constitution would have called for a two-thirds majority in both Houses of Parliament. Such an amendment would also have to be approved by at least fifty percent of the State legislative assemblies. As stated in Chapter 4, it was only during the time of Jawaharlal Nehru, Indira Gandhi and Rajiv Gandhi that the ruling Congress Party enjoyed such massive majority in Parliament and in the states. But none of the three stalwarts of the Nehru-Gandhi family took any steps in the matter. No government since then has enjoyed such a majority to undertake this major task.

After the demolition of the Babri Masjid, the Narasimha Rao-led government wanted to re-establish its secular credentials. In my discussion with Prime Minister Rao in January 1993, I had drawn his attention to the fact that:

There were sharp differences not only between political parties but also among thinkers, intellectuals and jurists on the subject. It would, therefore, be better if the pros and cons were discussed in a forum such as the NIC so as to start a national debate on the subject. I said the government’s seriousness of purpose and its commitment to the cause of secularism could be underlined in a paper to be put up to the NIC. After the meeting of the NIC, a committee of jurists and political thinkers could be set up to draft specific legislative proposals. At each stage, these could be discussed in an open manner so as to arrive at the highest possible common denominator. I had urged, therefore, that the proposals for amendment of the Constitution should not be pressed till a national consensus was arrived on the subject. The Prime Minister had agreed with this assessment and had asked how soon a preliminary paper could be prepared for submission to the NIC. I had told him that it could be got ready within two months. He then asked me to go ahead with the work.

It came as a surprise to me when I read in the newspapers while on casual leave in Pune in early March 1993 that the Prime Minister had announced the government’s decision to introduce the Bills for separation of religion from politics…Obviously, the pressures to move ahead immediately were too strong, making the government unmindful of the fact that such haste would prove counterproductive to the very cause of secularism. (Godbole 1996: pp. 416-17)

Narasimha Rao’s effort to score a point over other political parties by introducing the Bills for amendment of the Constitution and the Representation of the People Act, without any prior consultations, backfired completely, as was to be expected. No effort was made to build a consensus among the political parties, either before or after the introduction of the Bills. The way the Bills were piloted by the government in Parliament was simply shocking, to put it mildly. It led me to conclude: “One wonders whether the Congress party itself was serious about the issue or whether this was only a window-dressing to show that, though the Babri Masjid had been demolished under its watch, it was firmly committed to secularism” (Ibid: 237).

At least four undeniably communal parties were ruling in India—the BJP, the Akali Dal, the Shiv Sena and the Muslim League. I had observed:

“The phenomenal rise of communal political parties and organisations during the last two decades, in particular, underlines that the separation of religion from politics would sound the death knell for these parties and organisations, and they would oppose it tooth and nail. It would, therefore, be a miracle if any steps were taken in the matter in the foreseeable future. And unless this is done, any talk of India as a secular state will continue to be meaningless.” (Ibid: 237)

The NDA, headed by the BJP, with the Shiv Sena and the Akali Dal as allies, now has a massive mandate again. It’s further despairing to see that most other so-called “secular” political parties, and in particular, the Congress too, have become disturbingly BJPised. As a result, the objective of separation of religion from politics has to be written off at least in the near future. India will now be practising ‘majoritarian secularism’, if there was one, as a unique experiment. I hope we make a success of it.