154,225FansLike
654,155FollowersFollow
0SubscribersSubscribe
Home Book Extract Supreme Court Verdict: Back to Square One, if not Minus One 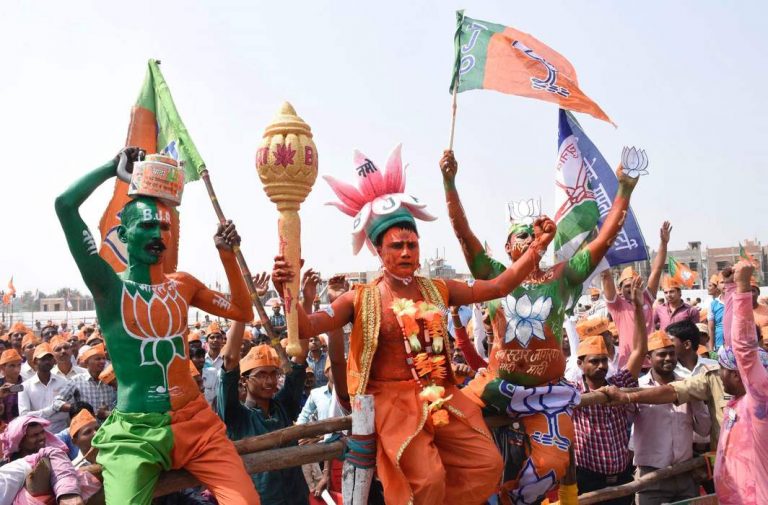 Above: BJP supporters at an election rally. The question of separating religion from politics was identified as a critical issue in 1948/Photo: UNI

The book India’s Governance An incisive commentary on some burning issues is a collection of selected essays. The articles bring into focus the importance of safeguarding secularism in the country

The Supreme Court decision on 2 January on the interpretation of Section 123 (3) of the Representation of the People Act (RP Act) forbidding seeking of votes in the name of religion, race, caste, community or language has made a candidate liable to the risk of being guilty of electoral corrupt practice.

Several political parties such as the Bharatiya Janata Party (BJP) and the Congress have welcomed it. But, looking to the experience so far, the question is whether the judgment is going to make any real difference to the political life of the country.

Though the Supreme Court has declared secularism a part of the basic structure of the Constitution, it has continued to languish in terms of its operationalisation.

No other feature of the basic structure has been neglected so blatantly.

To give just one example, not even a show cause notice has been issued by the Election Commission of India to any political party for contravening the commitment to abide by the tenets of secularism, leave aside taking steps for cancellation of its registration.

It is important to note that the judgment is not unanimous and is based on a slender majority of 4:3.

Attention needs to be invited to the very weighty points raised in the dissenting judgment. The issues raised therein cannot be brushed aside and are bound to come up whenever Parliament decides to go for the revision of the RP Act and attempts suitable constitutional amendments.

The question of separation of religion from politics was identified as a critical issue for the political life of the country way back in 1948, even before the Constitution was promulgated.

The resolution on the subject moved by Ananthsayanam Ayyangar was nearly unanimously adopted by the Constituent Assembly (Legislative), barring the single dissenting vote by Ishaq Seth.

It is a travesty that though nearly 70 years have elapsed, India is still struggling with the question of translating it into a reality.

During this period, repeated observations of the Supreme Court have highlighted how it is helpless in doing justice in the appeals in election cases filed before it as there is no law separating religion from politics.

PB Gajendragadkar, the then Chief Justice, speaking for the Supreme Court in Kultar Singh vs. Mukhtiar Singh (AIR 1980, SC 354) had, inter alia, observed that ‘there are several [political] parties in this country which subscribe to different political and economic ideologies, but their membership is confined to, or predominantly held by, members of particular communities or religions.

‘So long as the law does not prohibit the formation of such parties and in fact recognises them for the purpose of election and parliamentary life, it would be necessary to remember that an appeal made by such candidates of such parties for votes may, if successful, lead to their election and in an indirect way, may conceivably be influenced by considerations of religion, race, caste, community or language.’

‘This infirmity cannot perhaps be avoided so long as parties are allowed to function and are recognised, though their composition may be predominantly based on membership of particular communities or religions.’

In Dr Ramesh Yeshwant Prabhoo vs. Prabhakar Kashinath Kunte (AIR 1996, SC 1113), which is known as the Hindutva case, the court held that the term ‘Hindutva’ is related more to the way of life of the people in the sub-continent.

‘It is difficult to say that the term ‘Hindutva’ or Hinduism, per se, in the abstract, can be assumed to mean and be equated with narrow fundamentalist Hindu religious bigotry or be construed to fall within the prohibition in Sub-section (3) and/or (3A) of Section 123 of the RP Act…’

‘The word Hindutva is used and understood as a synonym of “Indianisation” i.e. development of uniform culture by obliterating the differences between all cultures co-existing in the country.’

I had highlighted in my book, Good Governance Never on India’s Radar (Rupa & Co, 2014, p.158) that this will evoke fears of obliterating the religious and cultural identities of the minorities in the country.

Equally difficult to understand is the logic of the court in its assertion that a mere statement that the first Hindu state will be established in Maharashtra is by itself not an appeal for votes on the ground of his religion, but the expression, at best, of such a hope.

The fact that all these election petitions were based on the speeches made by leaders of the Shiv Sena and the BJP, whose political ideology is based on the furtherance of Hin­du religion at any cost, also has an im­portant bearing on the issues at hand.

Rajeev Dhawan, senior advocate, has recalled how he had appealed the 1995 order the same year, but the court had refused to reopen the judgment except for any problems in technical matters, in case they existed. ‘So that judgment hangs over our heads as Hindutva hangs on our head, as it is a political platform.’

Dhawan has also stated that ‘Justice J.S. Verma (who had delivered the 1995 judgment) too was apologetic about that judgment and said it had been misunderstood.’ (The Indian Express, 3 January 2017).

It was way back in 1996 that a three-member bench of the Supreme Court in the Abhiram Singh case had directed that the issues arising out of the Hindutva case be placed before a larger bench of five judges at an early date so that all questions could be decided authoritatively and expeditiously.

Later, in January 2014, a five-judge bench referred this question to a larger seven-judge bench.

It is unfortunate that this issue has still remained undecided though the Hindutva judgment goes to the very crux of the problem of separation of religion and politics.

Unfortunately, the Supreme Court judgment in January also sidestepped this issue. The inordinate delay in the decision on the Hindutva case underlines the need to ensure that the Supreme Court deals with crucial Constitutional questions expeditiously.

This was also underlined by the question pertaining to the rampant misuse of the Ninth Schedule of the Constitution, which was nothing less than a fraud on the Constitution but was decided by the Court only in January 2007.

The Swaran Singh Committee on Constitutional Reforms, whose recommendations led to the highly controversial 42nd Amendment of the Constitution during the Emergency, had highlighted the Supreme Court’s importance as a Constitutional court.

However, as it often happens, the baby was thrown out with the bath water and the question of ensuring that the Supreme Court discharges its functions as a Constitutional court speedily and effectively still remains to be addressed.

Disturbingly, the dissenting judgment of the Supreme Court has raised doubts whether religion, race, caste, community, language, etc. can be separated from politics at all.

It has rightly underlined that this question should be addressed by Parliament rather than the Supreme Court.

Due to the unnerving memories of the Partition of the country and the poison of communalism which has continued to afflict the country to this day, separation of religion from politics is a matter of serious and urgent concern.

Such an effort was made in 1993 after the demolition of the Babri Masjid by frenzied mobs. But the Constitution Amendment bill and the bill to amend the RP Act failed to get support in Parliament.

This was largely due to the failure of the government in building a political consensus on the subject before introduction of the bills.

It was also due to the fact that the scope of the bills included not just the separation of religion from politics, but also to bring in their ambit race, caste community, language, etc.

The government should have desisted from excessively widening the field of legislation, as many of the concerns pertaining to race, community, caste, and language are already addressed in the Unlawful Activities (Prevention) Act.

If necessary, that Act could have been amended suitably. The thrust of the 1993 amendments ought to have been restricted to eliminating the association between religion and politics.

Other concerns could also be partly dealt with by amending the election law and laying down that a candidate would have to get minimum 50 per cent plus one vote to win an election to a legislature or Parliament.

This would impel the candidates to make an appeal to broader segments of their constituencies.

The issues involved are highly controversial and emotive. Any legislative and other steps taken by the government are likely to be challenged in the court leading to endless litigation. Considerable precious time has already been lost.

I would therefore suggest that the President of India (central government) should seek an advisory opinion of the Supreme Court under Article 143 of the Constitution without any loss of time.

—The author is a reputed bureaucrat who retired in 1993 after serving as Union Home Secretary and Secretary, Justice, among other senior positions in the government