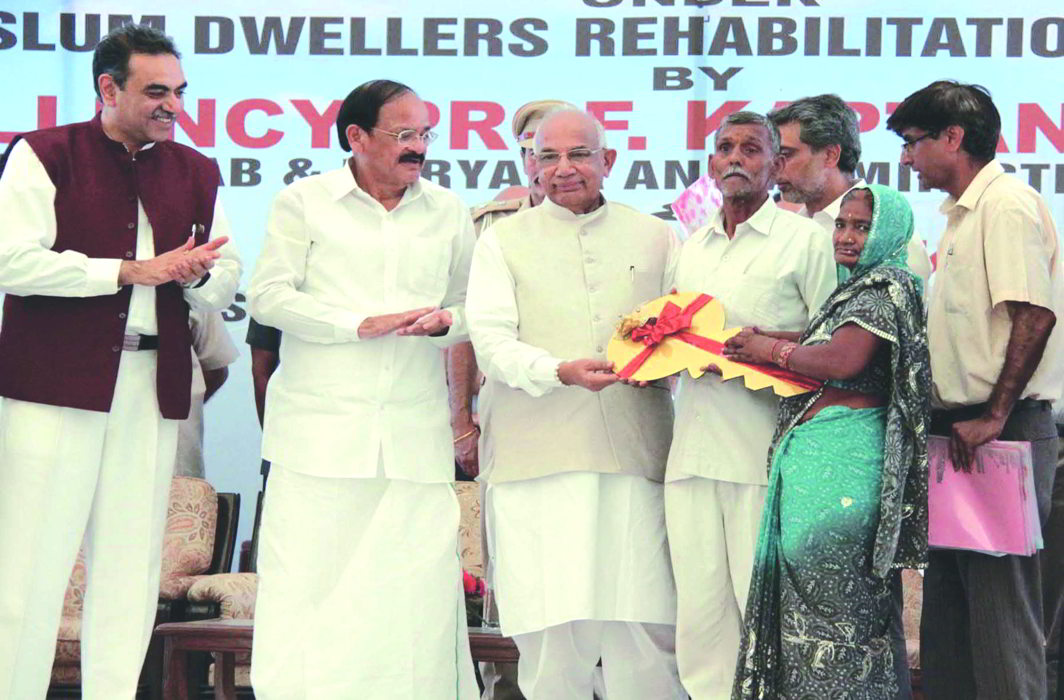 Above: Beneficiaries under the Slum Rehabilitation Scheme receiving flats from the Governor of Punjab and Haryana, Kaptan Singh Solanki, and the then minister of housing and urban poverty alleviation, M Venkaiah Naidu, in Chandigarh. Photo: UNI

One important aspect of the right to property, which is a constitutional right under Article 300A, is that a person should not be debarred from freely transacting without express provision of law. One cannot be prevented from selling, renting or leasing property unless legislation, which has passed the test of constitutionality, specifically prohibits it. In the absence of a specific law, any such restrictions would be illegal.

An order passed on October 26 by Justice Sanjay K Agrawal of the Chhattisgarh High Court in Narayan Prasad Vs State of Chhattisgarh & Ors was based on the above principles. He said that the right to property, besides being a constitutional right, is also a human right.

In this case, the government of Chhattisgarh held that the land which petitioner Narayan Prasad wanted to transfer to another person was non-transferable as it was required for town development. However, the town development scheme was not notified in the Official Gazette as required by Section 50(7) of the Chhattisgarh Nagar Tatha Gram Nivesh Adhiniyam, 1973. Hence, the Court held that the restrictions on transfer and development of the land as imposed by Section 53 of the Act would not apply.

In numerous cases, the Supreme Court has defined the right to property as a key human right. In Indore Vikas Pradhikaran Vs Pure Industrial Coke & Chemicals Ltd. & Ors (2007), the Court said that the right to property is now considered not only a constitutional right but also a human as well as legal right. It observed: “Earlier human rights were existed to the claim of individuals right to health, right to livelihood, right to shelter and employment etc. but now human rights have started gaining a multifaceted approach. Now property rights are also incorporated within the definition of human rights. Even claim of adverse possession has to be read in consonance with human rights. 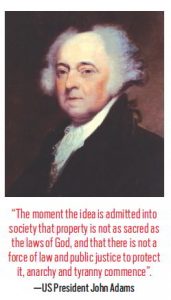 As US President John Adams put it: “Property is surely a right of mankind as real as liberty.” He had added: “The moment the idea is admitted into society that property is not as sacred as the laws of God, and that there is not a force of law and public justice to protect it, anarchy and tyranny commence”.

The Supreme Court in DLF Qutab Enclave Complex Educational Charitable Trust Vs. State of Haryana & Ors (2003) has held that the right to transfer land is incidental to the right of ownership of the land and cannot be taken away without authority of law. It observed: “In these cases, we are not concerned with the question as to whether the provisions of the Transfer of Property Act are applicable in the State of Haryana or not. Ownership of land jurisprudentially involves a bundle of rights. One of such rights is the right to transfer. Such a right, being incidental to the right of ownership, having regard to Article 300-A of the Constitution of India, cannot be taken away save by authority of law.”

In fact, the right to property is classified as a significant human right in important international human rights documents too. Article 17 of the Universal Declaration of Human Rights, 1948, states: “(1) Everyone has the right to own property alone as well as in association with others; (2) No one shall be arbitrarily deprived of his property.”

The (first) French Declaration of the Rights of Man from 1789 states that “property is an inviolable and sacred right”.

Most constitutions of European liberal democracies include bills of rights—often inspired by the American and French ones—that protect the right to private property.

America’s founders and the early European proponents of liberal democracy understood that legal protection of private property against arbitrary interference creates a sphere of inviolability that is necessary for the enjoyment of other freedoms—such as privacy and the freedoms of expression, association, and religion.

If all housing, media outlets, organisations and religious institutions were State-owned, the government would be able to control most parts of its citizens’ lives, direct their productive capacities and quell dissent.

The classical understanding of the right to property primarily entails a “negative” obligation that protects against arbitrary expropriation and regulation of private property. Article 1 of the Protocol to the European Convention on Human Rights says:

This makes it clear that international human rights treaties mandate that no individual should be deprived of his property rights without express provision of law. Thus, where the law is silent or non-existent, the State cannot interfere in the free property rights of a person.

The Chhattisgarh High Court’s ruling is in line with key Supreme Court orders and international principles and marks an important juncture in the jurisprudence on the right to property.