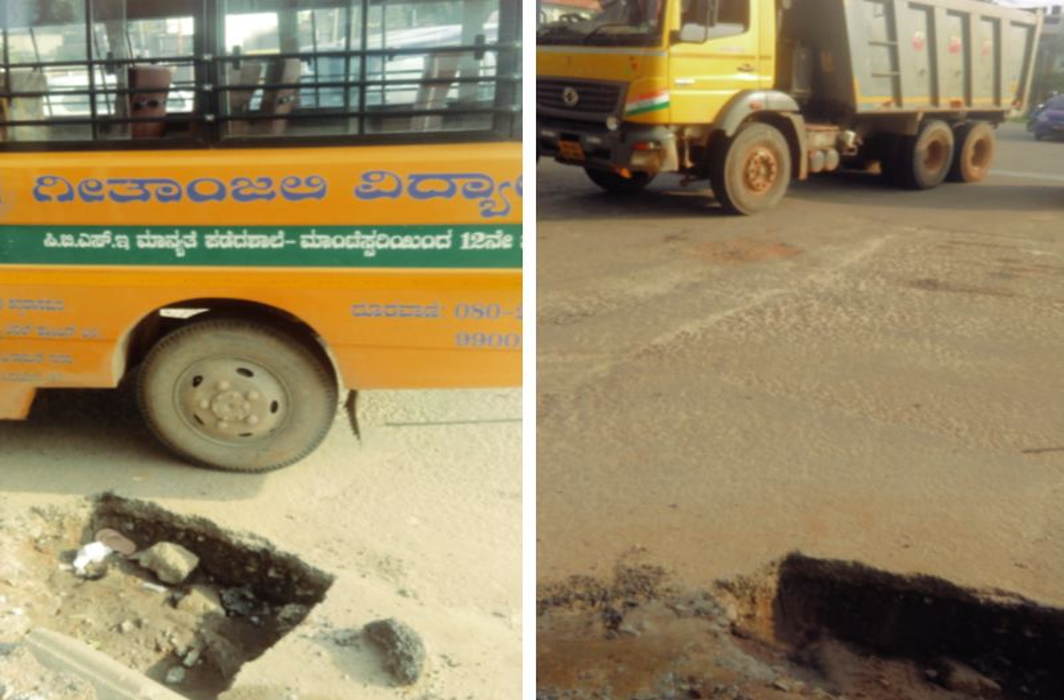 The High Court of Karnataka strongly rebuked the Bengaluru City Corporation authorities  for their failure to fill all potholes in the city by the deadline of October 23 and rejected the civic body’s claim of considerable progress.

“ If the Bengaluru Bruhat Mahanagar Palike (BBMP). cannot do it, some other agency will do it and this will come through an order after announcing BBMP as a failure and it will come with a heavy price,” the court said.  Observing that the civic body had proved its incompetence, the court further orally said: “If BBMP does not work, it does not mean the city will shut down. It only means BBMP will shut down.”

Dismal infrastructure in the state capital  came up before the court  via a PIL filed in 2015. The HC then directed civic officials to plug nearly 15,000 potholes in the city to reduce road accidents. These potholes were throwing traffic out of gear on nearly 14,000 km of roads under the city corporation, Bengaluru Bruhat Mahanagar Palike (BBMP). On September 24 this year, the HC a division bench of Chief Justice Dinesh Maheshwari and Justice SG Pandit said: “Accountability is a factor. You (BBMP) have not been able to earn faith. There is a kind of distrust, dejection or disbelief among people…”

A pothole may be a small matter for a High Court to get involved in, but it is a major killer. In 2017, they accounted for 593 deaths on Bengaluru’s roads and caused economic hardship due to the time lost in traffic jams. Nationwide, potholes swallowed nearly 3,600 lives in 2017.

Karnataka Chief Minister HD Kumaraswamy, too, expressed unhappiness over the slow pace of work by civic officials: “It is sad that we have to get a direction from the honourable high court to repair our roads or keep the city in top condition… the officials must put in all their best efforts for the citizens’ sake,” he reportedly said.

Coincidentally, on September 18, just a day before the Karnataka High Court bench verdict, a Supreme Court bench of Justices Madan B Lokur and Deepak Gupta was given a report by the ministry of road, transport and highways which said that nearly 3,600 people were killed in pothole-related accidents in 2017 in India, higher than those shot dead (800) or killed in terror attacks for the same year. The Karnataka HC cracked down in the past too when it comes to civic amenities. When Justice Vikramajit Sen headed the High Court, he ensured that the sprawling Cubbon Park was kept clean and green. When walkers there brought to his notice nuisance from anti-social elements, he got the state police chief to swiftly take action. Similarly, Justice Michael Saldanha ensured that a landmark like the moat around the government-owned Venkatappa Art Gallery was restored to its former glory and construction debris removed from it.

With road fatalities set to increase by eight percent every year and civic authorities hamstrung by their own challenges, courts are getting into the act to make roads safer.