A Common Form of Torture

Alka Pradhan, an American human rights attorney who represented a Guantanamo Bay detainee, feels that extrajudicial custody and interrogation are becoming more common around the world. 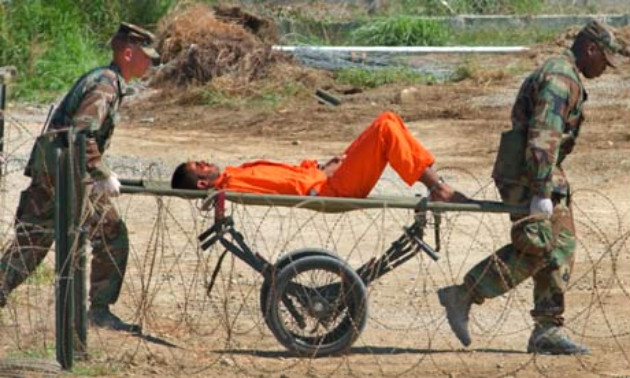 September 11 is etched in the minds of a certain generation. I remember being woken in California, switching on the TV in my living room and watching that second plane in real time on television and wondering sleepily if it was some kind of replay they had managed to film before it dawned on us all that this was a second plane and this was no accident.

Together with the subsequent attacks on the Pentagon these attacks left just under 3,000 people dead that day, and the war against terror was in the works. This resulted in unprecedented protests across the US, with crowds thronging our downtown San Francisco office (I worked for the British government then). They stopped us everyday, pleading with us to get Prime Minister Tony Blair to “talk some sense” into US President George W Bush and not go to war against Iraq.

The war on terror happened as we all know—on both Iraq (pre-emptive doctrine) and Afghanistan (retaliative). In the wake of the attacks, the Bush administration submitted to Congress a draft legislation designed to expand the powers of the government to conduct surveillance, investigate and detain suspected terrorists and the ability to seek Court orders to conduct eavesdropping of wireless/electronic communication.

Guantanamo Bay, an extrajudicial site leased from Cuba, was opened in 2002, to hold members of al-Qaida and alleged accomplices of the perpetrators of the 9/11 attacks. This was soon populated with detainees—not charged—but detained. This form of custody for an alleged crime is carried out without any legal process in place.

There is nothing new about this concept. Politically repressive regimes employ these methods as a matter of course. The Soviet Union used extrajudicial punishment by administrative means as part of state policy. Soviet Bloc secret police and Latin American dictatorships have regularly used it to kill enemies. Re-education was the method employed in China—they would detain persons for petty crimes and give them labour sentences (administrative via the police rather than judicial).

While we may not be all that surprised to hear of these countries employing these tactics, having the US—the land of hope and glory and of liberty and freedom—resorting to extrajudicial means gives everyone the signal that this is somehow acceptable.

Enter Alka Pradhan, the defence attorney fighting for a 9/11 prisoner, Ammar al-Baluchi (Ali Abdul Aziz Ali), in the case of United States vs Khalid Sheikh Mohammed et al—one of the five alleged prisoners. She was formerly with the NGO Reprieve and in 2014, her team sued the US government over force-feeding techniques used on detainees at Guantanamo Bay. The prison has become a thorn in the side of Washington, accused of illegal detention, human rights violations and torture.

Alka Pradhan was in a documentary that provided a rare look inside Guantanamo Bay: Johanna Hamilton’s “The Trial”. She has questioned why a military commission was created and why the US government chose to treat them as “combatants”; terrorist suspects are usually classed as criminals. Also, a law passed in 2011 prevents anyone detained from Guantanamo Bay from coming to America, even if you are found innocent of any crime.

When I spoke to Pradhan last week at a Rotary Club of Madras event, she issued a disclaimer at the start: “Nothing said here is the view of the US Department of Defence.” She then explained how it came about that she had moved to working for the US Government with the Department of Defence and the increased security clearance this gave her and additional opportunities/budget to visit her client, one of the five 9/11 accused alleged conspirators, Ammar al-Baluchi.

Prior to reaching Guantanamo, Baluchi was at a “black site”. These are clandestine jails where prisoners are generally not charged with a crime, and have no legal recourse/bail/court order. A black site, as the name suggests, is an undercover operation where an unacknowledged operation is underway.

On Radio 4’s Art Now, both Pradhan and the accused Ammar spoke about “walling” and this was elaborated upon at the meeting. This process involves placing a towel around his neck and then slamming his head into a wall. Not only was Ammar subject to this “technique”, he was also used for training by novice guards and they then asked him questions. James Mitchell, the very proponent of this method, said that this was excessive. Seven years on, an MRI confirmed the effects on the brain.

She accepted that there are reactions of horror and revulsion at her choosing to defend someone who is reviled, and considered an enemy of the State, but she spoke about the importance of a Defence Bar who can actually guarantee that those accused get a fair hearing. A fair hearing includes access to all evidence that the prosecution has.

Pradhan believes the treatment the detainees are receiving is related to their skin colour. She has said in the past: “If we had white guys from, you know, France being held, I remain convinced they would not have been tortured, I don’t think”. “I don’t think they would have founded an entirely different legal system for them.”

Anyone who has studied law or just society would agree with this assessment. There are simply too many disparities in the treatment meted out. The international norms, she points out, are that countries do not execute those they have tortured. The Geneva Convention 1950 mentions that Prisoners of War (PoW) must never receive any form of violence, torture, degrading treatment and so on. The reason for classifying these detainees as something other than PoWs becomes clearer if the CIA was planning to torture detainees to extract information.

As far as the extrajudicial confinement of Ammar-al-Baluchi is concerned, the pre-trial procedure has taken nine years and counting; one wonders if the actual trial will ever begin. She maintains that she does not believe there is any real evidence the government has that is not tainted by his torture. This then begs the question: why continue to hold him?

The future of Guantanamo remains up in the air. President Joe Biden has vowed to close it, but there are still 39 detainees living there and it is unclear what will be done with them. The issue with closure now is that even if they are no longer enemy combatants, nobody wants them. Military Commissions have presumptions of innocence eviscerated. Backing out of the 9/11 trials is also extremely politically sensitive. This is a show trial and the show must go on.

When The Mauritanian was first published as Guantánamo Diary in 2015—heavily redacted by the US government—Mohamedou Ould Slahi was still imprisoned at the detainee camp in Guantánamo Bay despite a federal court ordering his release. And it was unclear when or if he would ever see freedom. In October 2016, he was finally released and reunited with his family. During his 14-year imprisonment, the US never charged him with a crime.

As for the charges faced by Ammar are concerned, transfer of funds was never a death penalty crime, nor is it clear what the funds were intended for. What he knew and when is the question to be addressed. The trouble is that his uncle was Khalid Sheikh Mohammed, the mastermind of 9/11, and this is the weakest point.

If we contrast here the Nuremberg trials, the most historic war crimes tribunal ever held, Ben Forenz, the prosecutor, has spoken about these at length and described how he put into evidence all the written notes available about what they (the Nazis) had done. He affirmed the rule of law, and all the former Nazis on trial were found guilty and hanged. Forenz went on to help set up the International Criminal Court in The Hague.

When asked if extrajudicial custody and interrogation are becoming more common around the world, Pradhan’s response was that this is not new but the public way in which it has been done and the refusal to back off has encouraged people around the world. In Africa, the CIA has trained militias, China has camps of Uighers—we (the US) can’t say anything as there is no moral ground to stand on at the moment—says Pradhan.

—The writer is a barrister-at-law, Honourable Society of Lincoln’s Inn, UK, and a leading advocate in Chennai. With research inputs from Jumanah Kader