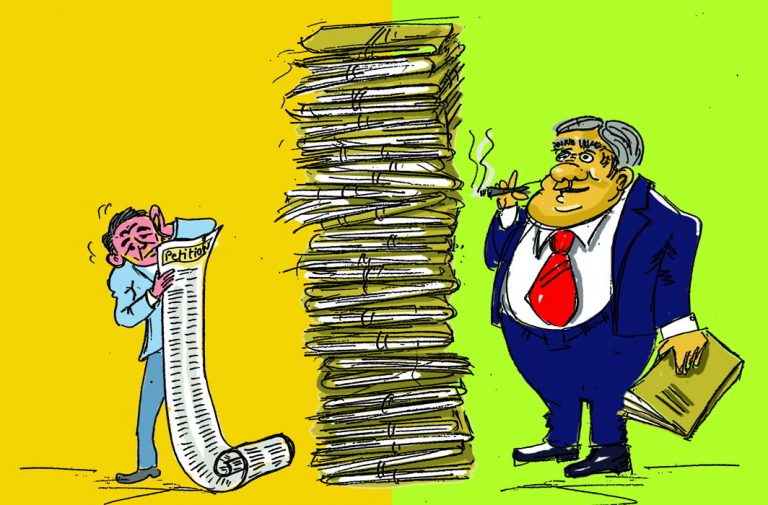 The large number of cases is due to non-application of court pronouncements and the system of appealing against all judgments. Is it time to have a law to tackle this menace?

Why are so many cases pending in Indian courts, given that Indians are not a particularly litigious people? It takes several years before a case comes up for hearing and, sometimes, 20 years or more before it is finally disposed of. In order to find out the real reasons for pendency, we have to first look at the genesis of the court cases and the implementation of judgments.

A case can arise if the wording of a statute or government order is ambiguous and a person is affected adversely because of its interpretation. In the process of disposal of cases, the correct interpretation of the statute is determined. If the final judgment is in favour of the affected person, he gets relief.

But as a statute or order affects many people, what happens to people other than the litigant who have also been adversely affected by the incorrect interpretation construed by government officials? If the government does nothing about the others, each one of them will be forced to file a case. Thus, a large number of cases will be filed in courts notwithstanding that the legal issue in the matter has already been decided by the court.

Just by issuing a circular about how the order is to be interpreted in view of the court decision and what follow-up action is to be taken, the government can prevent the filing of many unnecessary cases, some of which go right up to the Supreme Court. Not only are such circulars not issued, but decisions in favour of citizens are invariably appealed against.

Needless to say, unnecessary litigation involves an enormous waste of national resources and injustice and harassment to ordinary citizens.

So why do we have such a peculiar system? Why do government officials not issue appropriate circulars after definitive court judgments? There are three interrelated reasons for this—rampant corruption, high levels of incompetence and almost complete lack of accountability of the concerned officials.

Corruption in India is many-faceted. A large number of appointments are made in exchange for money or other considerations. When a person is appointed to an office for which he is unfit, wrong decisions abound. If officials in charge of applying laws and orders do not have the requisite level of competence, then even if there is no ambiguity in them, their misapplication can give rise to court cases.

While learning for a job takes place by trying to do it properly, officials whose actions are primarily determined by corrupt considerations (even if they were appointed on merit) do not acquire the required expertise. Thus, corruption invariably leads to some incompetence and when it becomes rampant, so does incompetence. There is no denying that Indian bureaucracy is seriously afflicted by shockingly high levels of corruption and incompetence. While a large number of court cases arise because of misinterpretation of rules, many are also due to misapplication of the relevant orders either because of incompetence or corruption.

Nothing exemplifies the system of government officials appealing every case currently in vogue better than the case of DTC conductor Ranvir Singh who in 1973 allegedly charged a passenger 10 paise instead of the correct amount of 15 paise. A departmental inquiry found him guilty of causing a loss of 5 paise to the public exchequer. Litigation started after his dismissal in 1976. The labour court in 1990 decided in his favour. DTC appealed in the high court, which dismissed it in 2008. DTC again moved the high court through a review petition in 2008.

There is one aspect of Indian bureaucracy which just does not make any sense in the context of a democracy governed by the rule of law. When a person is adversely affected by an act of omission or commission by a bureaucrat, all the costs are borne by the victim. The bureaucrat’s action or non-action could be contrary to the law, a misapplication of it or dereliction of duty. But the official will not have to pay the price for it. It is for the victim to decide whether to accept the injustice and loss or file a court case and wait for several years for justice to be delivered.

Everyone knows that it takes many years to get any relief through the legal route in India, so most individuals have no alternative but to put up with the injustice. Closing of the legal route for all practical purposes has turned even petty bureaucrats into minor despots.

One implication of the rule of law is that anyone who transgresses it will be held accountable. Also, everyone is protected by law and has legal recourse for relief. Due to the peculiar bureaucratic system in the country, neither of these two fundamental aspects of the rule of law hold uniformly. Bureaucrats can and do act against the law of the land and victimise those with little economic or political clout for monetary gains, or because of incompetence or a perverse sense of power. Violations of law by bureaucrats against ordinary citizens invariably go unpunished. Thus, with respect to such violations, Indian bureaucrats for all practical purposes are above the law. And because courts have a large number of pending cases, for those with little political or economic clout, there is no protection of law.

This state of affairs has a deleterious effect on the country. Due to such a large quantum of litigation, there is an enormous wastage of national resources, which if freed, can be used for wealth creation. Also, a large number of cases signify too many cases of injustice. Too much injustice can seriously hamper nation-building. Thus, it is of utmost importance that this problem be solved on an urgent basis.

As the genesis of this problem lies in the corruption and incompetence of a large section of the bureaucracy, a permanent solution would have to involve a mechanism by which the competence levels of bureaucrats are raised and corruption decreased. A dent in the situation can be made if there is a law which makes bureaucrats personally accountable for acts of omission and commission.

Under RTI, anyone can seek information regarding any public matter regardless of whether the person has a locus standi in it or not. A similar law is needed for filing cases against bureaucrats in courts especially created for the purpose. Anyone should be able to file a case against a bureaucrat for acts of omission and commission. This will enable public interest lawyers to file cases against bureaucrats who do not conform to laws and regulations. This is essential as most victims of bureaucratic violations of laws happen to be people whose circumstances make it difficult for them to litigate. The erring bureaucrats should be made responsible and monetary penalties structured in such a way that there is a substantial decrease in such bureaucratic acts.

Central and state governments can set up departments for examining court judgments and issuing the requisite circulars whenever any judgment applies to a class of persons rather than just the litigant. When the litigation is regarding the meaning and interpretation of a law and the court has made a definitive pronouncement, it can also direct the government to issue relevant circulars.

The writer is ICSSR National Fellow and ex-professor, JNU