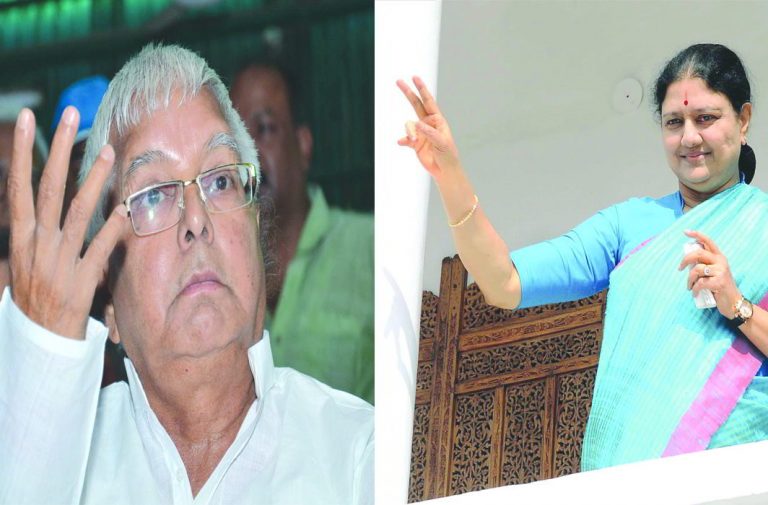 Above: Rashtriya Janata Dal chief Lalu Prasad Yadav is facing a slew of corruption cases whereas AIADMK leader Sasikala was convicted in a disproportionate assets case and is in prison

Though the Election Commission wants a life ban on convicted MPs and MLAs contesting polls, the former chief election commissioner says there are already sufficient legal provisions to punish such people and kill their political careers

The Supreme Court recently heard a petition filed by Delhi BJP leader Ashwini Kumar Upadhyay seeking a lifetime ban on convicted and charge-sheeted MPs and MLAs in electoral politics. The current law, under the Representation of the People Act (Section 8), 1951, debars convicted politicians from contesting elections for a period of six years following the date of release from prison.

The PIL argued that while judges and public servants are dismissed from service and face a lifetime ban from government service once convicted, it is only fair that the same be the case for the people’s representatives as well. According to the petitioners, the discrimination between public servants and politicians violates Article 14 of the Constitution which prohibits discrimination between two classes of citizens.

The Election Commission of India took a stand, stating that the matter falls in the domain of the parliament. The Supreme Court, reprimanding the EC, said: “Can you afford to remain silent when it is within the domain of the commission? If you don’t want to be independent, if you want to be constrained by the legislature, constrained even to express your views, say so freely.” This harsh rebuke was unprecedented for the EC.

Upon being pulled up by the apex court for not taking a proper stand on the issue, the Election Commission finally submitted an affidavit to the Court supporting a lifetime ban on convicted politicians contesting elections. If the Supreme Court were to go ahead with the EC’s recommendation, it would mean an end to the political careers of many prominent leaders.

The centre, on the other hand, took a stand in stark contrast to the EC’s. In its affidavit, it said that the plea was not maintainable and must be dismissed, and that the existing rule is in no way a violation of Article 14. The affidavit, shooting down the proposal to tinker with Section 8 of the RPA, said that the Article already provides constitutionally prescribed limits regarding the disqualification of convicted politicians and that no further restriction or disqualification can be applied to the Act.

The then Chief Justice of India, JS Khehar, commenting on the issue, noted that a lifetime ban on convicted politicians impinges upon the will of the people as they should be free to choose whoever they want as their representatives. Justice Khehar said: “Murder may not be a bar to fight elections. The court can only give a sentence and make it clear that someone is a murderer.”

Chintan Chandrachud, prominent lawyer and scholar based in London, in an article in The Hindu notes that the Supreme Court has lately announced a series of decisions modifying the election process. These include—the citizen’s right to cast a “none of the above” vote, disqualification of prisoners from standing for elections during periods of incarceration, the judgment that “concealment of criminal antecedents constitutes a corrupt practice under the law and that electoral appeals to caste and religion are impermissible”. The judgment to ban convicted criminals from contesting elections may well be the last decision in the longlist of recent electoral reforms. Chandrachud, however, argues that such a rule might well be in violation of people’s right to vote and to contest elections. Both the rights are “fundamental markers of citizenship in a constitutional democracy”. In sync with Chief Justice Khehar’s comment, the article argues that while the Supreme Court must introduce transparency-promoting measures, it can, at the same time, not take away the rights of the citizens by debarring them from permanently contesting elections.

While the PIL and the subsequent debate around it has once again brought to light the need to decriminalise politics, the issue itself has three dimensions:

For three offences mentioned in sub-section(2) of Section 8, disqualification arises when convicted and sentenced to imprisonment of six months or more. The offences are (a) under Dowry Prohibition Act, Act relating to prevention of profiteering and hoarding and Act relating to adulteration of food and drugs. For all other offences, which are not listed in sub-sections (1) and (2), disqualification arises when convicted and sentenced to two years’ imprisonment or more. Thus, if a sitting member is convicted and attracts disqualification under the above mentioned provisions of Section 8, he/she will lose the seat immediately as per the recent SC judgment in the Lily Thomas case.

In 2003, in the Lily Thomas Vs Union of India case, the Supreme Court passed a landmark judgment on the issue of criminalisation of politics. It stated that any politician who is convicted of a crime and sentenced to a minimum of two years in prison, loses membership of the House with immediate effect. The bench said: “The provisions of Article 101(3) (a) and 190 (3) (a) of the Constitution expressly prohibit Parliament to defer the date from which the disqualification will come into effect in case of a sitting member of Parliament or a State Legislature.”

Regarding the issue of dealing with politicians post-conviction, I agree with the two opinions mentioned above. I believe that while criminalisation of politics is one of the major evils plaguing Indian democracy, a lifetime ban on politicians is too extreme. A six-year ban, following two years’ minimum imprisonment, is already enough to kill any person’s political career.

Further, I believe a distinction needs to be drawn between convictions for heinous crimes—murder, attempt to murder, rape, crimes causing communal disharmony, dacoity, kidnapping, treason—and crimes such as disruption of law and order owing to politicians participating in a protest/dharna or prohibiting a public servant from discharging his/her duty, possession of an unlicensed firearm, traffic offences, and so on. To treat both sets of crimes equally and to impose a life ban on politicians convicted of crimes of the latter category is indeed against the democratic ethos of the country.

Coming to the larger debate surrounding the criminalisation of politics in India, according to the Association for Democratic Reform’s (ADR) analysis of the EC data, 187 MPs in the current Lok Sabha face criminal charges (ie, 34.4 percent). Of them, 113 face serious criminal charges. The number has gone up from 162 (76 serious) charges in 2009 and 128 (58 serious) in 2004. This obviously shows the political class and legislature in a poor light.

As proposed by me earlier, I believe that there are three possible solutions to the issue:

In a judgment in 2014, the Supreme Court directed the lower courts to conclude proceedings against politicians accused of serious crimes within a year. The government wrote to the states to provide full support and implement the judgment. The step, however, failed due to two reasons—the humongous burden on the lower courts that have an average of 4,000 cases a year and the argument that such a step discriminates against other equally important pending cases in the lower courts. Following this, the apex court, revising its earlier decision, has ordered the setting up of special fast-track courts for the trial of tainted politicians. It has asked the government to provide the necessary funds.

The Law Commission in its reply to the PIL in 2011 had said, “Disqualification upon conviction has proved to be incapable of curbing the growing criminalisation of politics, owing to long delays in trials and rare convictions. The law needs to evolve to pose an effective deterrence, and to prevent subversion of the process of justice.”

There are more desirable ways of preventing criminalisation of politics than life bans, chief among them being discouraging parties from giving tickets to such people. Public education about not voting for tainted politicians can also be a crucial step. As there is a condition that all contestants filing an affidavit should declare all pending cases against them, steps have already been taken in the right direction. While repeat offenders and those who have committed heinous crimes need to be punished, offenders charged with milder crimes should not be subject to the same punishment.

—The writer is the former Chief Election Commissioner of India