A Bridge too Far?

There is a faulty understanding of the hybrid system of marriage laws. Votaries of a uniform civil code should see Law Commission reports proposing a central Marriage Registration Act and revision of the Special Marriage Act. 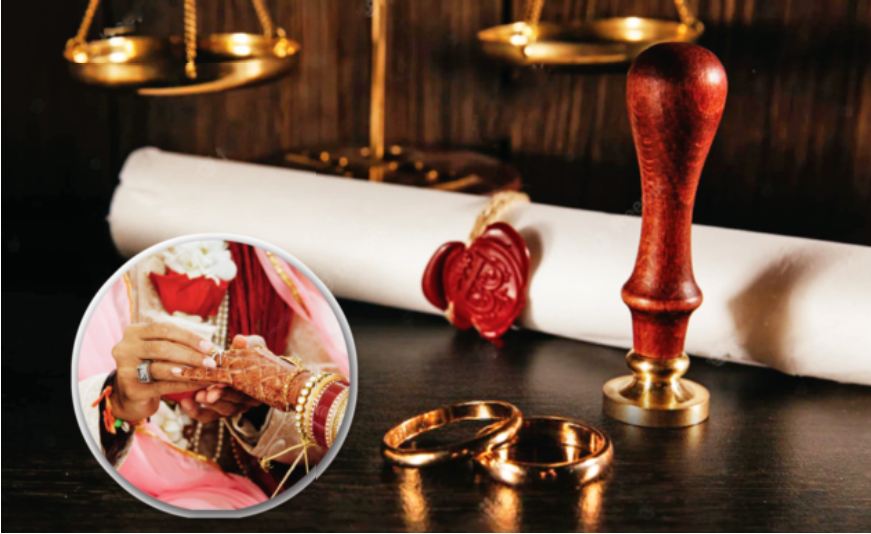 The media recently reported a case in which the Madhya Pradesh High Court had directed the Arya Samaj to solemnise marriages among its followers in accordance with the Special Marriage Act of 1954. The matter reached the Supreme Court in appeal, where a bench headed by a Christian judge, KM Joseph, promptly stayed the High Court decision, which was prima facie wrong.

And now comes a story from Maharashtra in which the Bombay High Court has taken cognisance of a case of a Christian girl whose marriage certificate issued by church functionaries was not accepted by local Aadhaar card officials. The newly married girl had submitted the certificate to the concerned office for adding her husband’s surname to her maiden name on the card, which is a common practice among Christians. Refusing to accept it, the concerned officials gave her two options—either remarry before a local marriage officer appointed under the Christian Marriage Act of 1872 or register marriage under the Special Marriage Act of 1954. The High Court has sought the centre’s response to the issue.

Both these cases are evidence of the faulty understanding of the hybrid system of marriage laws prevailing in India. Matrimonial relations in the country lie in the domain of religion-based personal laws. People usually marry within their own communities and their respective personal laws, therefore, necessarily regulate all aspects of their marriage. Marriages among Hindus, Buddhists, Jains and Sikhs are now governed by the Hindu Marriage Act of 1955. To Muslim marriages applies the uncodified Muslim personal law, subject to the provisions of a few Acts, the latest being the Muslim Women (Protection of Rights on Marriage) Act, 2019. Marriages among Christians are regulated by two old laws of the pre-independence era—the Indian Divorce Act, 1869 and the Indian Christian Marriage Act, 1872. These Acts apply to marriages where both parties are Christians, as also to those between a Christian and a non-Christian.

As a secular alternative to all these personal laws on marriage, a Special Marriage Act was enacted by Parliament in 1954. It does not, however, compulsorily apply to any person and is only an enabling law containing rules for civil marriages. Any man and woman, whether professing the same religion or different religions, can become husband and wife by voluntarily opting to marry under this Act. In the cases of a difference of religion, neither party needs to convert to the other party’s religion.

If a Hindu, Buddhist, Jain or Sikh marries within these four religious communities (same or different), the Hindu Marriage Act, 1955 will apply to them. The Act makes it abundantly clear that all “forms and developments” of the Hindu religion are within its ambit. In this respect, the Act specifically mentions followers of the Arya Samaj, along with those of the Brahmo Samaj and Prarthna Samaj. These sub-denominations within the broad Hindu religion were formed in the late 18th and early 19th centuries by some prominent social reformers—the Brahmo Samaj by Raja Ram Mohan Roy in Bengal, the Prarthna Samaj by Atmaran Pandurang in Maharashtra and the Arya Samaj by Swami Dayanand Saraswati in Gujarat.

The classical Hindu law, which was in force till the enactment of the Hindu Marriage Act, classified inter-caste marriages into two categories—anulom (boy of a higher and girl of a lower caste) and pratilom (boy of a lower and girl of a higher caste)—and strictly prohibited both. The Arya Samaj did not believe in this restriction and its priests freely solemnised all sorts of inter-caste marriages. As some courts doubted the validity of such marriages under the classical Hindu law then in force, at the behest of Arya Samaj leaders of the time, an Arya Marriage Validation Act was enacted by the central legislature in 1937. It laid down: “Notwithstanding any provision of Hindu law, usage or custom to the contrary” no marriage among the Arya Samajis shall be invalid “by reason only of the fact that the parties at any time belonged to different castes or sub-castes” of the Hindus. The Act remains in force till date and has not been repealed by the Hindu Marriage Act 1955, which also, of course, permits inter-caste marriages.

The Hindu Marriage Act required state governments to make rules for registration of marriages to facilitate their proof, but did not make it compulsory (Section 8). After the Supreme Court directed in Seema vs Ashwani (2006) that registration of all marriages among all communities should be made compulsory, new rules were made in almost all states to comply with the direction. Arya Samaj marriages always were and still are registered under these Rules as religious marriages governed by the Hindu Marriage Act. Of course, all Hindus—not only Arya Samajis—intending to marry can voluntarily opt for a civil marriage to be governed by the Special Marriage Act of 1954.

The Indian Christian Marriage Act of 1872 is a bulky law consisting of 88 Sections and three Schedules. Unlike the Indian Divorce Act 1869 (also meant for Christians), which has been suitably amended after Independence and brought on a par with other statutory marriage laws, this Act remains on the statute book in its original version. Full of outdated expressions, it contains separate provisions for “Christians” [those of foreign origin] and “Indian” Christians [those of Indian origin]. Part VI of the Act [Sections 66 to 76], titled Marriages of Indian Christians, applies to cases where both parties are Indian Christians. Rest of the Act relates to solemnisation and registration of marriages by the clergymen of the Anglican, Scottish and Roman Catholic Churches. Marriages among Indian Christians can be solemnised under this Act by church functionaries, marriage registrars appointed under the Act or “persons licensed under this Act to grant certificates of marriage” to them. In the case of the Maharashtra Christian girl seeking change of name on her Aadhaar card, the officials refused to accept a marriage certificate issued by the church and insisted on one issued by a marriage registrar under the Act. The alternative course of action for the girl, in their opinion, would be to register her marriage under the Special Marriage Act of 1954.

Those who insist on registration of religious marriages under the Special Marriage Act seemingly have a faulty understanding of Section 15 of the Act. This is a provision not for general registration of marriages available to all persons but for voluntary conversion of a religious marriage into a civil marriage. If it is availed by a married couple, their marriage in all respects will be governed by this Act—and no more by the parties’ personal law under which it might have been originally solemnised.

So, if married couples belonging to the Arya Samaj register their marriages under this Act, the Hindu Marriage Act would cease to apply to them. Similarly, if the Maharashtra Christian girl registers her marriage under the 1954 Act, both the Indian Divorce Act and the Indian Christian Marriage Act will automatically become inapplicable to her. In either case, this will mean forcing unwilling people to convert their religious marriages into civil marriages. Obviously, this could not have been the intention of the legislature behind Section 15 of the 1954 Act.

At present, every state in India has its own law relating to registration of marriages. However, the Special Marriage Act, which is not wholly free from discriminatory provisions, does not apply in some states and Union Territories. Fifteen years ago, as a member of the Law Commission of India, I had written two reports containing a proposal for enacting a central Marriage Registration Act and for revision of the Special Marriage Act to make it a fully secular and nationwide law (Reports No. 211 & 212 of 2008).

Endorsed by the Commission in toto, these were duly submitted to the government, but are still gathering dust in the Law Ministry. A recent document of the Commission suggesting necessary amendments in all personal laws to ensure gender justice (Consultation Paper, 2018) has also yet not received any official response. When will the vociferous votaries of a uniform civil code take cognisance of all this work of the Commission—the government’s advisory body on law-making—is anybody’s guess.