Pray, Why Were Rules Flouted?

The Temple saw J&K L-G Manoj Sinha offering prayers there, despite it violating ASI rules. By revitalising sites of Hindu temples, a clear strategy is being etched out which will pay dividends during polls. 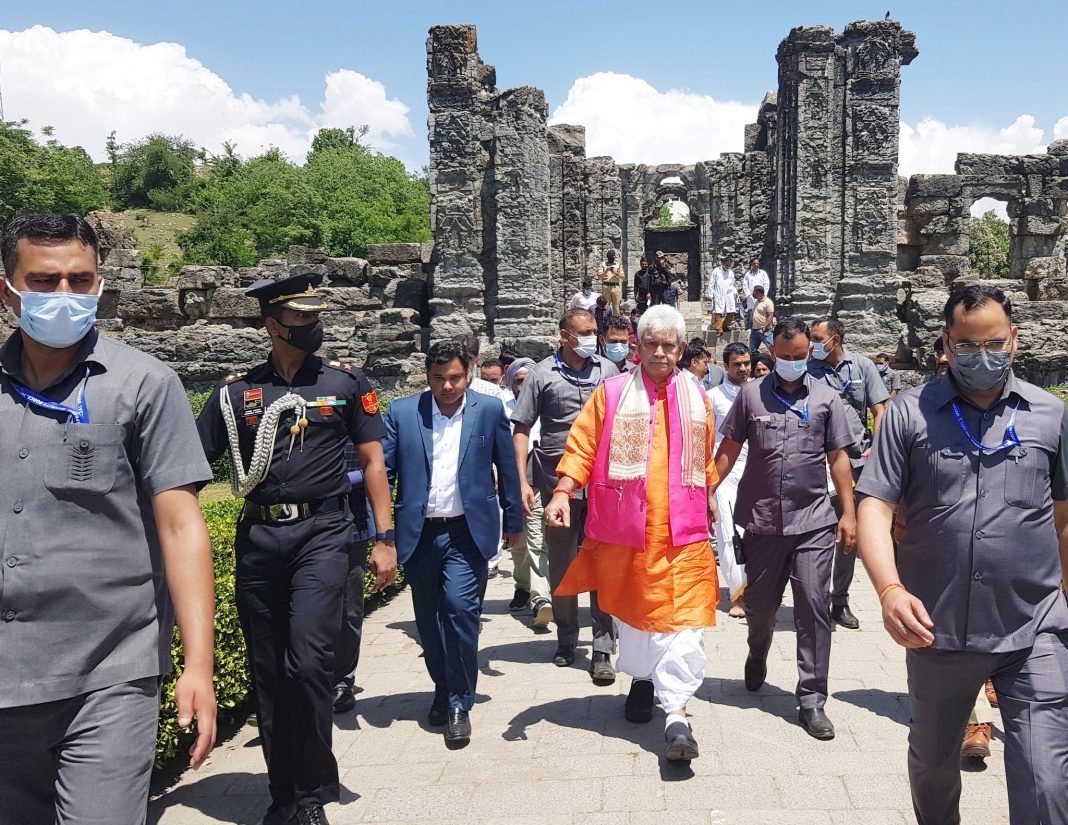 Monarch of the 8th century Karkota dynasty Lalitaditya Muktapida would surely be happy that prayers were offered recently at Martand Sun Temple, which he had commissioned, in Anantnag district of Jammu and Kashmir (J&K). The prayers took place centuries after the Temple’s destruction in the 14th century and much after the Archaeological Survey of India (ASI) took charge of the ruins. Therein hangs a tale.

To be precise, prayers were offered twice at Martand Temple. The second time it had among the assembled devouts, J&K Lieutenant-governor Manoj Sinha. This was done with the district administration’s permission, even though it requires the centre’s clearance.

The ASI has been up in arms against the offering of prayers at the monument. Its officials have been anonymously quoted by several newspapers, crying murder. The rules are clear and yet subject to interpretation, or so it seems, as far as the district officials who gave the function the go-ahead are concerned.

The Ancient Monuments and Archaeological Sites and Remains Rules 1959, has stated in Rule 7, across two sub-sections under the head “Holding of meetings, etc. in monuments”, that:

“(1) No protected monument shall be used for the purpose of holding any meeting, reception, party, conference or entertainment except under and in accordance with a permission in writing granted by the Central Government.

“(2) Nothing in sub-rule (1) shall apply to any meeting, reception, party, conference or entertainment, which is held in pursuance of a recognized religious usage or custom.”

Despite this, bureaucrats have on the one hand banned and on the other, permitted via an opened loophole the “recognized religious usage or custom:”. It is to be noted that no prayers are on record at the Martand Sun Temple site ever since the ASI took it over. The prayers were also not made at the garba griha, but on a platform far away from it. So how it becomes a recognised usage or custom is subject to interpretation.

The prayers at Martand also violate another ASI rule: that of living and non-living monuments. If the ASI took over a temple or mosque where prayers were being offered, it would allow them to continue, like the Friday namaz in the Taj Mahal, attended by local residents on showing an ID card. The ASI in Kashmir also allows prayers at other protected shrines, including the famed Sankaracharya Temple. But attempts to pray without permission in Kashmir have not been seen as intransigent as in Delhi, where the non-living Ferozeshah Kotla becomes a venue for prayers.

Some 10 years ago, much controversy was courted when residents of Mehrauli were barred from praying at the Jamali Kamali mosque in the Qutub Complex. Similarly, Siri Fort also has a mosque where prayers cannot be performed and which saw a similar incident. Then the turf war was between the Delhi Waqf Board and the ASI. Slogans were raised, but the electoral impact was minimal. This was much before Anna Hazare pitched camp in the capital to force a new turn in Delhi politics. This was a Muslim demand, but without sufficient political juice to keep it alive, the ASI rules won.

With an increase in population, the devout choose to pray at sites where they were not meant to be praying.

That may be the case in Delhi; in Kashmir, the point is elsewhere. By revitalising sites of Hindu temples, a clear strategy is being sketched out that would reap dividends with the current controversy over the delimitation of the erstwhile state.

With Jammu getting more seats in the proposal, feelings in the Valley are anything but certain. The Jammu and Kashmir Delimitation Commission had increased the UT assembly strength from 83 to 90; Jammu which had 37 seats suddenly found itself with 43 seats, and Kashmir, which had 46 seats, now has 47. Political parties in the Valley are outraged at this increase in seats for Jammu, which is said to be disproportionate to the UT population ratio between J&K, empowering any party that wins all seats in Jammu to hold Kashmir to ransom.

The edge of 2019 is being revisited in the UT with targeted killings of people who made Kashmir their home after the abrogation of Article 370. One of them, Rahul Bhat, was shot dead by two terrorists at a tehsildar’s office in Budgaum district. Other migrants who came to the Valley have also been attacked in what is being read as a terrorist ploy to dissuade new settlers. The new migrants are beseeching the UT authorities to relocate them from the Valley to Jammu in a bid to avoid terrorist ire. Resettlement, as was said of revolution, is no dinner party. It changes the population demographic and is being opposed violently by terrorists said to be doing Pakistan’s bidding in the Valley.

The three events—the prayers at Martand, the delimitation commission report and attacks on migrants—are pointers to the election the UT has not had since November 2018 when then Governor Satyapal Malik dissolved the assembly. The political realignment which is being imagined is that a total victory in the Jammu region, along with strategic tie-ups in the Valley, will propel the BJP forward to forming a government there without having to put up with a troublesome ally.

With the newfound developments in the Gyanvapi Masjid that abuts the Kashi Vishwanath Temple and amid increasing calls for Mathura’s Krishna Janmabhoomi, politics in north India is matching the heat wave, registering under 50 degrees Celsius.

Sylvan Kashmir is warming up too. If a shivling can be found in a mosque built on the remains of a temple, what in heaven can prevent prayers to the Sun god in Martand? Rules remain on paper without enforcement, and polarisation snakes an invisible barbed wire through Mughal Emperor Jahangir’s paradise.

The writer is Editor, IndiaLegalLive.com and APNLive.com