Odissi exponent Guru Mayadhar Raut was evicted from his government flat in Delhi’s Asiad Village by the Directorate of Estates without looking at his contribution and his 90 years. Other artistes have also been given notice. 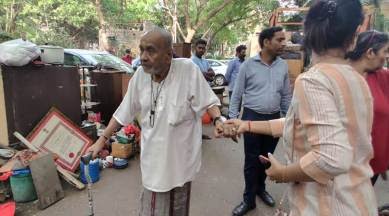 On March 31 this year, Lok Sabha MP Chirag Paswan, the son of former Union Minister Ram Vilas Paswan, found himself evicted from the 12 Janpath bungalow allotted to his deceased father, as accountants and bookkeepers of the country spent a harrowing time balancing their books as financial year 2021-22 wound to a close. A few of the next day’s newspapers carried the photos of portraits, busts of Paswan Senior and books lying strewn outside the house. The Directorate of Estates of the Ministry of Housing and Urban Affairs had done this after issuing sufficient notice. It was also pointed out by an official of the Directorate of Estates that Chirag Paswan himself had his MP flat and 12 Janpath had been allotted to Paswan Senior.

Posit this with the sight of a 90-year-old man unable to finish his lunch because the very same Directorate had to make good its promise to evict him from the Asian Games Village in Delhi on April 25. Delhi saw temperatures rising above 40 degrees Celsius that week. But the State knows no bounds when it has completed its statutory duties of issuing notice and answering petitions against it in court. A day before his and others’ appeal against the eviction notice was to be heard in the Delhi High Court, Odissi exponent Guru Mayadhar Raut found that his home in official Delhi’s plush residential colony was being emptied of his belongings by the Directorate of Estates’ personnel.

Guru Raut is the first of the evictees. A Padma Shri awardee, social media shared a photo of Guru Raut standing shocked in a kurta and lungi, with someone holding his left hand and his right hand gripping a walking stick uncertainly. In the background among the various belongings stacked up against Sintex water tanks and parked cars, lay his Padma Shri citation. Awarded the Padma Shri in 2010 for his contribution in making Odissi a classical dance form, this former disciple of Rukmini Devi Arundale had been seminal in making Odissi shed the pejorative folk tag that had been associated with the dance form, said a First Post report.

The others under the Directorate of Estates’ harsh glare include Kathak maestro Birju Maharaj, now deceased, classical singer Wasifuddin Dagar, painter Jatin Das and Mohiniyattam dancer Bharati Shivaji, who is looking for a house before such humiliation befalls her and her 98-year-old mother, an Indian Express report said. The last extension the 27 artistes had got was in 2014; it was meant to be extended every three years. The Directorate of Estates issued notice to 27 artistes in 2020 to vacate their government accommodation, which is when they moved court and lost the case in a lower court. Their appeal was to come up on April 26, the day after Raut’s humiliating eviction. Guru Raut had been allotted the flat sometime in 1997, a good 25 years ago.

Asian Games Village was built to house athletes, coaches and support staff for the visiting contingents from Asian countries for the Asian Games 1982. The occasion was India holding a prestigious multi-disciplinary sports event, apart from the hockey and cricket tours, under then Prime Minister Indira Gandhi’s celebration of India in what would be her last term in power. With the Games Village lying unoccupied after the fortnight-long event, the government decided to allot the quarters for central government employees, college professors and teachers. Later on, it thought of housing artistes from music, dance, literature and other allied fields if they were earning less than Rs 20,000 per month. This was under a scheme of the culture ministry, reported The Hindu.

Music, dance, theatre, literature and cuisine are ingredients of culture. The cultural identity of one’s nation is defined by the music and dance of the area it encompasses. Further, with the credo “unity in diversity” at the heart of India’s imagined nationhood so deftly sewn into the Constitution, the many forms of dance, classical and folk music merge into one harmony, best exemplified by the Mile Sur Mera Tumhara ad spot of the late 1980s. But there was tumult ahead. The Congress government of Rajiv Gandhi was voted out in the face of a multi-party coalition that comprised the BJP, the Left and the regional parties. The BJP’s numbers as many would remember came because of its demand and support for the Ram Mandir at Ayodhya. Without State patronage, the arts are at a disadvantage. Imagine if the Kathak vidwan had to work a 9-5 job and still find time to devote to her or his passion. Not that some don’t, but they will then be practising a staid, dead form of art instead of breathing and living it.

Gone are the days when art was for art’s sake, with the interest on savings bank accounts and fixed deposits diminishing into trickles of less than 6% and 8%, what do elderly, artistes or otherwise, do? In the public humiliation of a noted dance exponent, and the insult intended for others in the list, the disservice done to the arts will hurt even more than the silencing of institutions. The irony is that veteran Padma awardee artistes are being evicted by a party that has the lotus as its electoral symbol. Chirag Paswan had a spare MP flat, Guru Mayadhar Raut had just Rs 3,000 in his account.

The writer is Editor, IndiaLegalLive.com and APNlive.com