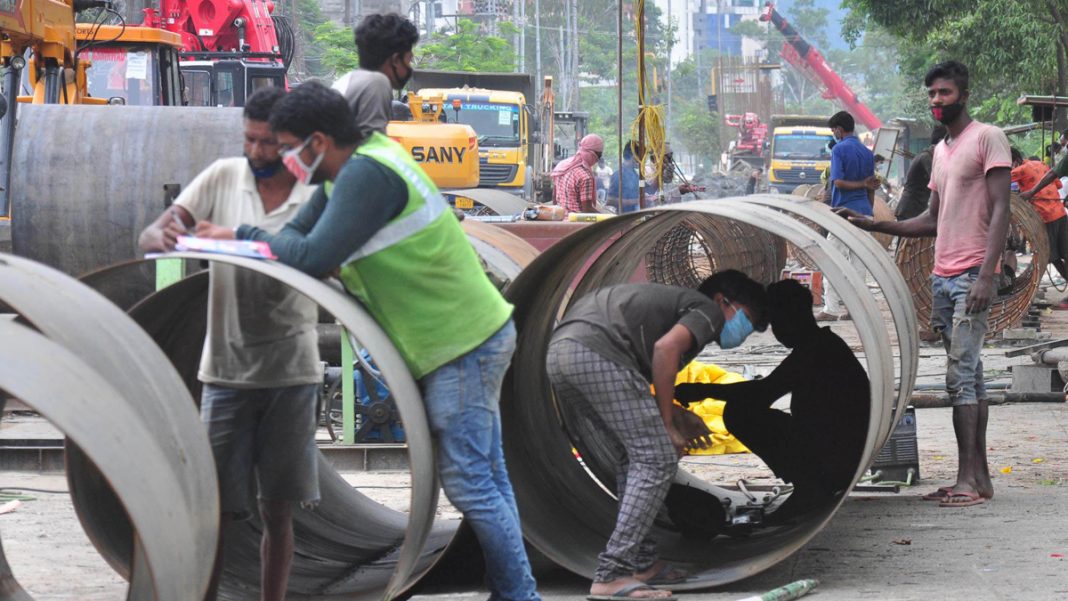 The rural economic distress has pushed approximately 24 million migrants back to their original places of work, but they face huge problems. If they find themselves back in unhygienic and miserable conditions in cities, we will end up perpetuating endless cycles of disease, displacement and poverty.

The outbreak of the pandemic in India and subsequent containment measures such as prolonged lockdowns brought the entire economy to a grinding halt. The fallout has been immense and is likely to have long-lasting impacts, particularly on the lives and livelihoods of marginalised communities and people living in poverty.

By the end of the lockdown phase, according to an ActionAid survey, 78 percent of workers in urban areas and 59 percent of workers in rural areas lost their livelihood. The loss of housing emerged as a major issue during the lockdown, which perhaps precipitated the decision of millions of workers to leave their city workplaces and go back to their home towns and villages, a majority of them in Uttar Pradesh, Bihar, Rajasthan, Maharashtra, and Madhya Pradesh. According to the 2011 census, these are the top five origin states for inter-state migrants and account for nearly 55 percent of the total migrants. In addition to these states, Odisha, Jharkhand and West Bengal have also seen a high outflow of migrants.

The influx of a high number of workers in a short period of time exerted additional strain on the infrastructure and services in rural areas. In the absence of employment opportunities in the non-farm sector, there was an over-reliance on agriculture. With agrarian wages stagnant and farmers struggling with high input costs, low prices and frequent crop losses due to climate-induced uncertainties, absorption of these workers into the agriculture sector was extremely difficult. Similarly, as demand for jobs under the Mahatma Gandhi National Rural Employment Guarantee Scheme (MGNREGS) shot up astronomically, there were concerns about adequate job creation even with higher budget allocation.

According to the Ministry of Rural Development, in the month of May 2020, 46 lakh households were provided work as compared to 1.7 crore in April of 2019, a decline of 76 percent. In fact, this figure is the lowest for May since 2013. A bulk of the employment provided was only in a few states.

Of the 46 lakh households who were provided employment in May, about 57 percent were in only two states Andhra Pradesh and Chhattisgarh. According to the Ministry of Rural Development, 19 out of 34 states reported to have demanded jobs under the Scheme provided work to less than 10,000 households, much lower than the previous year. Some states like Telangana did not record any work at all. Even large states like Uttar Pradesh and Maharashtra provided employment to only 1,86,000 and 1,43,000 households, respectively, by the end of May.

Based on our fieldwork during the lockdown, it is observed that the labour market absorption rate in rural areas was much lower for high-skilled workers. As a result, they were voluntarily unemployment and those workers with fewer skill levels who were absorbed in the rural areas were barely able to survive. Moreover, the addition of male workers in rural areas put tremendous pressure on women workers who were engaged in the farm sector, forcing many to make way for their male counterparts.

The rural economy distress has now pushed migrants back to their destination locations. According to Centre for Monitoring Indian Economy (2020), it is estimated that around 24 million workers have returned to their original places of work. A majority are from Uttar Pradesh, followed by Bihar, West Bengal, Odisha and Madhya Pradesh.

On arrival, all migrant workers need to undertake the mandatory 14-day home quarantine. According to ActionAid (2020), a little over 42 percent of the migrant workers were staying in rented housing, followed by 24 percent in their own semi-pucca houses, and 21 percent in their own kutcha houses. Around six percent said that they were staying in community housing, and less than one percent had been provided housing by their employers. In the same survey, 68 percent of the workers said they had only one toilet in their homes. More than 19 percent said that they were dependent on public or community toilets and six percent reported that they did not have access to any toilet facility.

It is also observed that many employers are asking for Covid-19 test results from workers and the costs of getting these tests done is either borne by the workers or the amount is deducted from their wages. Secondly, the costs of home quarantine have been externalised on to the workers. This has increased the search for jobs in the labour market.

According to ILO (2013), cities rely heavily on migrant workers for their growth and sustenance. Yet, urban spaces have failed spectacularly in providing a quarantine shelter, protection and dignity to migrant workers and other informal sector workers during the unlock phase. A majority of migrant workers who work in the informal economy and are dependent on petty trade and casual labour do not have proper housing (NSSO 2018).

All migrant workers live in slums, jhuggi-jhopdi clusters, informal settlements, or at their worksites. These places are typically overcrowded with no access to clean water or sanitation facilities. It is hardly surprising then that slums, unauthorised colonies and other forms of informal settlements have become hotspots for infections in cities. A mandatory home quarantine/physical distancing is an improbable proposition in these spaces.

They also lack critical health infrastructure in the form of primary health centres and dispensaries.

According to the ActionAid report (2020), almost 60 percent of the migrants said that they had to vacate their housing after the lockdown. There was also an alarming increase in the level of food insecurity and a decline in water consumption. This was partly due to restrictions on movement which is taking place in many cities but is also largely indicative of the lack of food reserves in poor households and their low levels of enrolment and access to welfare schemes, such as the public distribution system.

Migrant workers are particularly susceptible to being left out of the schemes which require proof of residence or linking of multiple documents. As cities gradually open up for business, the return of migrant workers is contingent on greater public investment in improving their living conditions and access to healthcare and other services.

BEYOND THE UNLOCK PHASE

There needs to be an urgent focus on rebuilding the livelihoods of migrant informal workers. These efforts should be centred on creating decent work with dignified minimum wages and ensuring that socially marginalised communities and women workers can access the work created. There is also a need to ensure that marginalised communities have secure access to food, shelter, water and pre-job testing facilities. There must also be an emphasis on improving living conditions or informal workers through social housing and workers’ hostels which can provide them a safe and secure quarantine facility as soon as they arrive in the cities. There is also a need to improve their working conditions by strengthening and implementing labour laws and creating suitable protective mechanisms, including those which enable safe migration and reduce the risk of trafficking and bondage.

Lastly, all migrant workers who have returned to cities must be provided with meaningful social security and affordable and quality public services, including education and healthcare. If this is not done and workers are forced to move due to distress, only to find themselves back in unhygienic and miserable conditions in cities, we would only end up perpetuating cycles of disease, displacement and poverty.

A virtual academic conference hosted by the law college recently to coincide with Constitution Day discussed the future of legal education and the role of law schools. A host of eminent speakers from the legal fraternity addressed the topic and raised some important issues.
Read more
Columns

The chief justice of India’s statement that the SC is keen on discouraging petitioners resorting to Article 32 has drawn criticism as it is one of the basic features of the Constitution. Perhaps he was alluding to the flood of petitions reaching Court when personal liberty is not taken seriously by High Courts.
Read more
Courts

The Supreme Court in a reportable judgement on Wednesday (December 2) set aside the conviction and life sentence awarded by the Uttarakhand High Court to three persons of the same family under Section 304B IPC.
Read more
Allahabad High Court

A single bench of Justice Ajay Bhanot was hearing an Application filed for quashing the case filed against Saad, who, along with a few others, was charged for attempt to murder and spreading infectious disease.
Read more
Columns

The Constitution, through Articles 15 and 16, seeks to crystallise the idea of “complex equality” and the trilogy of Pavitra v Karnataka illustrates this. The apex court has thus emerged as the moral pedagogue of social justice.
Read more
India Legal
Did you find apk for android? You can find new Free Android Games and apps.

A virtual academic conference hosted by the law college recently to coincide with Constitution Day discussed the future of legal education and the role of law schools. A host of eminent speakers from the legal fraternity addressed the topic and raised some important issues.
Read more

The chief justice of India’s statement that the SC is keen on discouraging petitioners resorting to Article 32 has drawn criticism as it is one of the basic features of the Constitution. Perhaps he was alluding to the flood of petitions reaching Court when personal liberty is not taken seriously by High Courts.
Read more

The Supreme Court in a reportable judgement on Wednesday (December 2) set aside the conviction and life sentence awarded by the Uttarakhand High Court to three persons of the same family under Section 304B IPC.
Read more