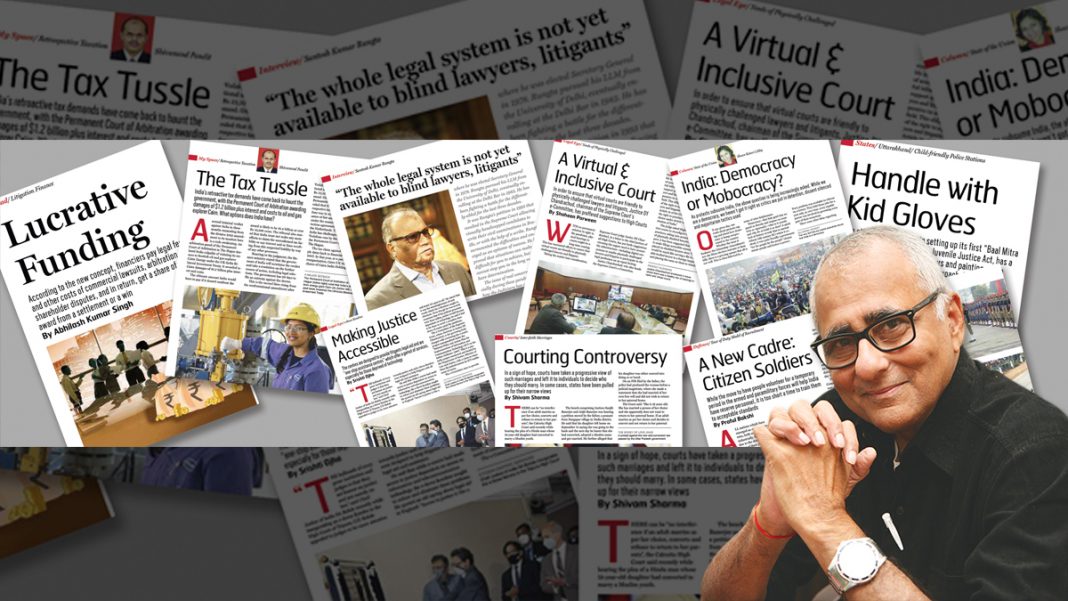 Our first issue of 2021, marking the seventh eventful year of our publication in its current avatar, is laden with a wealth of original, information-packed interviews, analyses and breaking news articles that have become our indelible hallmark, distinguishing India Legal from competitors.

Our editors have chosen wisely in commissioning and creating reports and commentaries that are focussed to best reflect what constitutes the India Legal USP, or DNA if you prefer a more contemporary description.

More effective than spelling out these characteristics is to introduce you directly to some of the more prominent articles that we generated in keeping with our editorial priorities and direction.

Each has its own importance, its very own space under the sun in between the covers of our current issue. But one that stands out is Supreme Court Advocate Abhilash Kumar Singh’s finely researched piece on the importance of organised litigation finance practice in India. Read the related story: Funding lawsuits: For a piece of justice In the last decade, litigation finance has seen substantial growth globally. The Indian market is uniquely lucrative for funders, Singh argues, because the torts of champerty and maintenance—the bringing of vexatious litigation—never had force in India. Consequently, global litigation funders are increasingly looking to fund Indian disputes and parties. In recent years, the Indian market has been hit with a number of frauds and scams that have eroded the investments and deposits of thousands of people. The banking sector alone has witnessed multiple scams.

In a similar vein finance guru Shivanand Pandit analyses the impact of Cairn Energy plc securing major relief from the Permanent Court of Arbitration at The Hague on the Indian government’s retrospective tax demand against the global oil and gas major which was ruled  “inconsistent” with the UK-India bilateral treaty. Read the related article: After Vodafone, Cairn win against retrospective taxation puts India in a corner

On what editors refer to as the “human interest” front, we carry an interview with the exceptionally gifted Senior Advocate SK Rungta on how the judicial system in India is unsuitable for lawyers and litigants with physical disabilities. Rungta himself is visually challenged and has fought for the rights of the blind. This is a unique must-read article:“The whole legal system is not yet available to blind lawyers,litigants”

In addition to this interview, we also report on Supreme Court-related developments that impact this arena. Chief Justice of India (CJI) Sharad Arvind Bobde and Justice DY Chandrachud have been making positive news because of their recent pronouncements. It is the hallmark of every great institution and judges that they are keener on justice and not merely the law, Bobde said at the inaugural ceremony of an e-Sewa Kendra at the Tripura High Court. Read the related article:E-Sewa Kendras: Making justice accessible CJI Bobde said he was “acutely conscious” that the decision to shift judicial processes online would make justice “technology-dependent” but it had to be done to avoid a complete shutdown of courts amid the pandemic. Admitting that e-courts made access to justice dependent on access to information and telecommunication technology, the CJI said e-Sewa Kendras seek to eliminate and alleviate these problems.

With virtual courts here to stay, Justice DY Chandrachud has called upon High Court chief justices to do the needful to make hearings more easily accessible to physically-challenged lawyers and litigants. Read the related article:Making virtual courts inclusive by heeding needs of the physically challenged

In a letter to the CJs, Justice Chandrachud, who also heads the SC’s e-Committee, pointed out that the creation of accessible infrastructure, including digital infrastructure, and an appropriate support system in the judiciary for lawyers and litigants with disabilities, is imperative in order to create a level playing field.

At a time when India’s democracy is under critical scrutiny from within and without, Chennai-based Shaan Katari Libby, a barrister-at-law, Honourable Society of Lincoln’s Inn, UK, and a leading advocate in Chennai, examines the concept of democracies vs so-called mobocracies. Where is the line? Read the related article:India: Democracy or Mobocracy?

And while on the subject of democratic rights, we also cover the “love jihad” controversy through the Calcutta High Court’s recent observation that adults can marry whoever they choose to, and no one can interfere even if they change their religion before marriage. Read the related article:Courts step in to defend inter-faith marriages. While hearing the petition of the father of a 19-year-old woman who claimed that his daughter had been unduly influenced to convert to Islam before marrying a Muslim youth, the court said: “No interference if an adult marries as per her choice, converts and refuses to go to her parents’ house.” In his plea, the 44-year-old petitioner from Durgapur village in Nadia district alleged that his daughter had been lured and brainwashed to change her religion and marry the Muslim youth. The woman left her home on September 15.

This is only a limited selection of fare for reading during the first week of 2021. It will be as rich and as relevant as the year progresses. We make this promise each passing year. And we keep it.