The Endless Struggle: Bhopal Settlement Violated in the Labyrinth of Law 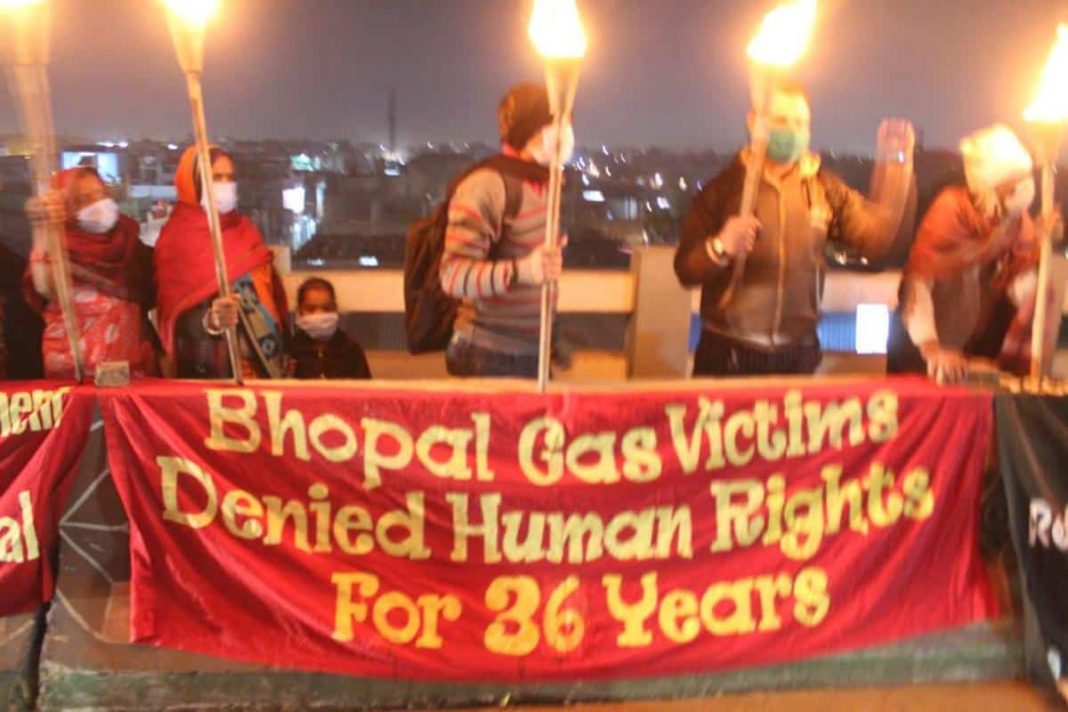 The victims of “the largest peacetime industrial disaster” have not only been deprived of full compensation, but face additional threats and new insecurities. The callous indifference of the bureaucracy and politicians has made matters worse.

December 2-3 marked the 36th Bhopal catastrophe anniversary. But only for valiant survivors and victims of successive Bhopal catastrophes1 , not for Madhya Pradesh or the Union government. And by the time this article is published, India would have again celebrated International Human Rights Day on December 10.

Anniversaries come and go, so do chief ministers and prime ministers, but the plight of the Bhopal survivors remains the same. Theirs is the estate of suffering and struggle, but increasingly, Generation X and beyond have no meaning or use for them. For them, the event occurred a long time ago, before they were born, school and college curricula have no mention of them and the booming, buzzing chaos that is social media has no time or inclination to engage and sustain old struggles. At any rate, moving on means coping with the struggles of the day. They are concerned with new injustices, and recalling old sorrows does not quite help. Let the bygones perish because they already have; what matters is the near and median future.

While there is much going for this kind of presentism, there is also much to be learned from the immediate and distant past. Society is doomed to oblivion when it obliterates from human memory the injustices of the recent past. In fact, injustices at least defined as evils that could have been avoided or ameliorated can never be past; they need to be tackled in the present and future. Not in vain did Czech novelist Milan Kundera declare that the struggle of men (and I add women) for justice is the struggle of memory over forgetfulness. And following Kundera, as I said at the first anniversary of the Bhopal catastrophe, contrary to the public adage public memory is not short; the truth is that it is made short by forces of domination and imperialism.

The struggle for human rights is to combat organised oblivion. Just one contemporary example should suffice. The American House of Representatives has just passed a “veto proof” $741million bipartisan defence bill that contains new benefits for tens of thousands of Vietnam war veterans and their kith and kin exposed to Agent Orange Dioxin and other hazardous chemicals during the Vietnam War (1961-1971). This powerful herbicide sought to eliminate forest cover and crops for North Vietnamese and Viet Cong troops. More than 20 million gallons of various herbicides were poured over Vietnam, Cambodia and Laos from 1961 to 1971. Agent Orange was proved later to cause serious health issues—cancer, birth defects, rashes and severe psychological and neurological problems—both for the Vietnamese people and returning US servicemen and their families.

The American federal judiciary at least was very active in empowering the American victims of Agent Orange to earn a settlement to the tune of $180 million (or amounting to $240 million were we to take account of the veterans who were infected in submarines).

Our record was also good in the initial phase. Parliament enacted a Bhopal Act that allowed the Indian State to act as a sovereign plaintiff to sue Union Carbide Corporation in New York for $3 billion for violating and for restoration of environmental harm. The long-drawn litigation was settled by the Supreme Court for $470 million. The settlement proceedings strangely excluded the parties representing the violated (in what I have named as the Second Bhopal Catastrophe). The review petition declined to touch the amount, but cancelled the criminal immunity acceded to the Corporation and affiliates. Further orders and directions followed for medical and other reliefs from the Supreme Court, and the National Human Rights Commission (NHRC) to whom the Bhopal matters stand transferred.

But the Bhopal-violated always faced additional threats and new insecurities. These have taken various forms. The most egregious example comes during the present Covid-19 pandemic. We do not know how many people were affected by the methyl isocyanate (MIC) that leaked from the plant, but according to Rachna Dhingra of NGO Bhopal Group for Information and Action (BGIA), out of 450 Covid-19 victims as many as “254 were found to be Bhopal gas tragedy survivors”, though State authorities had placed their number at 102. Why this sad difference, excepting that it even in these days, the state bureaucratic and political discourse that minimises the saga of suffering peoples. But this minimisation has not ameliorated actual Bhopal casualties and prevented human and social suffering.

As if being a survivor of various diseases and disabilities were not bad enough, the Bhopal-violated have been subjected to various arbitrary actions for which they had to take recourse to worrisome dilatory judicial process. A litigation concerning corruption and related matters is still being dealt with by the Madhya Pradesh High Court for nearly two decades; and the learned Justices have been constrained to report “times without number” the non-appearance of senior officials, as if it was their duty avowed to the general public not to obey the Court’s directions! The full story needs to be told, but here a bare outline of very recent developments will have to suffice.

Why did the government of Madhya Pradesh decide (on March 23, 2020) to convert the Bhopal Memorial Hospital & Research Centre (BMHRC) into an exclusive Covid-19 hospital, thus ousting the MIC-affected people from a site that was earmarked exclusively for their continuing and long-term care? Everyone knows that BMHRC was a facility established by the Union government in pursuance of a Supreme Court directive. Why did it become necessary for the Bhopal Gas Pedeet Mahila Udoyg Sanghtan and the Bhopal Gas Pedeet Sangarsh Sahayog Samiti to take recourse to the Supreme Court, which (on April 7) directed them to take the matter up in the High Court when a matter of right and liberty of citizens was involved? And what wise counsel then made the state to yield, as it did (on April 15, 2020) by withdrawing the earlier order, restoring the hospital for the exclusive treatment of the MIC-affected populace?2  Surely, the exclusivity of BMHRC established solely for the Bhopal-violated was not inconsistent with the right to health of Covid-19 patients, or epidemiological suspects, by other medical sites?

Equally curious is the situation of helpless widowed survivors of the catastrophe. The NHRC has played a catalytic role here. As it notes in its communication of December 3, 2020, both to the Secretary, Ministry of Law and Justice and chief secretary, Madhya Pradesh, the Union cabinet had decided (on June 24, 2010) to provide pension to 5,000 widows of gas victims. Initially, Rs 500 per month, this was increased to Rs 1000 and an amount of Rs 30 crore was allocated. A total amount of Rs 25.43 crore was thus disbursed to the benefit of 4,995 beneficiaries till 2019-20; but now the “hapless widow” beneficiaries are being deprived of the pension. The NHRC has further noted that Rs 204.56 crore (75 percent) was the share of the central government, with the remaining 25 percent to be funded by Madhya Pradesh.

In 2016, the government of Madhya Pradesh sent a proposal for continuation of the pension plan to widows of Bhopal gas victims under the social rehabilitation programme for another five years. Yet, till now, no concrete action has followed. The NHRC has warned that coercive action will have to be taken if no report is filed within four weeks.

The question that arises is why such a direction had to be issued in the first place and why pension would not flow on humanitarian reasons, given the history of Carbide callousness and the corpus of settlement? Where, indeed, have all the monies of the Bhopal settlement ordered by the Supreme Court gone? And does the Union of India, which sued a mighty multinational as sovereign plaintiff and acted as parenspatriae in settling the matter for about one-third the amount ($3billion), owe any residual and continued intergenerational duties not to revictimise the Indian co-citizens thus infinitely harmed?

It is not a matter of surprise at all that the NHRC has no word to say on the delay as far as the issue of Curative Petition (Civil) Nos. 345-347 of 2010, which is currently pending before the Supreme Court for enhancement of compensation and for remediation of the contaminated site in and around the UCIL plant at Bhopal. Perhaps, institutional comity requires that no directions may be given to the highest court in the land. But it was in Justice HL Dattu’s time (as chief justice) that this momentous invention of the device of a bench for social justice was created. And Justices even met on a weekend to hear the Bhopal curative petition. Why then is there subsequent judicial soft-pedalling of this and a different, but related, Union of India petition?

Surely, Justice Dattu, now the NHRC Chair, owes some duty to remind his erstwhile brethren to continue with these labours on so momentous a catastrophe as Bhopal that moved Judge Keenan (trying the suit in New York) to call it “the largest peacetime industrial disaster” in recorded human history?

—The author is an internationally renowned law scholar,
an acclaimed teacher and a well-known writer

2 See Hamida Bi and ND Jayaprakash, Statement on the 36th Anniversary of The Bhopal Gas Leak Disaster, 03.12.2020. This very naming as ‘gas leak’ minimises the scale and depth of intense suffering caused by an entirely avoidable  industrial catastrophe.