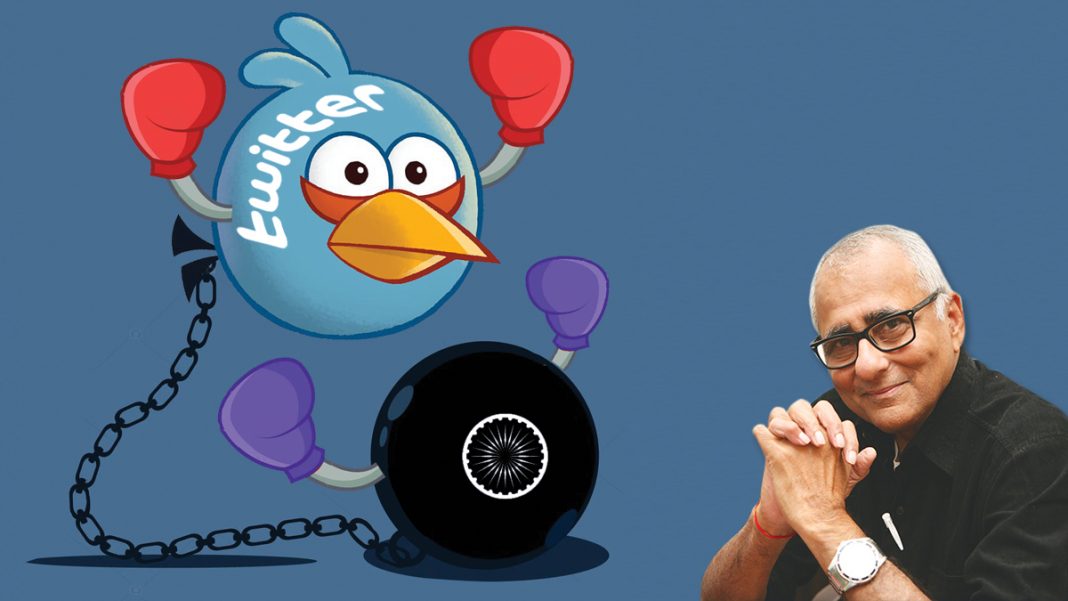 The social media giant finds itself in a quandary over tweets by celebs supporting the nation’s burgeoning farmers’ protests. With the centre asking it to block 1,178 accounts and Twitter not complying, a legal battle looms ahead.

“There is a virtual war being unleashed over Twitter,” writes Vijayashankar ever since, on February 4, the government sent it a list of 1,178 accounts that it wants removed or blocked. The centre alleged that these accounts were being run from Pakistan and were tweeting about the farmers’ protests. It said that if the executives of Twitter failed to do this, they could face imprisonment up to seven years. Soon after, a Washington Post editorial described the Indian government as a “dictatorial” regime like Myanmar. This was followed by pop megastar Rihanna and green activist Greta Thunberg tweeting support for the farmers’ agitation. All this took Twitter propaganda to the level of an “Information War”.

Twitter also decided to suspend the pejorative tweets of pro-BJP firebrand actress Kangana Ranaut. It is now challenging the government and indicated that it has a legal right to overrule the Indian law.

Sounds familiar? Similar battles are shaping up all over the world following the social media giant silencing the accounts of the world’s most powerful former leader—Donald Trump.

Is the ball now in the court of the governments? Will they surrender to Twitter or assert their rights to establish their authority? And what is the legal status of Twitter in the context of the current controversy?

And herein lies a larger tale that goes beyond the social media. It is the story about the role of the media, both social and conventional, the government, advertisers, and owners. The distinction between these entities has become so blurred, so inextricably interwoven, that one does not know any longer (to mix a metaphor) where the State ends and the Church begins.

This is a mega issue. The Twitter controversy is only one of its many facets. In fact, the social media fits in into this puzzle through both angles—on the one hand, it is a powerful missile to perpetrate hatred, despotic rule, disinformation and vitriol while on the other, it may be the only effective anti-missile weapon to destroy these projectiles in mid-air.

And social media has swollen with power and importance in direct proportion to the loss of the credibility and verisimilitude of the conventional media.

Perhaps the remedy lies in starting with massive reforms of the conventional media which has completely yielded its space to the social media through its own sins of omission and commission.

In India, in view of the utter bankruptcy and corruption of the mass media as the Arnab Goswami tapes have effectively demonstrated, there is a compelling need to  jettison the current system of media monitoring, regulations and self-regulation.

The existing buddy-buddy system needs to be junked and replaced with an institutional body under the aegis of the Judiciary which will oversee the role of market promotion, regulator, watchdog and ombudsman.

The current system has degenerated into a cabal of corruption in which the barons-associations-ministries-regulators-market reach agencies are all to blame. The raging controversy shows that private players (in which all major networks may be complicit) and the rating agencies like the former TAMS and BARC, along with regulators like TRAI, are part of the news and market manipulation game. And private self-regulating bodies like NBA can no longer play the holier-than-thou-game because the broadcasters and media outlets associated with it are part of the same incestuous crowd.

This is a serious blow to Indian democracy because it has completely wrecked the Fourth Estate and its viability and independence as a vital prop to the Rule of Law and the Republic.

The Judiciary—which, despite the assaults its image has weathered in recent years, remains the only credible, independent institution in protecting constitutional morality, freedom of speech and responsible journalism—may have to step in to try and stem the rot.

In India, there have been educational reforms, economic reforms, agricultural reforms, labour reforms, railways reforms. But the media—with the social media becoming a parallel universe—with its business practices and operations has remained impervious or immune to reforms even though it is the Fourth Pillar of democracy.

We need not the usual gaggle of made-for-TV thoughters mouthing shibboleths to shoulder this initiative, but out-of-the-box, outspoken, uncompromising champions of the Constitution.