154,225FansLike
654,155FollowersFollow
0SubscribersSubscribe
Home Commerce GST on Lottery: No Jackpot for Anyone 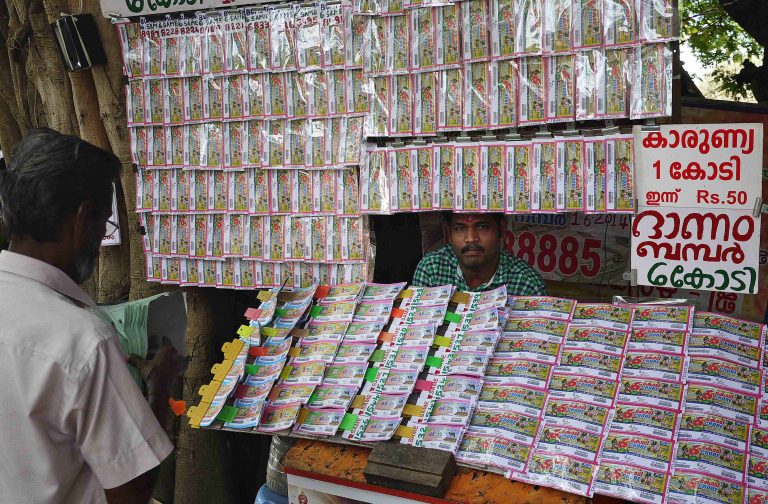 Negotiations on GST rates for lottery tickets have got stuck as Kerala, which earns a huge amount from its sales, does not want to raise taxes from the present 12 percent

While GST rates for property have been settled, those for lottery have reached a stumbling block. The 33rd meeting of the GST Council on February 24 could not come to a decision regarding a change in the GST rate structure for lottery tickets. The matter was referred again to the Group of Ministers (GoM) led by Maharashtra Finance Minister Sudhir Mungantivar which has Kerala, Punjab, West Bengal and Goa as members.

In fact, bringing lottery within the ambit of GST was a Herculean task. It required a series of negotiations between the centre and the states to get it into GST. In the pre-GST days, the centre had no taxing authority on lottery and hence, the states had exclusive authority over taxing it. Some were state-run lotteries, while some were by agents authorised by state governments. Prominent among them were Kerala, Punjab, West Bengal, Maharashtra and Sikkim. When the negotiations for inclusion of different goods and services within GST started, these states, particularly Kerala, were against bringing lottery under GST.

Effective implementation will depend on clear-cut guidelines and effective enforcement against tax evaders. Because of denial of credit, builders will not be required to keep detailed records; this may reintroduce the prevalence of cash transactions. There is a proposal to make it mandatory for the builder to purchase a minimum of 80 percent of inputs from registered dealers, thus ensuring purchase of tax-paid inputs. This is necessary, but would bring in complications. Then, there is a need for detailed transition rules relating to switching over to the new tax rate regime from April 1, 2019. All these things would need to be finalised before March 15 when the Council meets next.

In Kerala, taxing lottery has political overtones. Lottery is very popular among the lower strata who form a major vote bank there. Therefore, no party wants to displease them. Kerala had banned the entry of private operators from other states, but when judicial pronouncements went against such bans, it tackled the issue through a taxation policy that made it unprofitable for private operators to enter this market.

Against this background, when GST talks reached the final stage, the centre brought Kerala around by offering it a unique taxation policy of differentiation in GST rates. For lotteries operated by agents authorised by the state, the tax rate would be 28 percent, but for state-run lotteries, it would be 12 percent. Due to this tariff wall, agents did not find it profitable to operate in Kerala. Thus, Kerala succeeded in keeping the lottery business exclusively for its own people.

As for the present controversy of re-fixing the GST rate structure, some states such as Assam, Maharashtra and Goa demanded a single GST rate for state-run lotteries and state authorised private ones. Private lottery groups too started lobbying for a single rate. This would, naturally, affect Kerala as it would facilitate the entry of lottery agents from outside, and break the monopoly of state-run lotteries. Further, if there was a higher GST rate of 18 percent or 28 percent, the tax burden on lottery tickets would increase, angering the common man and leading to a political fallout.

In the meetings of the GoM, no consensus could be achieved from the beginning as three members, led by Kerala Finance Minister TM Thomas Isaac, opposed the change in the current GST rate structure. While discussing the increase in GST revenue from lottery, he had said during the state budget presentation: “We have been able to attain this in lottery sale by strictly defending undesirable trends and preventing the entry of other states’ lotteries. The state government has taken a stand to impose GST at a higher rate on lotteries being conducted by middlemen.”

Despite the fact that the finance ministers of Kerala and Punjab could not attend the last GoM meeting before the scheduled Council meeting, the GoM had recommended rate parity. However, before the Council meeting, Isaac posted this on his social media page: “Kerala will fight tooth and nail against any move to change the current lottery system. We are sure that other opposition states will be with us. A fair share of BJP-ruled states, which do not have lottery, will not have any interest on the recommendation. Hence, we can resist this in the next meeting.” He further stated that he was expecting at least 11 states to support Kerala’s stand, and hoped there would be consensus. The alternative, he said, should be for the Council to hold voting on the issue. Arun Jaitley, Union finance minister and chairman of the GST Council, who has got all Council decisions passed through consensus till now, was wary of voting.

Therefore, when no consensus could be achieved in the last Council meeting, he referred the matter back again to the GoM for further deliberations and to come back to the next Council meeting on March 15. He thus ensured that the spirit of cooperative federalism displayed in GST implementation was not sullied by the lottery issue.

The change of rate structure on lottery does not seem possible with elections just a couple of months away. That would, indeed, be a sound decision.

—The author is former Chairman, CBEC and author of the book, “GST Explained for Common Man”