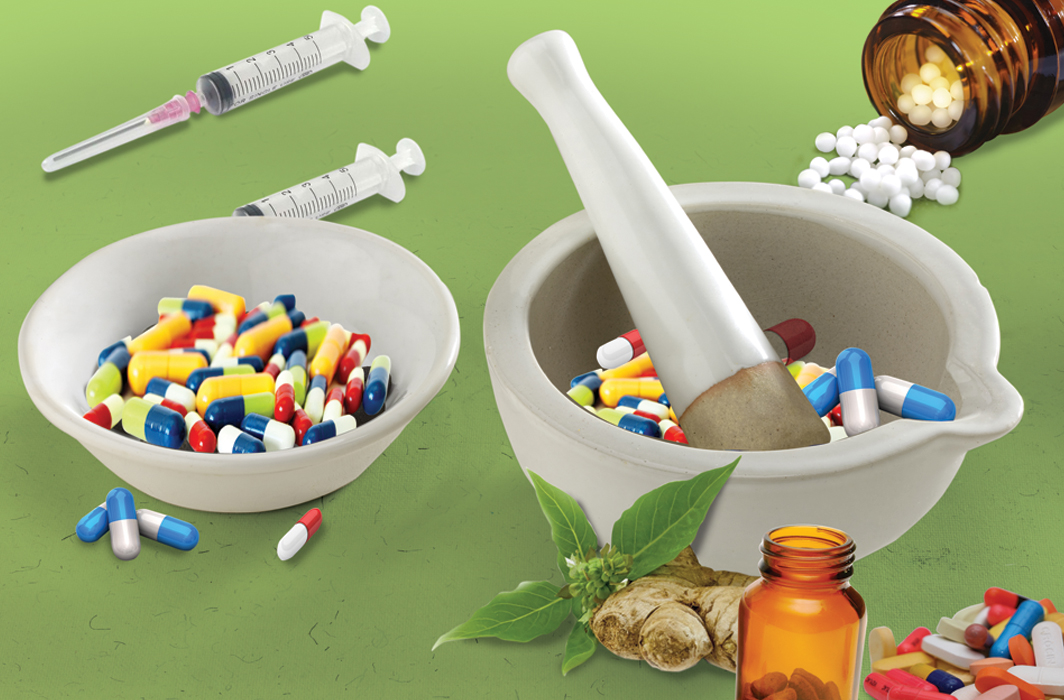 Two bills passed by the state assembly have made it possible for Ayush doctors to substitute their allopathic counterparts in primary health centres. But is this practical?

The Shivraj Singh Chouhan government has stirred a hornet’s nest among the medical community in Madhya Pradesh with the passage of two bills in the recently concluded winter session of the assembly. The two bills—Madhya Pradesh Ayurvigyan Parishad (Sanshodhan) Vidheyak 2016 and MP Ayurvedic, Unani Tatha Prakritik Chikitsa Vyavsai (Sanshodhan) Vidheyak 2016—have legally enabled Ayush doctors to undertake the same job that their MBBS counterparts do in primary health centres. The bills were brought in not only to comply with a Supreme Court directive in this regard, but to fulfill recommendations of a group of secretaries formed by Prime Minister Narendra Modi early this year.

In 1987, in Dr Mukhtiyar Chand vs State of Punjab, the Supreme Court held that the “practice of modern system of medicine by Indian system of medicine (ISM) qualified professionals is possible provided such professionals are enrolled in the state medical register for practitioners of modern medicine maintained by the State Medical Council. The respective state government can notify and give recognition to qualifications eligible for registration in the state medical register”.

In the light of the Court ruling, the Ayush department of the Union Health Ministry asked state governments in May 2013 to consider amending their respective state laws. This was needed in order to override Section 15 of the Indian Medical Council Act, 1956, which states that no person other than a medical practitioner enrolled on a State Medical Register shall practice medicine in any state. Any person who acts in contravention of this shall be punished with imprisonment of one year or a fine of Rs 1,000 or both.

Under the two bills, MP’s Ayurvedic and Unani doctors can practice allopathy after three months of training. This includes modules such as prescription of antibiotics and procedures of modern medicine and treatment, including delivery. As per the guidelines of the Medical Council of India, an MBBS degree is required to practice allopathy. 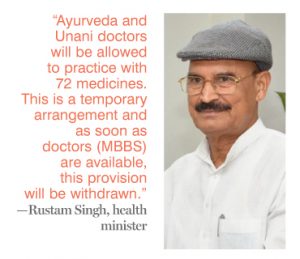 This move by the state government has affected over 700 Ayush (Ayurveda, Yoga, Unani, Siddha, Homoeopathy) doctors who have been deployed in 500 rural health centres. The state government started recruiting them from July to cope with the acute shortage of MBBS doctors in rural areas. This means that an Ayush doctor can be entrusted an MBBS practitioner’s job if the concerned state government through legislation gets him enrolled as a member of the Medical Council of India.

This idea is being encouraged by the Modi government. A group of secretaries formed under the banner, “Education and Health—Universal Access and Quality”—had in January 2016 backed the idea in a presentation made before the PM. The group had proposed a “bridge course for Ayush practitioners for primary healthcare” and gave an ambitious timeline—churning out three lakh such practitioners in three years. The health ministry has worked out an MoU for a bridge course with IGNOU to allow Ayush practitioners as well as nurses to operate at the primary health level.

However, this idea has not been well-received. The Indian Medical Association (IMA) is strongly opposed to allowing Ayush doctors into the modern medical system. Dr A Marthanda Pillai, president of IMA, said his organisation was exploring all options on this issue. “We are strongly opposed to it and have shared our views with the health minister. We are very clear that modern medicine cannot be practiced by Ayush practitioners.” 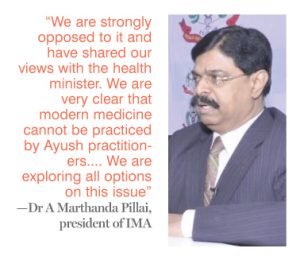 Associations of allopathic doctors in MP too said that handing over primary health centres to less qualified doctors would do more harm than good in rural areas. They said it was ridiculous to assume that three month’s training could be a substitute to seven years of study in medical colleges. The secretary of the Madhya Pradesh Medical Teachers’ Association, Jeevan Meena, said the government’s decision amounted to handing over rural health service to quacks. “What else would you call someone who is considered eligible to prescribe allopathic medicines after just three months training?” he asked.

The Madhya Pradesh Medical Officers’ Association said that while it cannot be denied that the state was facing an acute shortage of doctors, the government’s solution to the problem was impractical and inadequate. State IMA president Pradeep Singh Chandel said that Ayush doctors were ill-equipped to provide treatment through modern medicines. The former president of IMA’s state chapter, Dr HP Singh, said that opening more medical colleges was the only way out of this problem.

One of the reasons for the shortfall of doctors in MP is the Vyapam scam with regard to medical college admissions. After the scam was exposed in July 2013, the state government cancelled admissions of over 1,000 medical students who were admitted in colleges between 2008 and 2013.

Presently, Madhya Pradesh has 16 medical colleges, including six government ones. The colleges together produce 1,600 MBBS graduates every year. Four more medical colleges have been sanctioned.

However, Dr VD Tembhurnikar, secretary general of the National Integrated Medical Association that represents graduates from Indian systems of medicines, said this opposition would only deprive needy people of medical assistance.

One of the reasons for the shortfall of doctors in MP is the Vyapam scam with regard to medical college admissions. After the scam was blown off in July 2013, the state government cancelled admissions of over 1,000 medical students who were admitted in colleges between 2008 and 2013. Many more admissions are facing the threat of disqualification as a CBI probe into Vyapam cases is underway. Bala Bachchan, acting leader of the opposition, said: “The effect of the Vyapam scam is clear in the government’s decision to recruit Ayush doctors.” Another reason for the paucity of doctors is that MBBS practionioners are averse to doing duty in rural areas despite several incentives being offered to do so. 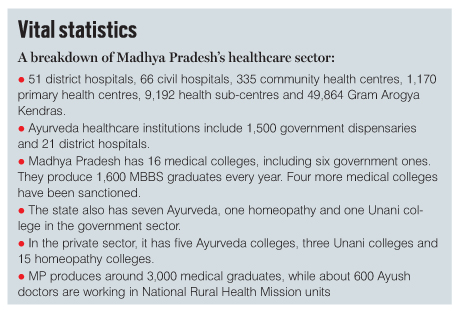 MP Medical Officers Association patron Dr Lalit Srivastava said poor pay scales and lack of residential facilities were sore points. “Doctors working in other states or in private hospitals are offered better salary than those in the Madhya Pradesh government. Why should any young doctor work under the state’s health department?” he asked. The government, he claimed, managed to retain only 20-30 percent of the doctors it recruited annually.

While health minister Rustam Singh acknowledged the objections and apprehensions of allopathic doctors in the assembly, he said that the arrangement of substituting Ayush doctors for MBBS graduates was not permanent. “Ayurveda and Unani doctors will be allowed to practice with 72 medicines. This is a temporary arrangement and as soon as doctors (MBBS) are available, this provision will be withdrawn,” he assured.  He said that other states such as Maharashtra and Gujarat too were following this practice.

The minister said at a recent function: “There is severe shortage of doctors in Madhya Pradesh, especially in government hospitals. Specialists are just not available at all.” He expressed “sympathy with the patients”.

Doctors working in other states or in private hospitals are offered better salary than those in the Madhya Pradesh government. Why should any young doctor work under the state’s health department?

According to the Medical Officers Association, Madhya Pradesh should ideally have around 15,000 government doctors. But the actual strength was one-fifth, ie, around 3,000. The number of sanctioned posts of MBBS and postgraduate doctors, including specialists, in the health department was 7,000. However, the state is short of 4,000 doctors. Fifty-five percent of health centres in rural areas are without MBBS doctors. The total shortage of doctors is over 60 percent.

Given this dismal scenario, it will be a Herculean task to for the government to improve healthcare at the grassroots.