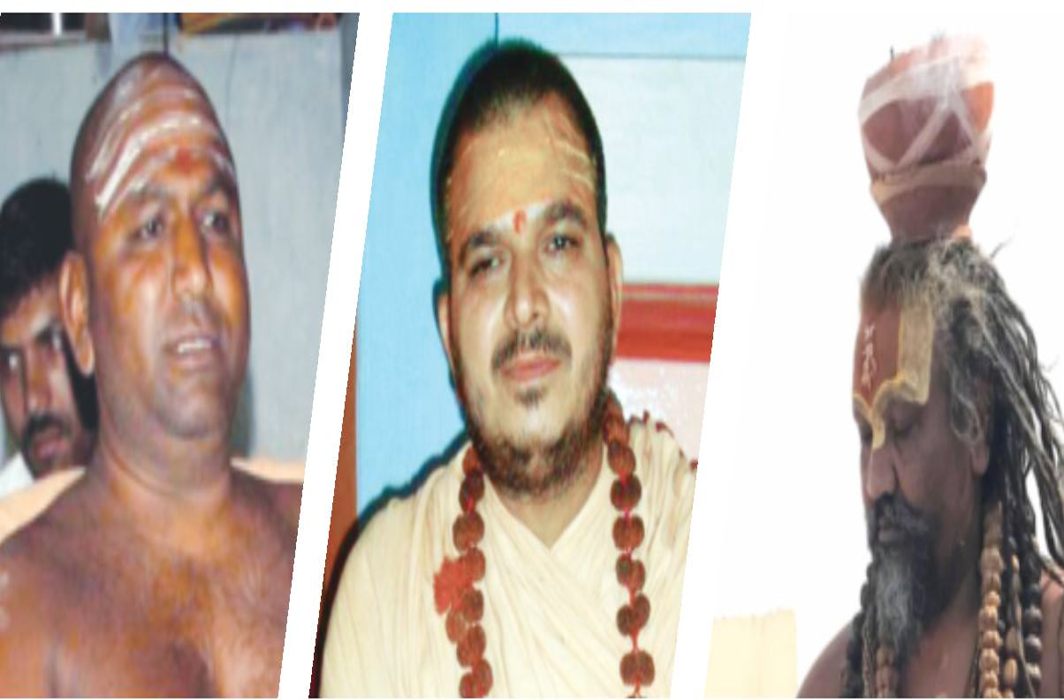 A controversial move by the Madhya Pradesh chief minister, Shivraj Singh Chouhan, to make sadhu babas ministers of state has been challenged in the High Court

However, on April 9, the Indore bench of the MP High Court comprising Justices PK Jaiswal and SK Awasthi issued a notice to the state government in response to a PIL challenging the ministerial status for the babas. The PIL was filed on April 4 by one Ram Bahadur Verma through his advocate, Gautam Gupta. The Court has asked the go­vernment to file its reply in three weeks.

Questioning the constitutional validity of the ministerial status of the babas, the petitioner claimed that the expenditure on facilities provided to the five MoS would ultimately have to be borne by taxpayers. The petition mentioned that the state government is already groaning under a Rs 1.75-crore lakh debt. Allowances and other perks to the five MoS would add to this burden, it added.

Besides, the petitioner said, the state government has not clarified on what grounds the five religious men were chosen for ministerial status. “Only a few days before being accorded the status, some of them had threatened to launch a stir against alleged corruption in the tree plantation undertaken by the state government on concluding the Narmada Sewa Yatra last year,” the petition said.

Madhya Pradesh has 31 ministers and in addition, 93 have been accorded ministerial status. Of them, 35 enjoy cabinet and 58, MoS rank. In the last three months alone, 11 people have got ministerial status. The entitlements of an MoS are many—a luxury vehicle with free pe­trol/diesel for 1,000 km every month; Rs 15,000 monthly rent; Rs 3,000 hospitality allowance and Rs 13,500 as honorarium. They can also keep an office staff and a personal assistant at government cost.

MoS status to those not elected, including religious figures, is not uncommon in MP. The chairman of the executive council of the state cow conservation board, Mahamandleshwar Swami Akhileshwaranand Giri, enjoys this status as did the vice-chairman, Swami Ganeshanand, whose term ended recently. In defence of according ministerial status to such a large number of people, Chouhan said he did so with the objective of associating all sections of society with works of public welfare. 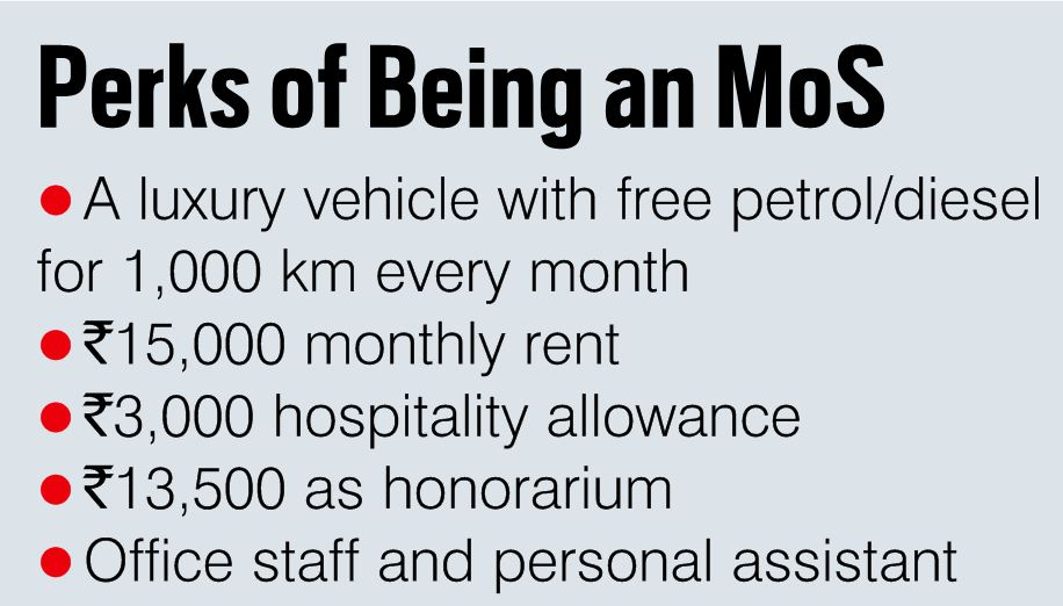 The tradition of doling out largesse in the form of ministerial status to those considered useful to the chief minister began in 1980. Then Chief Minister Arjun Singh’s cabinet had 42 ministers, while around 50 had ministerial rank. Successive MP CMs not only carried on this tradition, but added sinecures to appease supporters. The practice has come to be acknowledged as the chief minister’s absolute prerogative which need not be questioned.

It all began on March 28 when an assembly of sants in Indore decided to take out a Narmada Ghotala Yatra on the banks of the river under the leadership of the self-styled Computer Baba. Its organiser was Pandit Yogendra Mahant. The meeting decided to expose alleged corruption of the government during the 145-day-long state government-sponsored Narmada Sewa Yatra that concluded on May 15 last year. The main focus of the proposed stir was to expose the “hollow claim” of the state government that it made a world record by planting 6.67 crore saplings on July 2 last year.

On March 31, the chief minister summoned the two main organisers of the proposed stir and announced that he would appoint them as members of a committee to create awareness about river conservation. On April 3, an official order was issued by the general administrative department that along with Computer Baba and Yogendra Mahant, three more religious figures had been nominated in the committee and accorded MoS status. Soon after, Computer Baba and Yogendra Mahant cancelled their proposed campaign against the alleged “scam” in the state government’s Narmada programme.

The alleged deal between the babas and the CM kicked off a huge controversy. Social media trolled Chouhan as well as the five babas. National media pilloried the babas as they changed tune and started singing paeans to the chief minister. The Congress dubbed the decision an attempt by the BJP to exploit the religious sentiments of the people for political gain. State Congress spokesperson Pankaj Chaturvedi told India Legal: “This is an effort by the chief minister to wash off his sins. He ignored conservation of the Narmada. These sants should inspect where the state government has planted six crore saplings (along the river banks) as claimed by the CM.”

Denying the babas’ allegation of bungling in the plantation drive, Chouhan claims that 90 percent of the saplings are safe. “The plantation drive was hugely successful and all the saplings will grow under protection of the government machinery,” Chouhan said while reviewing the progress of the campaign on April 9. State BJP spokesperson Rajnish Agrawal says: “Saints and seers were accorded the MoS status to make their work of environment and river conservation easier.” However, disgruntled leaders within the BJP obliquely flayed the chief minister and the new ministers.

BJP veteran and former chief minister Babulal Gaur slammed the sants who took the coveted posts instead of exposing corruption. “It seems to be the eighth wonder of the world that the sants neither applied for party membership nor contested any election but bagged minister of state status,” he reportedly said. Former BJP veteran and Rajya Sabha member Raghunandan Sharma said in a press release that the government should not have struck such a deal with the sants. “This would please a few but make the entire sant community unhappy and against the party.”

And sure enough, a section of sadhus raised objections to the ministerial status given to the babas. The All India Akhada Council, the supreme body of sadhus, has said such blatant appeasement of sants had lowered the dignity of the entire sadhu community. The Council’s president, Narendra Giri, said he would write a letter to the head of the Digambar Akhada to which three of the five MoS belong, asking for action against them. Reports also appeared in the local media that the RSS state leadership was unhappy over the manner in which the MoS status was accorded to the babas.

After they were given the posts, Pt Yogendra Mahant (55) and Swami Namdev (Computer Baba, 53), told various media outlets that the government was doing a lot to preserve the Narmada and that they would work with the state administration. Computer Baba said: “We are sadhus and don’t need any status but a warrior needs certain resources to fight in a war. Hence, the facilities we get as MoS will help us.” Computer Baba is based in Indore. He says he got the moniker because of the speed at which he works. He is also known as “helicopter baba’’ because he occasionally travels in choppers rented by devotees.

Pt Yogendra Mahant, who was supposed to be the organiser of the campaign against the MP government’s “ghotala”, also defended his U-turn, saying there was no scope for the yatra as the CM had addressed all concerns. He said the ministerial status was needed because the job would require him to be on the road. He, too, is In­dore-based and runs an NGO for physically challenged persons. He is the national president of a Vishwa Brahmin Samaj.

The third baba, Bhaiyyu Maharaj, 49, was a former model and worked as a marketing executive. His original name was Uday Singh Deshmukh. The Indore resident runs an ashram under the banner of an NGO. He came into the limelight in 2011 when he was believed to be a mediator between Anna Hazare, who was on hunger strike in Delhi and demanding the setting up of a Lokpal, and the government. He is a favourite among politicians of Maharashtra who often call on him for advice. He, however, has declined to accept the facilities that come with the MoS status.

Talk about religion mixing with politics.