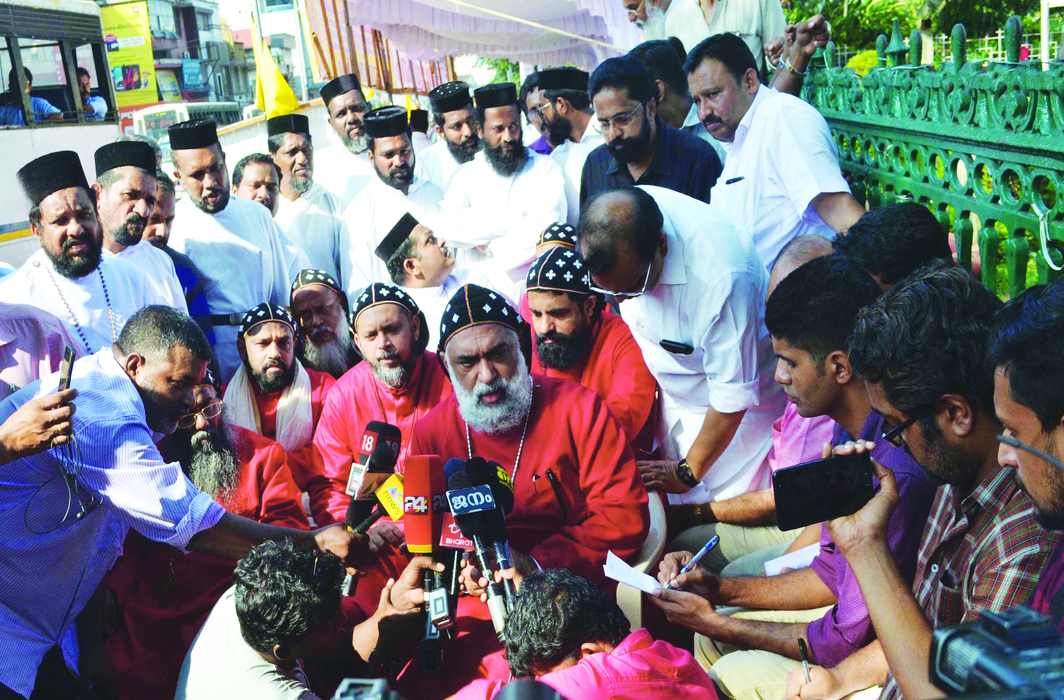 To ensure a decent burial for Jacobites whose churches were taken over by the Orthodox faction under an apex court order, the Kerala government has brought in an ordinance to douse the flames

There is no doubt that even if one is denied a dignified life, a decent burial/cremation should be accorded to everyone. But in Kerala, the Jacobite faction under the Malankara Church has been denied this right for quite some time following a feud with the Orthodox factions based on power grab. Disturbed over the ugly fights taking place even in front of bereaved families when they bring the bodies of their dear ones for burial in the parish cemetery, the state government has approved an ordinance which will ensure that every faithful gets a burial in his home parish.

Sadly, the warring factions would more often seize burial time as an opportunity to settle scores with their opponents. The state cabinet has ratified the ordinance and sent it to the governor for consent.

There have been several instances of funerals of ordinary people, including of women who died in their late nineties, turning into battlegrounds as the Orthodox faction opposed the burial of Jacobites in parish cemeteries under their control. In some cases, families kept the bodies in mobile mortuaries for several weeks as they waited for the judiciary or the police to intervene.

However, in many cases, the Orthodox Church had agreed to the burial of Jacobites in the parish cemetery but opposed Jacobite priests performing the funeral rites there. This was objected to by the Jacobites who wanted their own priests to perform the rituals.

The tussle between the factions has even spilled into the streets and church premises following a dispute over ownership of parishes and their properties, including cemeteries. Finally, the Orthodox Church approached the Supreme Court, which on July 3, 2017, ruled that all churches under the Malankara Church would be governed as per the Church constitution of 1934. Accordingly, over 1,100 churches under dispute came under the control of the Orthodox Church.

The Court order was implemented with police swinging into action in some parishes. A majority of the churches under dispute are still with the Jacobite Church, which is enjoying tacit support from the LDF government. However, the present issue of denial of burial came up after the Orthodox faction refused to allow Jacobites to use their family vaults in cemeteries under control of the Orthodox faction. 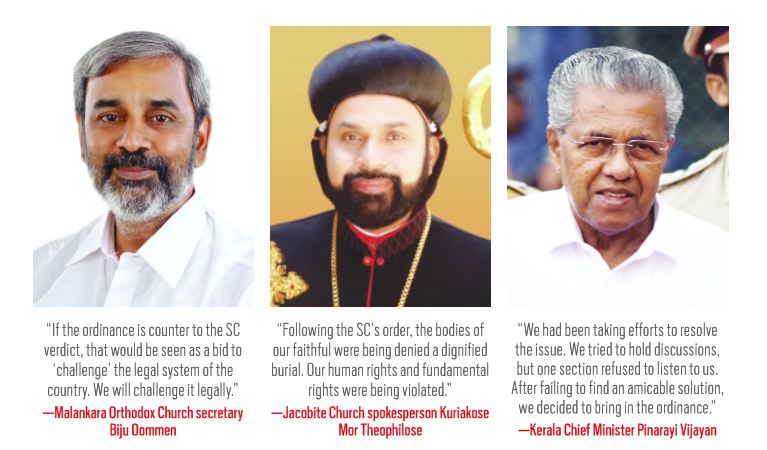 Despite the best efforts of the government to make both factions come to a common platform and agree at least on the issue of burial, they have refused to budge. It has now become a social issue not only for Christians but for people of other religions who live adjacent to the former’s parishes.

Chief Minister Pinarayi Vijayan said the state government had intervened as the delay in burials had become a social issue affecting the entire Christian community. “The Jacobites can conduct funeral rites as per their belief outside the parish and cemetery. They will have the right only for burial at the family vault or other graves in the same cemetery. The ordinance also suggests a penal provision of imprisonment up to one year and a fine of Rs 10,000 for obstructing the burial,” he said during the post-cabinet briefing.

“We had been taking all efforts to resolve the issue. Though we tried to hold discussions, one section refused to listen to us. Even the governor had stepped in to resolve the vexed issue. But after failing to find an amicable solution, the government decided to bring in the ordinance,” he added.

The cabinet had appointed a sub-committee to look into the issue and solve it amicably. The Orthodox faction, which had expressed lack of trust in the government’s stand, did not cooperate with the committee’s efforts and did not even bother to hold talks with a delegation of heads of other churches who came forward to resolve the issue. It said that the apex court had decided in its favour and the government was trying to scuttle the process of dispensation of justice. Incidentally, initial attempts at mediation before the court case was filed failed as the Jacobite faction refused to come to the negotiating table.

The Orthodox faction has said that it will challenge the ordinance if it goes against the spirit of the Supreme Court verdict. Malankara Orthodox Church secretary Biju Oommen said: “If the ordinance is counter to the Supreme Court verdict, that would be seen as a bid to ‘challenge’ the legal system of the country. We will challenge it legally. We don’t think that the government would come up with such legislation.”

Jacobite Church spokesperson Kuriakose Mor Theophilose welcomed the LDF government’s move as a “brave decision” taken to ensure “a dignified burial” for the bodies of their faithful. “Following the Supreme Court’s order, the bodies of our faithful were being denied a dignified burial. Our human rights and fundamental rights were being violated during this period. We hope that the Orthodox faction will cooperate and support this ordinance,” he told mediapersons.

The chief minister said that relatives of the deceased have the right to complete the funeral rites with a priest of their choice outside the church and then bring the body back to the place of worship for burial. He said every person has the right to be interned in their family cemetery as per the ordinance. He said that the government’s only concern was to ensure speedy burial of the dead. There were several instances when the issue had turned emotive and law and order problems had cropped up, he said.

Recently, the family of Mariamma Rajan, a 91-year-old woman from Alappuzha who had passed away on October 28, had to wait for over a month to hold her funeral because the Orthodox faction disapproved of a Jacobite priest conducting the funeral service. Mariamma’s family too reportedly insisted that only a Jacobite priest would conduct it.

The St Mary’s Church in Kattachira in Alappuzha where the burial was to take place was also closed for a few months after clashes over its ownership. In July 2019, amidst police protection, the church was handed over to the Orthodox sect. Due to the delay in burial at the church cemetery, Mariamma’s family members and friends finally trespassed into the church and buried her body around 5.48 am on December 6, 2019.

Similarly, the burial of Benoy Abraham, a Jacobite BSF jawan who had died in an accident in Rajasthan, was held in Ernakulam on November 19, but saw chaotic scenes as his relatives tried to take his body inside St Mary’s Church in Piravom. Though the family had permission to bury him in the cemetery there, Jacobites are not allowed to do the funeral rites in the church. Police personnel posted at the Church asked the family to leave as chaos ensued. Later, the jawan’s wife pleaded with the police to allow his body to be kept inside the Church for a few minutes. The police did so and the rites were eventually held in another church of the Jacobite faction. The body was later buried in the cemetery of St Mary’s Church.

Wary of this factional war, a family decided to donate their 86-year-old mother’s body for medical research instead of sullying her memory with a battle in a burial ground. On August 23, Karakkattil Sara Varkey passed away in Kolenchery in Ernakulam district. Though the family wished to bury her after performing Jacobite rituals, they decided against it. “Our family did not wish to create a tense situation before the burial,” said KG Paulose, Sara’s son. He finally donated his mother’s body to the Government Medical College in Thiruvananthapuram. “No civilised society can support such type of factional feud,” he told the media.

Lead pic: The bishop of the Jacobite Syrian Church, Joseph Mar Gregorios, and other bishops talking to the media in Thiruvananthapuram during their protest against the poor implementation of the SC verdict in the church feud/Photo: UNI 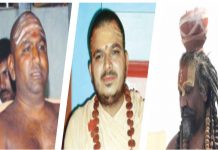