The Congress-backed newspaper, National Herald, could embarrass the party over allocation of prime land in Panchkula in record time by the Hooda government

Associated Journals Limited (AJL), which publishes the National Herald, is finding itself in the dock over the controversial allotment of prime land to the organisation in Panchkula. The organisation, associated with the Congress, has moved the Punjab and Haryana High Court alleging a “witch hunt” against it by the BJP-ruled Haryana government.

AJL, founded by former Prime Minister Jawaharlal Nehru and owned by the Congress, was allotted the plot of land way back in 1982 by the then Haryana Chief Minister Bhajan Lal. However, it is the re-allotment of the land, after it was cancelled for non-payment of dues in 1996, that is now a matter of investigation. The re-allotment of the 3,360 square metre plot was done after waving all rules in 2005 by the then chief minister Bhupinder Singh Hooda.

Moti Lal Vora, chairman of AJL and former union minister, has moved the High Court alleging “witch hunting” by the Enforcement Directorate (ED) through its investigation into the controversial re-allotment of land to the AJL. Vora has said in his petition that the ED was not providing it the Enforcement Case Investigation Report (ECIR) on the basis of which the ED was conducting its probe.

The ECIR, registered by the Chandigarh office of the ED on July 15 last year, was based on an FIR registered by the Haryana Vigilance Bureau on May 5 last year regarding allegations of cheating and corruption against Hooda and others for re-allotting the plot of land to AJL. Subsequently the Haryana government had handed over the case to the Central Bureau of Investigation (CBI). The ED had started inquiries evidently to look into any money laundering involved in the re-allotment of the plot.

Haryana Education Minister Ram Bilas Sharma has pointed out that the market price of the land, when it was re-allotted in 2005 was Rs 23 crore but it was given to AJL for merely Rs 59 lakh. He also pointed out that the entire process, from allotment to mutation, was completed in one single day at a breakneck speed.

Vora, who moved the Punjab and Haryana High Court against the ED notices, said the agency was unnecessarily harassing the organisation by showing documents on the basis of which it had started investigations. ED, in its reply on February 8, 2017, denied the allegations and said that the ECIR demanded by Vora was not a “public document.” It argued that the petitioner was aware of the allegations in the FIR on the basis of which the ECIR was registered. It also claimed that Vora was not supplying the documents sought by the ED and that he was hampering the investigations. Vora had refused to appear before the agency despite three summons, the ED said.

The High Court has adjourned the case for the next hearing on March 2.

Hooda signed the file barely a few months into his first tenure as the chief minister on August 28, 2005. It was only a few days after the then Legal Remembrancer, the senior most law officer who gives legal advice to the government, had stated on the file that the revision petition of the owners against the cancellation of the plot had been dismissed and the “order of resumption (of the plot) has attained finality.” 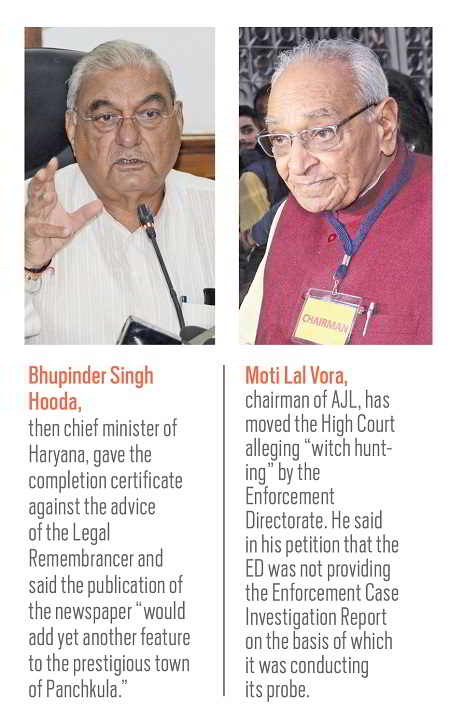 He had written that there was no question of “re-allotment or restora-tion of the plot to the allottee” given the circumstances.

Hooda, however, chose to disregard the advice and wrote on the file that since the allottee has requested and explained circumstances due to which the construction could not be started on the plot, it was a fit case for grant of further extension in time for construction.

He emphasised that the “AJL is a renowned organisation founded by Pandit Jawaharlal Nehru” and that publication of the newspaper “would add yet another feature to the prestigious town of Panchkula”. The building was given a completion certificate, interestingly, just two months before the assembly elections in which Hooda led the Congress to its defeat in 2015.

It was no coincidence that all the paperwork regarding the issue of completion certificate was done on a single day, something highly unusual in government offices.

While the issue is before the High Court, Hooda is also facing inquiries into several Change of Land Use (CLU) cases in which he allowed change of land use from agriculture to commercial or residential which shot up the price of the land. These also include the CLU permission granted to Robert Vadra’s Skylight Hospitality Company which sold prime land to the DLF Group. Besides, a case of allotment of 14 industrial plots to persons associated with him is also under the scanner.

Hooda is likely to remain busy answering uncomfortable questions as the state Chief Minister Manohar Lal Khattar has vowed to get all such controversial decisions examined.