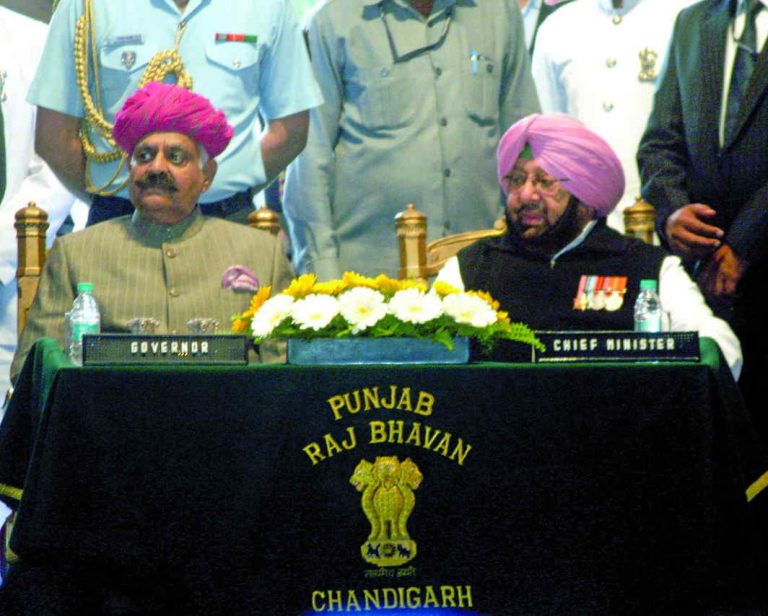 Above: Punjab CM Capt Amarinder Singh is being accused of doling out favours while appointing state law officers. Photo: UNI

Generosity knows no bounds among state governments, especially when it comes to doling out posts to influential people and their relatives. Punjab has taken it to an extreme level

Nepotism is part of the Indian ethos. Doling out favours to those in important positions is quite common among state governments and they do so with impunity. While this does not take away from the qualifications of those who get the job, it is nonetheless helpful to get a lending hand from the government to push one’s case.

Meanwhile in UP, Yogi Adityanath’s government has okayed the appointments of five additional advocate generals. Among them are Neeraj Tripathi, West Bengal Governor KN Tripathi’s son, for the Allahabad High Court, and Vinod Kumar Shahi, son of Justice KD Shahi, for the Lucknow bench. Raghvendra Singh, who is the new AG of UP, is a former BJP MP from Shahabad.

However, Punjab takes nepotism to the extreme. Its chief ministers have been generous in doling out favours to relatives of the high and mighty and Parkash Singh Badal had taken this to new heights. His successor, Capt Amarinder Singh, who had promised clean governance, appears to be following in his footsteps. The recent list of such appointees includes nominations as additional AG, deputy AG, and assistant AG. While some have been included on merit, the fact that many “well-connected” persons are on the list is a giveaway. Among the 121 names announced by the Punjab government, there is Rameeza Hakeem, wife of AG Atul Nanda, relatives of some politicians and at least six former judges. This is the first list; the government had announced it will appoint 154 persons in total. 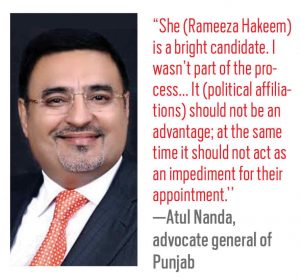 When AG Nanda was asked about the selections, he said these were done by an independent panel based on a laid-down criterion. On his wife’s appointment in his office as additional AG, he said: “She is a bright candidate. I was not part of the process of selection.”

Asked about the high number of relatives of influential persons in the list, he said being the relative of a judge or a politician should not debar them on merit. It should “not be an advantage; at the same time, it should not act as an impediment for their appointment”.

The appointments so far include 25 additional AGs, 49 assistant AGs, 30 deputy AGs, and 17 senior deputy AGs. An official spokesperson of the government said the number of law officers would be brought down from 215 to 154. No deadline has been fixed for naming advocates for the rest of the vacancies.

The spokesperson said the state government, acting on the recommendation of the AG, has decided to overhaul the legal team in pursuance of the Supreme Court directives as per the provisions of Section 3(2) and 3(3) of the Punjab Law Officers (Engagement) Act, 2017. These pertain to a new set of conditions of eligibility which includes experience and minimum earnings, for one to be eligible for the posts of additional and assistant AGs, etc.

Chief Minister Amarinder Singh refuted allegations of favouritism in law officers’ appointments and claimed it was done on the basis of merit. He said all appointments were cleared without any bias and solely taking into account the candidates’ proficiency and experience.

As per norms, additional AGs are paid a monthly remuneration of Rs 1.40 lakh, while deputy AGs receive about Rs 43,000 and assistant AGs about Rs 28,000, besides perks and privileges. They are allowed private practices, except in cases where the state is a party.

—Inputs from Rafi Sami in Jharkhand
and Khurram Nizami in Lucknow