The Yogi Adityanath government is persistent with its current attempts to withdraw the lawsuits related to the Muzaffarnagar riots. As per a Supreme Court ruling, cases against lawmakers are tried at special courts set up in states, the special MP/MLA court and permission for their withdrawal can only be granted by it. The UP government may soon make its move to the special MP/MLA court to withdraw the prosecution against Bharatiya Janata Party (BJP) leaders, including legislators Sangeet Som and newly promoted cabinet minister Suresh Rana and Member of Parliament Sanjiv Baliyan who were accused of instigating the mob during Muzaffarnagar riots of 2013. After recommending withdrawal of prosecution in 75 cases, the UP government has begun the process to withdraw around 7 more cases. The then Akhilesh Yadav led government had slapped the National Security Act charges on them which were later dropped after the court intervened.

The BJP leaders have been claiming that the cases against party leaders were politically motivated. With the Yogi government taking charge in 2017, it began the process to withdraw the 75 cases. The court has already granted the permission for withdrawing some of these cases. Before the government moves to the special court, seeking its permission through the district magistrate of Prayagraj, it has to transfer cases from Muzaffarnagar and other districts to the special court.

It is being said that the withdrawal of cases against some BJP members is getting delayed because political cases (other than the ones related to Muzaffarnagar riots) against some of them, including Sangeet Som, have been registered in varied districts, which will first have to be transferred to the special court. A little backgrounder on Sangeet Som reveals that he has also been charged with cases of flouting section 144 of the CrPC (Code of Criminal Procedure), misbehaving with police and a bevy of other charges in the past. Som has an image of a firebrand politician and a hardliner who allegedly circulated a video associated with the ‘Kawal town incident’ (the murder of cousins Gaurav and Sachin in Kawal village on August 27, 2013), which is claimed to have been instrumental in triggering the riots. He was able to hold on to his seat from Sardhana constituency in the 2017 UP assembly elections by defeating a Samajwadi Party rival. However, Sangeet Som believes that most of these cases registered against him (apart from the riot cases) like the violation of section 144 of CrPC are common charges against any political leader. Speaking to the media he also mentioned that cases were registered against him for acts such as sitting on a dharna against traffic police in 2009 and other such demonstrations.

The state government sought a report on 13 different points from the Muzaffarnagar district administration in the two cases lodged against him at the Civil Lines police station and the Khatauli police station, which included the names of the witnesses and the status of the charges. Muzaffarnagar Additional District Magistrate Amit Kumar Singh told media that the state government had also sought for a report on pending cases against Sangeet Som. However, Mahendra Dev Pandey, the Joint Director, (prosecution) in Prayagraj informed media sources that they have not moved any application in the special court for the permission to withdraw from prosecution in cases registered against leaders, including Sangeet Som and Suresh Rana.

As per the Code of Criminal Procedure, the state government has the power to withdraw from prosecution at any stage before the judgment in instances of ‘Public Interest’. But this can only be done with the consent of the court concerned, with the court being satisfied itself that dropping the cases against an accused would be in the interest of the public. However, senior lawyer Chandraveer Singh Nirwal, who was previously coordinating the Muzaffarnagar riot cases in Muzaffarnagar, believes that the district authorities and the police do not have much say in the reports that are being sought by the state government. It could be possible that these reports being sought from the magistrate are a formality as the ruling government has the power to overrule the DMs’ opinion.

The way the cases related to the riots have progressed had already cast a shadow of doubt over the state. Earlier five prosecution witnesses did a complete U-turn in the court claiming that they were not present when their relatives were murdered while the FIRs mentioned otherwise. Six other prosecution witnesses also turned hostile and deposed that police forced them to sign blank papers. While the police itself could not produce the murder weapons in court for about five cases. Based on the provided testimonies, and holding that witnesses, mostly relatives of those killed, had turned hostile, the court had to acquit all in the 10 murder trials that were conducted between January 2017 and February 2019. These acts already questioned the intent of the government which is consolidating its position with the promises of law and order, and with full political force now allegedly behind the withdrawal of these cases makes it even more unpredictable to hope for any semblance of political and judicial sanctity. 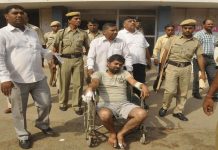