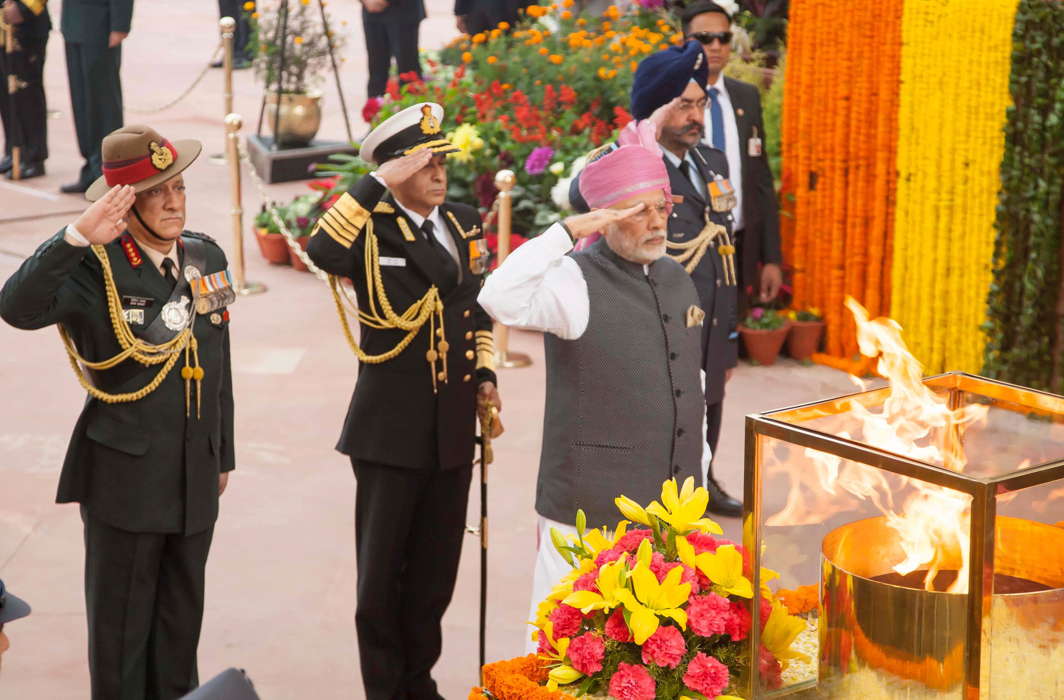 Above: The three service chiefs, Gen Bipin Rawat, Admiral Sunil Lanba and Air Chief Marshal Birender Singh Dhanoa, with the PM; plans to appoint a chief of defence staff post the 1999 Kargil conflict (top) are still on the back burner

If the parliamentary panel on defence spending, headed by BJP leader Murli Manohar Joshi, had not brought out its report and slammed the government for cutting the defence budget at such a critical time, the general public would have been unaware of this grave travesty. The Committee on Estimates report presented in the Lok Sabha last week brought out the fact that the defence budget allocated to the three services was Rs 2.95 lakh crore, down to 1.56 percent from 2.06 percent of the GDP.

This allocation is obviously the lowest since the 1962 Sino-Indian conflict. The Parliamentary Standing Committee on Defence had highlighted four to five months back that the funds allotted to the three services were grossly inadequate, even at a time when national leaders were engaging in jingoism over winning a two-front war with Pakistan and China, while getting the better of either country in the Indian Ocean region. Military modernisation is directly proportional to the capital expenditure allotted for it. It is impossible to ignore the steady decline in capital expenditure, which was 39 percent of overall spending in 2016-17. It came down to 33 percent in 2017-18. This amounts to serious undermining of national security and the committee has recommended the highest priority to improving the state of affairs, especially the military modernisation schemes and projects. It has also pointed out a host of other related shortcomings.

The Army top brass had already told the parliamentary panel that the services are facing serious financial const­raints and finding it extremely difficult to carry out even emergency procurements, while both Pakistan and China,  on the other hand, are going full steam ahead with their respective military modernisation programmes. The committee not only brought out the aspect of declining capital expenditure, but also listed a number of shortfalls in various areas to do with the defence of the nation. The fact remains that after 1947 when the Armed Forces were truncated, a sizeable portion of the three services came to India, with roughly 33 percent of the forces going to Pakistan. India got a large portion of the ordnance factories alongside Hindustan Aeronautics Limited (HAL), mainly due to their geographical locations. Once that was done with, it was incumbent on the then leadership to draw up various doctrines for the three services regarding security of the country. This would have also focussed on developing defence indigenisation programmes.

But it was never done and the lack of a constructive defence doctrinal approach went on to become the Achilles’ heel of the country, as witnessed in the disaster of the 1962 war with China. It was basically a lack of not only defence manufacturing policies, but also a total lack of understanding of the application of air power in joint operations that were to blame. In 1995, it was left to the Rand Corporation to highlight the total lack of a national security doctrine. The parliament was in an uproar and the three services were asked to hurriedly produce some documents which could be termed their respective Fighting Doctrines.

It was due to these shortcomings that India went on to procure arms and critical ammunition, missiles, radar, fighter aircraft, tanks, and all naval ships and submarines from Britain, France and Russia, a practice which continues to this day, with the Dassault Rafale being a prime example. This is due to a total lack of any doctrinal approach to this vital aspect of modernising an aging military fighting system. A number of thinkers in this field like late President Dr APJ Abdul Kalam and others had suggested modernising the fighting systems in a 30:70 ratio (30 percent of high-end technology and 70 percent of standard general technology for tactical use in all the three services). Dr Kalam, then a senior scientific advisor, along with his team, studied the entire defence industrial set-up and brought out a few painful facts. Their report mentioned that the Indian military industry, consisting of nine public sector undertakings like HAL, Bharat Electronics Limited, naval shipyards, and so on, along with 41 ordnance factories and the Defence Research and Development Organisation (DRDO), had not been able to meet the basic demands of the defence services due to late deliveries and cost overruns. Hence the entire Indian defence infrastructure could not boast of even one major fighting system, except for the HF-24 designed at HAL by a German designer called Kurt Tank.

Due to lack of engine manufacturing technology this aircraft had to make do with the British-built Orpheus engines. Even the Light Combat Aircraft Tejas being built for the Air Force and the Navy is fitted with an American power plant. This dismal situation had forced the national defence set-up to go in for foreign purchase and licence production as was done for the Gnat or the Russian MiG-21 and MiG-27 fighter aircraft.

All defence deals taking place now are being asked to adopt the above mentioned provisions, be it the Rafale fighters or the Boeing P-8I maritime surveillance aircraft or the artillery gun deals. Thus, when the Joshi-led parliamentary panel studied the matter, they pointed out a number of lacunae in defence administration. Lack of funding was the main issue, but it was also pointed out that strategic partnership between the Indian entrepreneur and the foreign counterpart has to be properly supervised and regulated. This was exposed recently when the Comptroller and Auditor General of India observed that Boeing, having supplied India P-81 maritime surveillance aircraft is yet to meet the offset payment. Besides, all was not kosher in the selection of the P-81 over the Spanish model. In the case of the MiG fighters, especially the MiG-21, the report has pointed out the large number of accidents. The fact is that the MiG-21s may have a large number of accidents in India, but no one realises that China also went in for the MiG-21s at the same time in 1963. They, however, reverse-engineered the aircraft, calling it F-7, and supplied it to Pakistan, Myanmar, Bangladesh and Sri Lanka who do not have the problem of spare parts or old age that India does. This directly points towards a lack of good policy. We were, in fact, arm-twisted by the Russians while the Chinese could not care less about Russia, and made their own MiG-21.

The report also mentions lack of “jointmanship” between the services while stating that the three armed wings should prepare for war unitedly. That suggests the appointment of a Chief of Defence Staff (CDS) which has been shunned so far by various governments and also due to turf wars between the services. Both the Kargil Review Committee and the follow-up Group of Ministers, headed by then Deputy Prime Minister and Home Minister LK Advani, had strongly recommended appointing a CDS. But, 19 years on, there is no progress in that direction. Clearly, defense modernisation and a proper command structure are the need of the hour but so far, all has been lost in the din of boastful claims and false assurances.