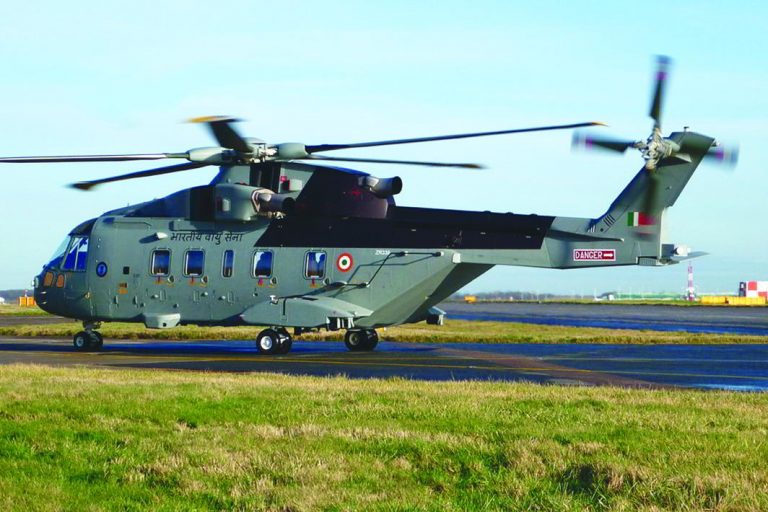 Above: The VVIP chopper of the Indian Air Force

Why would a man who drives a customised 458 Ferrari Spider, has a luxury apartment in the Emirates Crown building in the upscale Palm Jumeirah in Dubai, and heads a global network of accounting and consultancy firms which employ 6,800 professionals operating in 81 countries across all continents, take the risk of getting involved in an arms deal involving bribery and illegal money routing?

The arms deal in question is the VVIP chopper deal involving the sale of AgustaWestland helicopters to India which was scrapped after proof emerged that bribes were paid. (The former chief of the Indian Air Force and members of his family have already been indicted in the investigation). The man in question is Rajiv Saxena, head of M/S UHY Saxena and M/S Matrix Holdings, both located in Dubai, whose wife, Shivani Saxena, is currently lodged in a jail in India in connection with the money laundering case connected to the Rs 3,600 crore VVIP chopper scam.

Last week, the Delhi High Court denied her bail request, declaring that “economic offences need to be treated with a heavy hand”. Shivani Saxena is a director of the two Dubai-based firms started by her husband and which are, by now, well-established in Dubai. Both Rajiv and Shivani, a former journalist, are prominent figures in Dubai’s ultra-rich circles, including the expanding army of wealthy Indians.

Back in India, the other side to the Saxena success story is emerging with the Enforcement Directorate (ED) case against them featuring in court. “The offence alleged against the petitioner falls under the category of economic offences which stand on a graver footing. These crimes are professionally committed by white-collared people which inflict severe injuries on both health and wealth of the nation. Such offences need to be dealt with a heavy hand and releasing such accused on bail will affect the community at large and also jeopardize the economy of the country,” Justice AK Pathak observed.

According to the case filed by the ED, UK-based AgustaWestland International Ltd. had paid 58 million euros as kickbacks through Tunisia-based Gordian Services Sarl and IDS Sarl. These companies siphoned off the money in the name of consultancy contracts to Interstellar Technologies Ltd and others, and these funds were further transferred to UHY Saxena and Matrix Holdings Ltd in Dubai. The ED had arrested Shivani Saxena in Chennai under the provisions of the Prevention of Money Laundering Act (PMLA). She is currently in judicial custody. The ED’s case is that UHY Saxena and Matrix Holdings were the ones through whom “the proceeds of crime have been routed and further layered and integrated in buying the immovable properties/shares among others”.

Saxena was clearly unaware of the seriousness of the charges and had landed in Chennai where the authorities put her under arrest. She had approached the Delhi High Court saying she was unwell and needed specialised medical treatment. Her application was rejected on the grounds that she only needed physiotherapy, which was being provided to her in jail.

Her arrest has added an element of intrigue to the VVIP chopper case, with the role of the Dubai-based Saxena couple being largely overshadowed by the sensational arrests of the ex-Air Chief, SP Tyagi, his relatives and the man who organized the bribe payments, middleman Christian Michel, also based in Dubai. The ED’s investigation found that Michel, declared a fugitive, had diverted $28 million through the two Saxena firms M/s UHY Saxena, Dubai & M/s Matrix Holdings. This $28 million was believed to be kickbacks for officials in the Indian Air Force and defence ministry.

The latest twist in the AgustaWestland tale, the refusal of bail to Shivani, has now turned the spotlight on her and her husband Rajiv Saxena.

Among those arrested was prominent lawyer Gautam Khaitan who reportedly admitted to setting up a shell company to receive money from the Italian helicopter company to be paid as bribes. Some $42 million was directly handled by Michel as part of the payoffs. The latest twist in the AgustaWestland tale, the refusal of bail to Shivani, has now turned the spotlight on her and her husband, Rajiv Shamsher Bahadur Saxena.

Rajiv Saxena moved from Mumbai to Dubai in 1992 and has been hailed as an example of enterprise and success. His first company, UHY Saxena, was one of the first chartered accountant firms in Dubai. Shivani Saxena started her career in Delhi as a journalist and then went into public relations. In 1985, she met Rajiv in Mumbai and they got married.

In Dubai, Shivani’s arrest has shocked the Indian community. In the UAE, Rajiv Saxena’s name is synonymous with accountancy. In 2016, UHY Saxena reported an income of $640 million. His lifestyle–the Ferrari is just one of a fleet of supercars–is much talked about in Indian expatriate circles and the plush offices of UHY-Saxena in Mazaya Business Avenue (Matrix Group Ltd has the same address) are symbolic of a highly successful business. Rajiv’s title is Managing Partner but he is the man who really runs the show. He is a member and honorary treasurer of the Ferrari Club of Dubai and enjoys a pretty hectic social life in the city’s high-flying circles.

UHY Saxena has over 70 professionals working in the four offices situated in the UAE.  In 2001, Rajiv set up the Matrix Group Limited as an independent business unit. The company has interests in hospitality, mining, power, metals and real estate with interests in India, the UK, Europe and Africa. It’s a long way from his middle class origins in Mumbai but the ultimate irony is that a man who audits other companies and institutions looking for illegalities and shady bookkeeping is now facing an audit of his own accounts. If the denial of bail to Shivani is based on solid evidence, that bright yellow Ferrari could be gathering dust for some time.