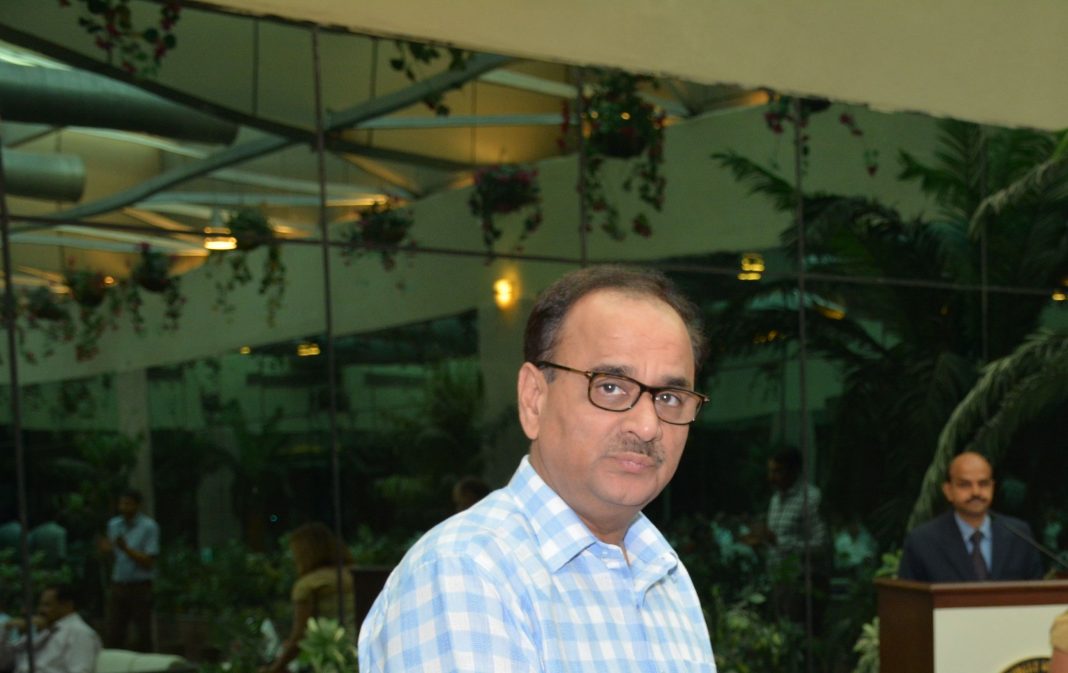 The sordid episode of CBI director Alok Verma’s reinstatement and later sacking shows the power games embroiling India’s top investigating agency. As polls near, this drama could spill over into the political arena

The recent goings-on at the highest echelons of the CBI and the government make for a thrilling Bollywood script. A prime minister and his palace intrigue, deafening political uproar, courtroom drama, feuding cops, corruption scandals—the script has all it takes to set cash registers ringing. But this potboiler isn’t something you enjoy watching while gorging on popcorn and cola. It is a grim reality that makes a mockery of India’s democracy and its institutions.

Late evening on January 10, Alok Verma was summarily discharged as CBI director, a post he was conditionally reinstated to by the Supreme Court just 48 hours earlier at the end of an acerbic legal battle against the central government and the Central Vigilance Commission (CVC).

The verdict for his reinstatement, authored by Chief Justice Ranjan Gogoi, had slammed the manner in which Verma was sent on leave by the CVC and the government through a midnight order on October 23. However, it also made Verma’s continuance as CBI chief subject to a final decision to be reached within a week by the selection panel that had appointed him. The selection panel consists of the prime minister, the chief justice of India and the leader of Opposition (or the largest Opposition party) in the Lok Sabha.

The chief justice, having authored the verdict on Verma’s plea challenging the October 23 decision, recused himself from the selection panel and nominated Justice AK Sikri to take his place instead. Unsurprisingly, the same principles of conflict of interest and morality did not force Modi to recuse himself from the panel. This, despite the role of the Prime Minister’s Office, and by extension the prime minister himself, in allegedly forcing the October 23 action against Verma and interfering in the CBI’s functioning, being questioned on several occasions.

Verma was shunted out after Modi and Justice Sikri concluded that some allegations made against him in a CVC inquiry report were grave enough to warrant action. However, seven other allegations investigated by the CVC against Verma, including one of receiving bribes, were found to be unsubstantiated (see box). The selection panel’s third member, Congress leader Mallikarjun Kharge, demanded that Verma be allowed to continue as CBI chief and also present his defence before the panel.

Soon after the selection panel’s decision, the government decided to transfer Verma as Director General, Fire Services, Civil Defence and Home Guards. There was no explanation on how an officer dismissed from heading one government agency on grounds of professional misconduct was fit to head three other units.

Verma, a 1979 batch IPS officer, in a tersely worded letter to Chandramouli C, secretary of the Department of Personnel and Training, turned down his new posting and instead, resigned from service on January 11.

The news of Verma’s resignation coincided with another development. The Delhi High Court, in a verdict authored by Justice Najmi Waziri, dismissed a plea filed by CBI special director Rakesh Asthana seeking quashing of the FIR filed against him by the probe agency. This was linked to a bribery case involving Hyderabad-based businessman Sathish Babu Sana and controversial meat exporter Moin Qureshi. The Court also vacated the interim stay on Asthana’s protection from arrest and directed the CBI to complete its probe against him within 10 weeks.

That the genesis of the present crisis in the CBI began with the feud between Verma and Asthana is now widely known. A bulk of the charges against Verma that were investigated in the CVC inquiry came from complaints filed by Asthana. Verma has maintained that Asthana’s complaints to the CVC were the direct result of the CBI closing in on his alleged financial improprieties and other misconduct. Further, Verma’s frosty equations with Central Vigilance Commissioner KV Chowdary, the author of the inquiry report, are well-known and precede the current imbroglio by over a year.

When Verma was sent on leave on October 23, there was an alleged attempt to hush up the cases against Asthana. All CBI officers who were probing Asthana were either transferred or reassigned on October 24 by Nageswara Rao, the interim CBI chief. In the 48 hours that Verma returned as CBI director following his reinstatement, he rescinded these transfers. But then, Rao returned as the interim CBI chief on January 11, and promptly restored his earlier orders of October 24.

In contrast to the urgency it showed in shunting Verma out of the CBI, the government and the CVC are yet to take a similar action against Asthana, a 1984 batch Gujarat cadre officer known for his proximity to Modi. Though currently on forced leave, Asthana continues to hold the rank of CBI special director.

Coming to Verma’s resignation letter, he notes that “natural justice was scuttled and the entire process was turned upside down” to ensure that he was removed from the post of CBI director. He goes on to say that the selection committee “did not consider the fact” that the entire CVC report is premised on charges alluded by Asthana “who is presently under investigation by the CBI” and that the “CVC only forwarded a purportedly signed statement of the complainant, and the complainant never came before Hon’ble Justice (Retd.) AK Patnaik (supervising the inquiry)”.

The Supreme Court had, while hearing Verma’s plea, directed that the CVC inquiry must be supervised by Justice Patnaik, a former apex court judge. Verma further says that “Justice Patnaik has concluded that the findings/ conclusions of the report are not his”.

Justice Patnaik has confirmed Verma’s claim. In an interview to The Indian Express, Justice Patnaik termed Verma’s sacking as a “very, very hasty decision”. “There was no evidence of corruption regarding Verma….I have said in my report (filed separately with the Supreme Court) that none of the findings of the CVC’s report are mine,” said Justice Patnaik.

His comments leave Modi, and even Justice Sikri, in a very embarrassing and suspicious position. Is it not surprising that the selection committee, which included a sitting Supreme Court judge, did not find it important enough to examine Justice Patnaik’s views that contradicted the CVC report and gave Verma a clean chit?

The slugfest over Verma’s ouster has spilled over into the political arena. Congress president Rahul Gandhi has been claiming that Verma was sacked to prevent him from ordering a preliminary inquiry into the controversial Rafale deal. “Why is the PM in such a tearing hurry to sack the CBI Chief? Why will he not allow the CBI Chief to present his case in front of the selection committee? Answer: RAFALE,” Gandhi tweeted when the selection committee was still in a meeting to decide Verma’s fate. After Verma was sacked, Gandhi tweeted: “Fear is now rampaging through Mr Modi’s mind. He can’t sleep. Sacking the CBI Chief Alok Verma twice in a row, clearly shows that he is now a prisoner of his own lies.”

While keeping up the pressure on Modi by shooting from Verma’s shoulder is a political necessity for the Congress, it also knows that for now it has to be careful with the tenor of its diatribe. Given that the decision to sack Verma had the concurrence of the representative of the chief justice on the selection panel, the Congress does not want to antagonise the top court. However, party leaders told India Legal that Justice Sikri is due to retire in March, and if, like many of his retired peers from the top court, he takes a post-retirement job offered by the Modi government, “the allegation of a quid pro quo would be easier to raise”. 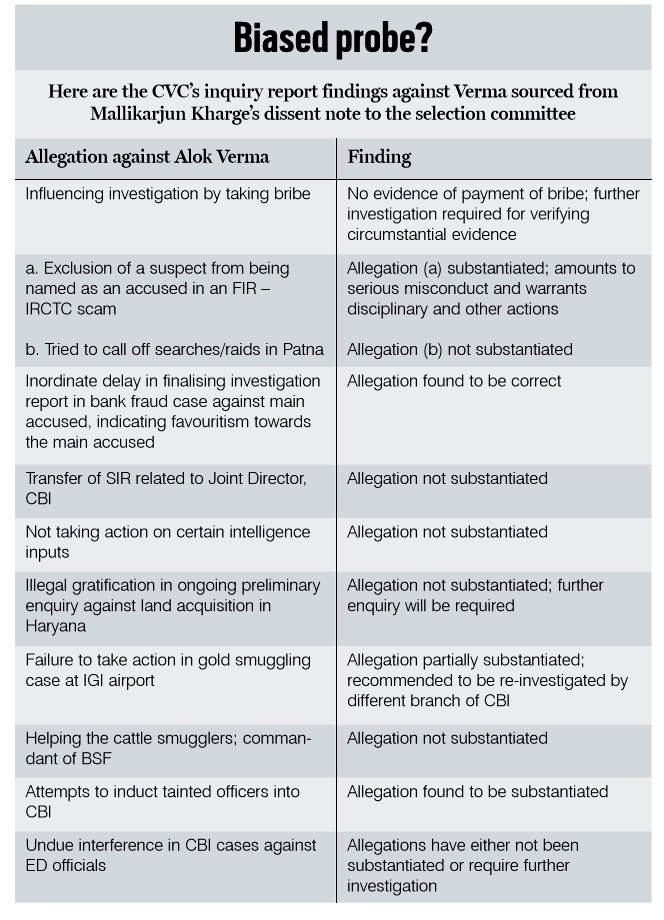 India Legal has also learnt that the CBI could soon proceed with an investigation against Verma on Asthana’s allegations. Verma’s troubles aren’t over yet. All eyes are now on who the selection panel will select as the next full-time director of the CBI. Another excerpt from Verma’s resignation letter must be quoted here.

“Institutions are one of the strongest and most visible symbols of our democracy and it is no exaggeration that the CBI is one of the most important organizations in India today. The decisions made yesterday will not just be a reflection on my functioning but will become a testimony on how the CBI as an institution will be treated by any government through the CVC who is appointed by majority members of the ruling government. This is a moment for collective introspection, to state the least.”

One wonders if the prime minister, months before the Lok Sabha poll campaign, has time for this introspection.