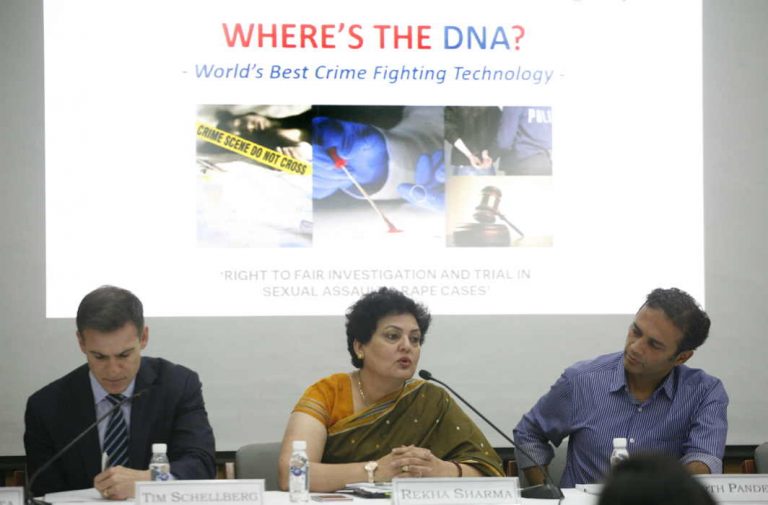 Above: (L-R) Tim Schellberg, Rekha Sharma and Sidharth Pandey during the panel discussion on the use of forensic DNA evidence/Photo: Anil Shakya

Though India lags behind in conducting DNA tests on criminals, such evidence will boost rape convictions

In crimes against women, a DNA databank, along with a sexual offenders’ registry, will be an important step in ensuring justice. However, current investigation methods in India lag behind in this respect.

This came up during a recent panel discussion in Delhi where the chairperson of the National Commission for Women, Rekha Sharma, slammed investigators for the methods used in a crime scene and said that DNA data should be secured. Sharma told India Legal that she is against any provision for deletion of an entry from either the sex offenders’ registry or the national DNA databank. “I don’t think there’s any harm in keeping the data as this will help in future cases also,” she said. “Even though the person may be innocent in a case, the data can be used later.”

The Union government has been working on a crime registry for those accused or convicted of sexual offences. The government also seeks to create a national DNA databank of accused persons under the DNA Based Technology (Use and Regulation) Bill, 2017.

During the discussion, the NCW chairperson praised the ministry for women and child development for proposing the setting up of five forensic DNA labs in the next three months, but said that the country needs more such labs given its large population. Panel moderator and journalist Sidharth Pandey noted that out of 34,000 sexual offence cases registered in India in 2015, only 0.28 percent had used DNA evidence.

The discussion was organized by Gordon Thomas Honeywell Governmental Affairs. Tim Schellberg, Gordon Thomas’ group founder and president, said India like the US, has a high crime rate and a sexual assault problem, which raises the need for use of forensic DNA evidence. “Absence of a database in India is really not a problem because great success can be accomplished simply by doing more effective case work against known suspects,” he said. “Our research estimates that in India, about 10,000 case work samples are submitted which can be developed into DNA profiles.”

Ravi Kant and Vivek Sood, both senior advocates and social workers, said that under Section 53A of the CrPC, a suspect in a criminal investigation has no right to refuse a DNA test. “The idea of the accused having the right to refuse his DNA probably came from the misconception that DNA is the most personal information that discloses much about you,” Schellberg said. “When DNA is given for a criminal investigation, we’re looking at only that part of the DNA that distinguishes me from you. The test doesn’t look into your eye colour or anything like that. It just tests to see if the crime scene sample matches yours or not.”

Shellberg also cited China’s use of DNA evidence to trace missing persons. “Whenever a child goes missing in China, authorities take the child’s DNA from the family,” he said. “Then they collect DNA from high-risk groups such as street children, prostitutes and those in orphans. They have managed to reunite 38,000 children with their families.”

But Jas Ram Kain, chairperson of Child Welfare Committee, Lajpat Nagar, questioned the reliability of DNA evidence. He recounted how a child who had been missing for a decade was found and reunited with his supposed parents, but when the investigating officer conducted a DNA test of the mother and the child, the results were negative. “Maybe the samples get mixed in the lab. Generally, the samples don’t get mixed. It is in the hands of the technician,” explained Dr Shalini Gupta, associate professor at King George’s Medical University, Lucknow. Reports of lab errors leading to false convictions have been emerging in countries like the US, where DNA evidence is often used as the clinching evidence in a prosecution.

The panellists said that desired results can be obtained from DNA samples if they are stored and tested properly. “This whole issue of DNA testing needs to be supported with a proper legal framework which will ensure the rights of individuals. DNA, like Aadhaar, is very private,” Kant said.

“DNA is a major step forward considering the kind of investigation methods we have in our country,” Sood added. The panelists were unanimous in their criticism of current investigation techniques. “I visited Bulandshahr a day after a mother and daughter got raped on the highway. I saw that the undergarments of the women were lying at the crime scene,” Sharma said. “Before me, so many people had been to the site.”

The NCW chairperson added: “Investigating officers don’t know anything about investigation—how to secure a crime scene, how to collect evidence, how to even guide the victim. They don’t even tell her that she should not take a bath till the medical exam is conducted.”

DNA evidence, Kant said, can bolster the prosecution’s argument, as it did in the Nirbhaya gangrape case where three courts gave consistent verdicts against the accused. Last year, the Supreme Court had observed while upholding the death sentence awarded to four of the convicts in the Nirbhaya case: “The DNA profiling, which has been done after taking due care for quality, proves to the hilt the presence of the accused persons in the bus and their involvement in the crime.”

This is all the more reason to pay attention to this very important part of crime investigation.