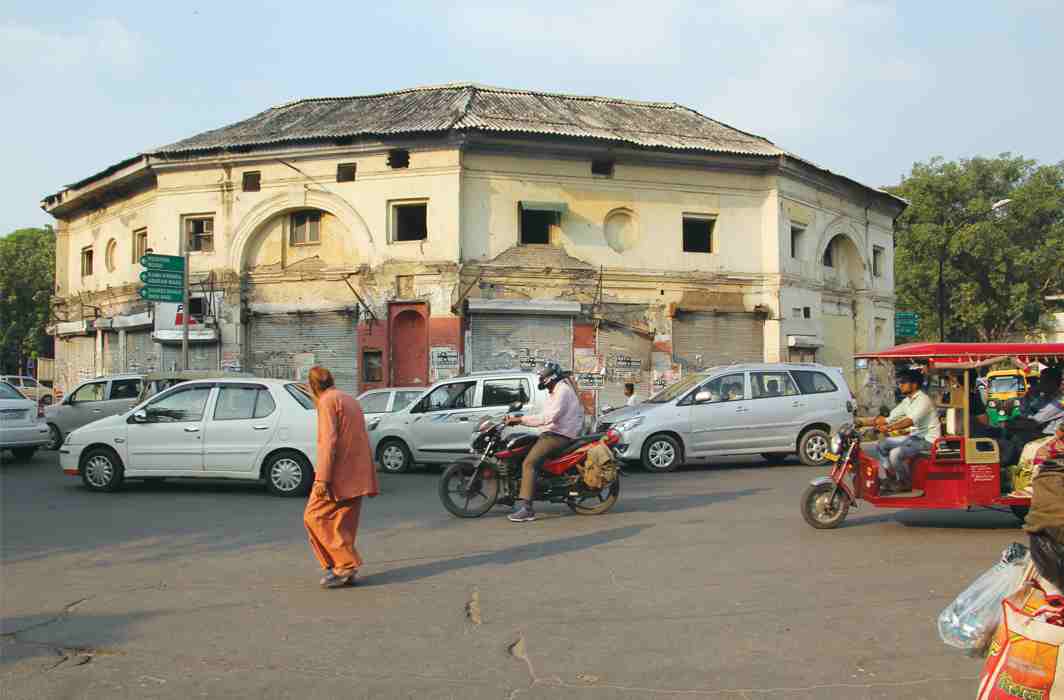 Above: Attempts are underway to convert Gole Market in Lutyens’ Delhi into a museum, and shops have been relocated. Photo: Bhavana Gaur

The sealing and de-sealing of two Lutyens’ Delhi shops has sparked off a controversy with a complaint reaching the CVC. Are allegations of corruption in high places true?

Two small shops—licensed to sell poultry products and meat—in the heritage Gole Market complex of Lutyens’ Delhi, barely a kilometre from Connaught Place, have brought to light illogical and possibly illegal activity within the New Delhi Municipal Council (NDMC). Rules, including a Supreme Court directive, have been flouted and fingers are being pointed to those at the very top of the food chain.

While the incident is seemingly small —the de-sealing of the shops after the NDMC itself had sealed them for several violations—voices within the NDMC speak of several laws and rules being violated. According to a complaint lodged with the Central Vigilance Commission (CVC) by advocate PK Chaudhary, the entire de-sealing was done with alleged kickbacks to the top management of the NDMC. While the corruption angle remains unqualified in the complaint, events certainly indicate illegality within a body that has been entrusted with the preservation of heritage structures in the national capital.

Sources within the CVC have told India Legal that the Chief Vigilance Officer of the NDMC has now taken up the task of looking into the complaint and though “it will take time for all files to be scrutinised”, the process seems to be underway. The procedure laid down is that the chief vigilance officer of the organisation concerned makes his/her own report which is then forwarded to the CVC.

The controversy started as an NDMC lease expiry and rental rules violation by the two shops. Status quo would have been maintained had the licences of the shops been renewed like 25-odd other shops in the complex. The lease licences of shop Nos. 36 and 37 had expired in 2012 and 2013, respectively.

However, when the owners of the shops—Arvinder Kaur Bedi and her son Harmanjeet Singh Bedi—applied for renewal, it was found that they had committed several violations and their applications were turned down. The owners even approached Meenakshi Lekhi, MP from New Delhi and a national spokesperson of the BJP. Her intervention failed to provide any relief. 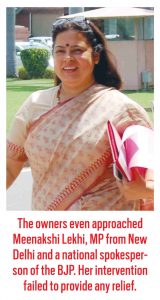 Rules state that in a case of a lease lapsing, there remains little leeway for readjustment. The property must undergo fresh bidding (possibly an open auction) and the highest bidder would be awarded the licence. However, this did not happen because the auction process could not be held. The shops were sealed because they violated the directive of the monitoring committee set up under Bhure Lal by the Supreme Court.

The shops in question are not in the main Gole Market building on Lady Hardinge Road, but in the phalange across the traffic roundabout. While all shops from the main heritage building have been shifted—the main building will possibly be converted into a museum—this phalange still has shops with very old rental deeds that have mostly been renewed.

The two shops carried out the innocuous business of selling poultry, fish and meat products. There are other shops in the area dealing in similar pro-ducts, but they are off the Gole Market complex.

The reasons why the shops were sealed were as follows:

These are gross violations of all laws associated with a heritage structure. However, a little later, the shops were suddenly de-sealed. Not only was it against the decision of the NDMC itself, it was against the law of the land and a Supreme Court directive against defacing and misusing heritage property. (See SC order in Aggarwal & Modi Enterprises case).

Here are some interesting notations from a copy of the NDMC file related to the case of the two shops accessed by India Legal which reveal how legal ad-vice was ignored to allow the de-sealing: 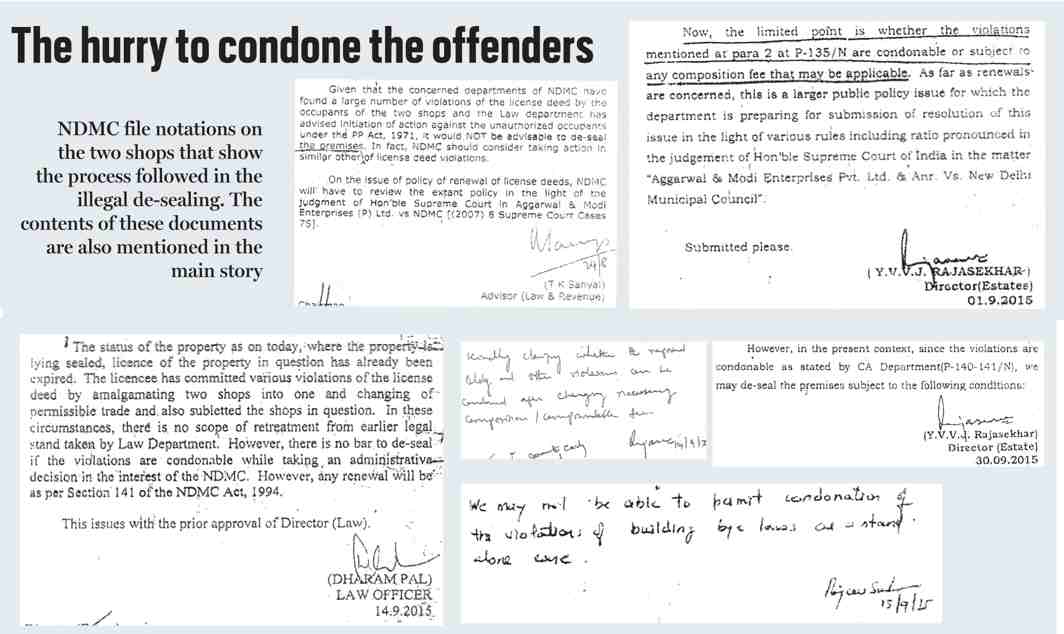 The law department of the NDMC after a thorough study had come to the conclusion that the shops not be de-sealed. The office of TK Sanyal advisor (law and revenue) made the following noting (page 138/N): “Given that the concerned departments of NDMC have found a large number of violations of the license deed by the occupants of the two shops and the Law department has advised the initiation of action against the unauthorized occupants under the PP Act, 1971, it would NOT be advisable to de-seal the premises. In fact, NDMC should consider taking action in similar other cases of license deed violations.”

“On the issue of policy of renewal of license deeds, NDMC will have to review the extant policy in the light of the judgment of Hon’ble Supreme Court in Aggarwal & Modi Enterprises (P) Ltd vs NDMC [(2007) 8 Supreme Court Cases 75].”

Sanyal’ s conclusions were referred to in a handwritten note to the secretary and to the director of estates. But the latter did not go along with the observations made by the law advisor.

Voices within the NDMC speak of several laws and rules being violated in the de-sealing of the shops after the Corporation had sealed them on several counts.

Rajasekhar went on to say, in the same note: “Now the limited point is whether the violations mentioned in para 2 at P-135/N are condonable or subject to any composition fee that may be applicable.” The note also mentions the SC Aggarwal & Modi Enterprises SC order, though that order is specific about property being “sold, leased, or transferred in fair competition”.

The following is the relevant section of the Supreme Court order in the Aggarwal & Modi Enterprises … vs New Delhi Municipal Council of 31 August, 2007 case

“22. The mandate of Section 141(2) is that any immovable property belonging to NDMC is to be sold, leased, licensed or transferred on consideration which is not to be less than the value at which such immovable property could be sold, leased, or transferred in fair competition. The crucial expression is “normal and fair competition”. In other words, NDMC is obligated to adopt the procedure by which it can get maximum possible return/consideration for such immovable property. The methodology which can be adopted for receiving maximum consideration in a normal and fair competition would be the public auction which is expected to be fair and transparent. Public auction not only ensures fair price and maximum return it also militates against any allegation of favouritism on the part of the Government authorities while giving grant for disposing of public property. The courts have accepted public auction as a transparent mean of disposal of public property.”

This note went back to the law department, where law officer Dharam Pal noted on September 14, 2015: “The status of the property as on today, where the property is lying sealed, licence of the property in question has already been expired (sic). The licencee has committed various violations of the license deed by amalgamating two shops into one and changing of permissible trade and also sublet the shops in question. Under these circumstances there is no scope of retreatment from earlier legal stand taken by Law Department. However, there is no bar to de-seal if the violations are condonable while taking an administrative decision in the interest of the NDMC. However, any renewal will be under 141 of the NDMC Act, 1994.”

The file went back to the director (estates), Rajasekhar. He made this noting by hand: “Kindly clarify whether the… Bldg and other violations can be condoned after charging necessary composition/compoundable fee.”

The file then moved to the civil architecture department and the handwritten note by the officer on September 15 was clear: “We may not be able to permit condonation of the violations of building bye laws as a stand-alone case.”

Which, in simple words, means NO.

On September 16, 2015, Rajasekhar sent an official note, saying, among other things: “…However, in the present context, since the violations are condonable as stated by CA Department… we may de-seal the premises subject to the following conditions…” (four conditions were listed). The accusation is: How could Rajasekhar say this, despite responsible departments of the NDMC being against it?

The complainants have shown these major irregularities while pointing accusing fingers at top officials. The CVC seems to have already moved in the matter, though SC Sinha, Director CVC, told India Legal: “It is our policy at CVC not to reveal any action of the organisation to any third party. I cannot remember off hand which file or case this refers to, and if we have acknowledged receipt of any complaint, due process of law will be followed.”

A shopkeeper adjacent to the shops in question told India Legal: “We all had our leases renewed. I have no idea why they (Bedis) could not. I guess there must have been some irregularities.” However, the fact that the restaurant was running “even a year back” was confirmed. Also confirmed was the fact that the shops were “quite suddenly” de-sealed.

The shops are shut now, but the issue remains hanging fire.