Much feted for his crackdown on the narcotics trade, the arrest of a cop for conniving with the drug mafia has come as a major embarrassment for the police establishment

Till a few months ago, Inspector Inderjit Singh of the Punjab police was being feted for arresting drug peddlers and making drug recoveries. He was given several commendation certificates and also a blanket permission to conduct raids in any part of the state. In the government and in the public’s eye he had acquired a reputation of being a super cop and a “drug specialist”.

No one, however, noted that in all the cases investigated by him, the conviction rate was practically zero even though he had claimed recovery of drugs and nabbing of culprits. Investigators have now analysed 13 cases handled by him in Taran Taran district where he was posted as crime investigating agency (CIA) in-charge. The recoveries included a single haul of 19 kilograms of heroin but all the cases fell through in the courts and the accused walked away free. No one was convicted but the inspector was rewarded. Besides the commendation certificate, the officers who make such big recoveries, are also given cash awards. 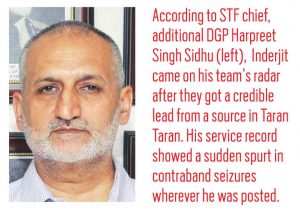 What has now become evident, which strangely none of his senior officers saw through, is that he deliberately weakened the prosecution case evidently after striking a deal with the accused. It was thus a win-win situation for him. Inderjit, now faces dismissal from service and has been booked under Sections 59 (2) (6), 218, 466, 471 and 120-B of IPC, 24, 54 and 59 if Arms Act and sections 22, 61 and 85 of the NDPS Act.

One of the technical grounds on which most prosecution cases against the accused floundered was that the “inspector” was not authorised to conduct the raids! There is substance in this argument taken in defence of the accused. It has now been revealed that Inderjit actually held the rank of only a head constable and was given a “local” rank of Inspector. Under the internal rules of the Punjab police, anyone can be given a higher rank as a reward for good performance but he shall continue to get the salary and emoluments as per his previous posting. Thus in police records the inspector continued to be a head constable. Apparently, he was sharing this little secret with the accused facing prosecution, of course, for a consideration.

Inderjit, known as a “drug recovery specialist” employed a modus operandi which kept everyone happy. He himself got appreciation and certificates, besides the permission to raid under the jurisdiction of any police station in the state. His seniors would get themselves photographed with the recovered haul of drugs and the politicians would do some chest thumping to declare to the media that they were “sincere” about tackling the menace and that the government was waging a war against drugs.

With the “specialist” keeping a part of the booty with himself and striking a deal with the drug smugglers and traders to ensure that they would be left off lightly, the well-oiled racket was flourishing in the state. The recoveries from the several residences maintained by Inderjit provide tell-tale evidence. 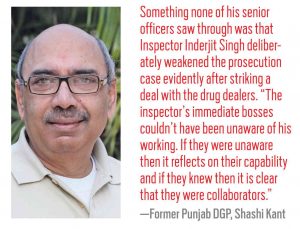 The Special Task Force (STF) constituted by the Capt Amarinder Singh government, which conducted early morning raids at his residences and office, recovered four kilograms of heroin, valued at several crores in the international market, besides three kilograms of crude heroin known as brown sugar or smack which is much in demand in the domestic market. Other recoveries included an AK-47 assault rifle, a 9 mm Italian-make pistol, a 0.38 bore revolver and around 380 live cartridges. Besides Rs 16.5 lakh in cash and $3550 and a couple of cars were also recovered from him.

It is amply clear that either his seniors were too gullible or inefficient to comprehend what was going on or were part of the racket. Even the state vigilance department which is supposed to keep a watch on wrongful activities by government and police officials had been turning a blind eye on Inderjit’s activities.

The new STF chief, additional DGP Harpreet Singh Sidhu, who has been specially recalled from an assignment outside the state to head the unit, said that Inderjit came on his team’s radar “after we got a credible lead from a source in Taran Taran. His service record showed a sudden spurt in contraband seizures wherever he was posted.”

Former DGP Shashi Kant, who had been waging a relentless war against the drug menace and the nexus between politicians and personnel of law enforcement agencies, while appreciating the STF for its success, has demanded that the role of Inderjit’s superiors must be probed. He said his “immediate bosses couldn’t have been unaware of his working. If they were un-aware it reflects on their capability and if they knew then it is clear that they were collaborators”.

Sources in the security agencies said it was impossible for drug smugglers and peddlers to operate without the help of local politicians and the police. A few years ago the head of the Narcotics Control Bureau (NCB) Shaji Mohan was similarly arrested and a huge quantity of narcotics was found in his possession. He is serving a jail term. The arrest of Inderjit Singh could well be the proverbial tip of the iceberg.