Above: The ICADR was set up in 1995 under the Societies Registration Act and had gained credibility in the field of alternative dispute resolution/Photo: ICADR

At midnight on March 2-3, the centre issued an ordinance called the New Delhi International Arbitration Centre Ordinance, 2019. The Government of India gazette notification said its purpose was the creation of “an independent and autonomous regime for institutionalised arbitration and for the acquisition and transfer of the undertakings of the International Centre for Alternative Dispute Resolution and to vest such undertakings in the New Delhi International Arbitration Centre (NDIAC) for the better management of arbitration so as to make it a hub for institutional arbitration and to declare the NDIAC to be an institution of national importance….”

Lofty ideals? But retribution was quick in coming as barely four days later, in a dramatic turn of events, the Delhi High Court imposed a stay on the ordinance whose aim was to replace the International Centre for Alternative Dispute Resolution (ICADR), a premier institution set up in the capital in 1995 under the Societies Act, with the centre-controlled NDIAC.

Dr HR Bhardwaj, former Union law minister and founder patron of the ICADR, told India Legal: “There was no valid ground for the government to issue this ordinance. This is a grossly ill-advised move and reeks of illegality as it attempts to take over the properties and assets of a registered society. The ICADR has a 25-year-old history and its members are some very distinguished jurists….Even the chief justice of India is involved with the institution in his capacity as its chairperson. Ostensibly, the move has been justified on the grounds that the ICADR was not performing up to expectations. If that was indeed the case, the government should have used other less radical and adversarial means to address the problem.” Bhardwaj went on to say that as the patron of the institution, he had suggested to the government that a committee be constituted to look into the issues plaguing its functioning, if any.


The ICADR was set up in 1995 under the Societies Registration Act and is considered a pioneer in the field of alternative dispute resolution. It was established to promote, popularise and propagate alternative dispute resolution methods to facilitate early resolution. The society is an autonomous organisation working under the aegis of the Supreme Court of India with its headquarters at New Delhi and regional centres at Hyderabad and Bengaluru. The society has established a vast network in international arbitration and has received grants from various institutions, including the World Bank.

A highly placed legal luminary is of the view that by bringing in the ordinance, the centre has virtually forced its way into taking over the institution. “The government has bulldozed its way to take over the centre. It has confiscated the building and money, and the employees are facing an uncertain future.” He added that the ICADR was established with the primary aim of making it similar to top arbitration centres that exist in London, Singapore and other cities but with the government taking it over, it will lose its credibility.

This credibility was never under question since its inception. Many prominent figures from the legal fraternity and other fields have participated in its general body and governing council meetings. Being a society, the institution was self-sustainable. The assets and properties of the society were created out of the subscription of its members, rental income, while another source of income was from organising training programmes, seminars, conferences, etc; and there has been no contribution from the government except the grant-in-aid and a corpus of Rs 3 crore and grant of Rs 27.72 crore given in 1995 at the time of registration. ICADR’s chapters in Telangana, Andhra Pradesh, and Karnataka have received grants from the respective state governments to the tune of Rs 17 crore.


In its organisational set-up, the society has prominent figures from legal and other fields in its general body and governing council, like Attorney General of India KK Venugopal, senior advocate Fali S Nariman, senior advocate, K Parasaran, senior advocate and the former deputy chairman of the Planning Commission, Montek Singh Ahluwalia, and the like with Bhardwaj as its patron and the chief justice of India as its chairperson. The institution from 1998-2019 has also organised about 16 international conferences for imparting knowledge/training in arbitration, conciliation and mediation in all major cities in the country. The conferences have been attended and addressed by eminent foreign dignitaries, especially from countries that are known globally for arbitration. The society has entered into several cooperation agreements with many foreign organisations covering the areas of mutual exchange of information, mutual assistance in conduct of proceedings and mutual assistance in organising, training and other activities.

A former law secretary, who did not want to be named, told India Legal: “Having the chief justice of the Supreme Court as its chairman meant that the Centre had some credibility, but that’s now gone and the irony is the current CJI is remaining silent on the issue.”

On its part, the government has maintained that the institutional changes were not something out of the blue and had been in the pipeline for nearly a year and a half. A source said that as early as August 2017, the government had announced that it would approach Parliament for making necessary amendments in the existing law aimed at turning India into an international arbitration hub. 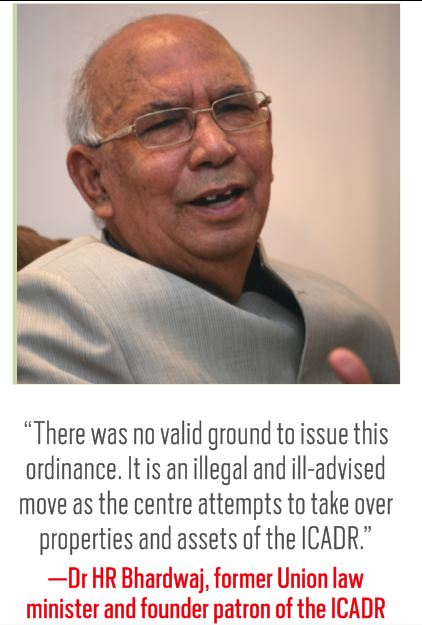 Minister for Law and Justice Ravi Shankar Prasad had then announced that an autonomous body to be known as the Arbitration Promotion Council of India, having representatives from all stakeholders, would be set up for grading arbitral institutions in India, and an arbitration bench will be created to deal with such commercial disputes. A committee had even been set up under re­tired Supreme Court judge BN Srikrishna to suggest changes. “The changes in the arbitration law proposed by the committee are not in isolation but part of the larger aim of ensuring good governance,’’ the law minister had said while releasing the report in 2017. “If Singapore can become an international hub, then why not India,” Prasad was then quoted as saying. The Committee had also suggested a revamp of the International Centre for Alternative Dispute Resolution (ICADR) working under the aegis of the Ministry of Law and Justice, Department of Legal Affairs. It wanted the ICADR to be declared an institution of national importance and also take­over of the institution by a statute. The Committee was of the view that a revamped ICADR had the potential be a globally competitive institution, Prasad had stated then.

However, the ICADR was not convinced. With the ordinance being issued late on March 2, the options available with ICADR to challenge it were limited. On March 6, the ICADR knocked on the doors of the Delhi High Court seeking an urgent hearing against the ordinance, but failed to get it. In the meantime, the centre wrested control of its headquarters at Vasant Kunj whose estimated value, land and infrastructure included, is around Rs 500 crore. Besides taking possession of the premises, it seized the accounts of the ICADR and nearly Rs 30 crore deposits of the institution were frozen. “The ICADR staff was not allowed to enter the premises. The accounts have been frozen. The cheques issued prior to issuance of the ordinance have not been honoured. The doors have been shut on us. This is blatant confiscation of an institution,” said a source speaking to India Legal.

On March 7, the ICADR matter was squeezed into the supplementary cause list in the High Court for a post-lunch hearing. Senior advocate Dushyant Dave, representing the ICADR, argued that the enactment of the ordinance was unconstitutional and the forceful occupation of a premier institution whose chairperson is the chief justice of India does not send positive signals within the legal fraternity. “What is the emergency to bring an ordinance? What is the difference between the existing institution and the one proposed by the centre? Government is issuing tenders to fight arbitration and simultaneously discouraging its own institution to attract global traffic on arbitration….There aren’t any charges of financial impropriety on the institution. In fact, government could work with us and use our facility. We seek protection from the honourable court,” said Dave.

The ICADR has a total of 33 employees, who are bound to lose their jobs as the ordinance does not consider over the liabilities of the institution. “The government will take everything including the furniture in the institution, and leave behind a sheet of paper, the registration certificate of the society,” added the source.

The centre’s counsel, defending the ordinance, informed the Court that it was issued on the satisfaction of the President of India, and it is obvious that the highest office would have seen merit in the ordinance; though it is subjective, and definitely not out of judicial purview. “The government is acting as per the recommendation of BM Srikrishna report on improving arbitration. The ordinance is in accordance with the report. India’s ranking on the World Bank’s Ease of Doing Business Report has suffered due to poor performance in arbitration. The prime minister has assured the world on improving ease of doing business and commerce in India. Every day we are suffering, as we do not fare well on the indices of ease of doing business, and our arbitration is below global standards…,” the centre’s counsel pleaded before the court.

Taking a sharp jibe at the centre’s counsel, the Court said: “What is the emergency in bringing the Ordinance….you cannot take over institutions overnight….If you take over the institution, how will they continue?”

The centre further argued that the institution was funded by the government and it had every right to take over an institution that failed to deliver results, and replace it with an efficient set-up. “It is an urgent situation; we have to improve our credibility in the world on ease of doing business and commerce in the country. In this scenario, the urgency has arrived. With the proposed new institution via this ordinance, we will have a healthy and vibrant mechanism to address commercial issues,” submitted the centre’s counsel.

The Court junked the centre’s argument that the ICADR has merely sorted out 55 arbitrations in a period of 24 years, and its record speaks volumes of its failure as an institution. “We are considering the constitutional aspect of the ordinance, and not the functional aspect or performance of the institution since its establishment….All of a sudden you have come with an ordinance,” said the Court.

In fact, justifying the ordinance, the centre told the Court that after the bill to replace the ICADR was passed by the Lok Sabha, the institution knew that the ordinance was on its way. “They knew what is coming,” said the centre’s counsel.

The statement perturbed the Court, and the chief justice said that the government too had failed on many counts, especially in appointing judicial officials in district-level courts.

Finally, the Court said that it was staying the ordinance aimed at replacing the ICADR with a centre-controlled institution.

For the moment, the bulldozer has been stopped in its tracks.

—With inputs from Vrinda Agarwal and Sumit Saxena