Above: A patient after surgery at a hospital in Chhattisgarh. Lack of doctors and nurses is hampering the NRHM in the state (Representative image)/Photo: UNI

It is in this backdrop that the report by the Comptroller and Auditor General (CAG) on the National Rural Health Mission (NRHM) was recently presented in the assembly. The report said extremely bleak things about the state of healthcare in Chhattisgarh. There is an 89 percent shortage of specialists which means that there are only about a dozen specialists in the state health services. And despite the flourishing of new private nursing colleges and an attractive starting salary of Rs 40,000 being offered by the government, there is a 34 percent shor­tage of nurses against the sanctioned strength.

And that is the case where doctors are not available. However, the scenario isn’t very different even when they are available. The awful shortage of drugs, miserable lab services and poor diagnostic back-up ensure that. The CAG, which sampled the district hospitals/Community Health Centres (CHC)/Primary Health Centres (PHC), where doctors were available, found that patients were still deprived of necessary treatments for various illnesses as well as diagnostic services due to shortages of medical equipment (25 percent to 69 percent), drugs and consumables (40 percent to 76 percent) and laboratory services (36 percent to 71 percent).

Bland percentages, however, do not reveal the extent of damage that has been caused to the entire system. Niharika Barik Singh, who recently took over as the health secretary, confessed that the shortage of doctors is the department’s biggest headache: “We can still get medicines, equipment and support staff, but where do you get the doctors to serve in the rural areas? It is a universal problem across India that doctors do not want to serve in the villages anymore.” State Health Minister TS Singhdeo has been quoted as saying that the government cannot match the salaries being offered in the private sector and, therefore, there seems no end to the specialist crisis.

The benefits of NRHM have also not been scooped up in other areas. The infrastructure for the CHCs should have been completed by now, but as many as 54 out of the 223 CHCs planned across the state have not even been completed as yet. Similarly, 99 out of 884 PHCs have not been completed despite the work order being issued long back.

“In some cases, we have been handicapped by non-participation of bidders, in remote areas of Bastar and Sarguja,” says Singh. But she still has to find out how Rs 14 crore of public money was spent on these projects by the previous Raman Singh government with no completion in sight.

The health department has managed to establish a bulk of CHCs as First Referral Units (FRUs) as promised under NRHM. The state government had set the target at 46 FRUs, but it has only been able to get 28 on the ground.

A major failure has been the Chhattisgarh Medical Services Corporation. It was established on the lines of similar sourcing corporations like Laghu Udyog Nigam and Beverages Corporation to act as the one-point sourcing unit for all drugs and equipment. However, it failed to supply drugs and equipment despite receiving indents from the department, on the grounds of non-availability of rate contract for medicines, non-receipt of tenders, and late receipt of annual demands from the Directorate of Health Services.

Compare the CAG report, which has damned the government under the previous chief minister, Raman Singh, with its overall perception of the NRHM and its sub-programme on Reproductive and Child Health (RCH). It estimates that financial mismanagement is rampant across India. The report highlights substantial unspent balances with the State Health Societies every year. In 27 states, the unspent amount increased from Rs 7,375 crore in 2011-12 to Rs 9,509 crore in 2015-16. Delays were also noted in the transfer of funds from state treasuries to State Health Societies, ranging from 50 to 271 days. Similar problems of incomplete physical infrastructure, non-availability of human resources, medical equipment and medicines, and abysmal quality of healthcare and post- natal care abound all around. 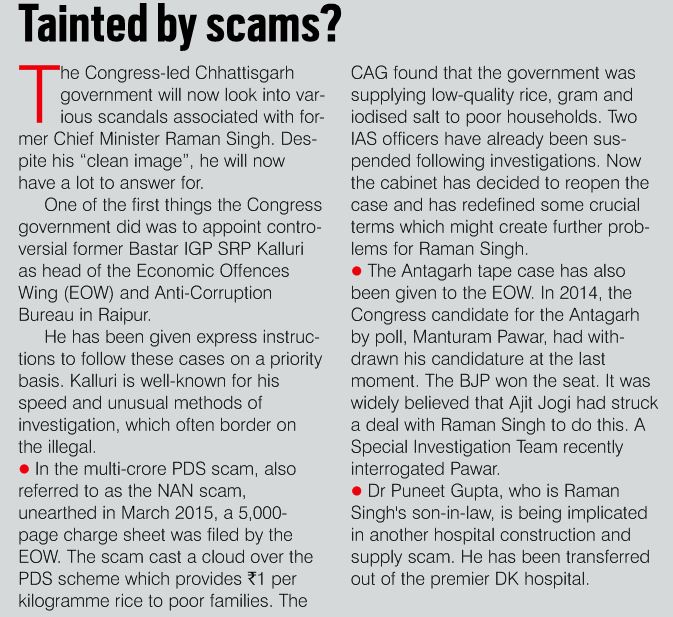 In the years under scrutiny of the CAG—2012-17—the state has spent an average of Rs 3,000 crore on its health budget. The last budget presented by Raman Singh had allocated about Rs 3,600 crore for health services. He had also allocated another Rs 980 crore for NRHM for building 25 new CHCs which have yet to see the light of day.

The unspent money each year appears to have been diverted into fancier schemes like Mukhyamantri Swasthya Bima Yojana (MSBY) which was a precursor to Modicare. Under MSBY, BPL patients would get a free card entitling them to an expenditure of up to Rs 50,000, up from Rs 30,000 previously. But soon it turned into a scam with private hospitals overcharging patients and treating them only if they had a card. In most cases, the hospitals charged them on the card as well as in cash. Eventually, it ended with the state’s inability to pay card bills with private hospitals going on strike and dishonouring the MSBY card.

The new set-up under Singhdeo will have to look into not only the mismanagement of NRHM funds but of the entire health department funds.

It will probably begin with DK Hospital where Dr Puneet Gupta was the superintendent. He has been accused of having swindled crores of rupees in reconstruction and re-equipping. But, as Barik Singh says: “It’s not an easy department to handle for any government, and every day, crises ranging from malaria to diarrhoea usually sap the state’s energies.”

We will have to wait and see if the Congress government fares any better in implementing the NRHM.