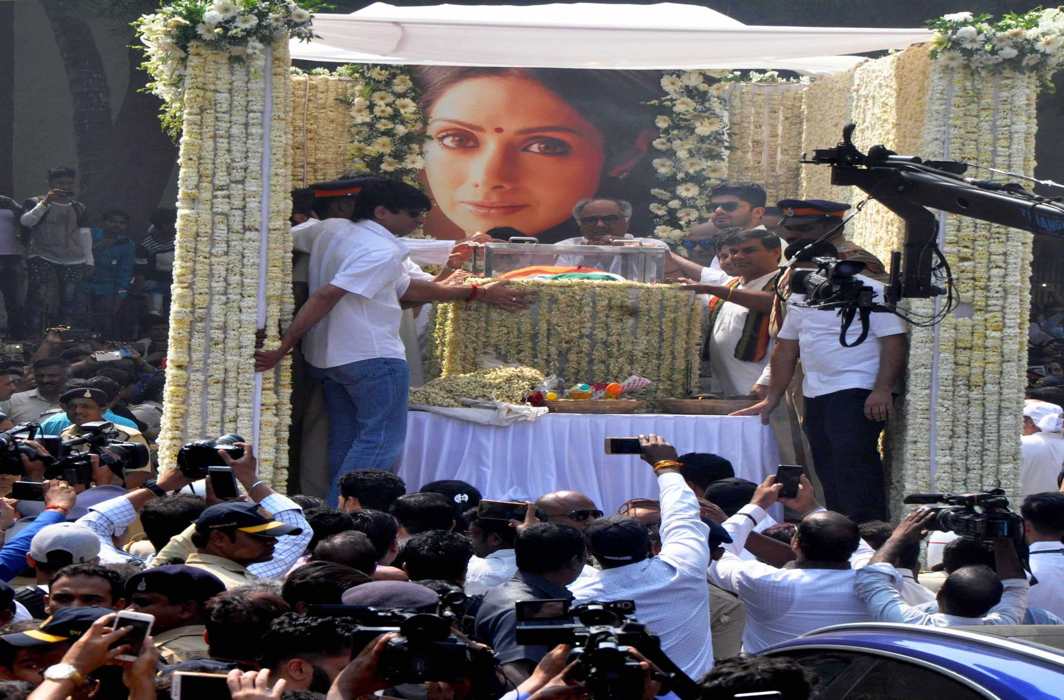 Above: Sridevi on her last journey in Mumbai/Photo: UNI

Sridevi’s demise has brought into focus the sheer hysteria, conjecture and professional illogicality of the Indian media and is a cruel travesty of facts

~By Bikram Vohra in Dubai

There are three tragedies in the death of Sridevi. All three are intertwined and yet, distinctly separate. The first is the loss of a fine actress and person at a young age in what can only be called unfortunate circumstances. No one deserves to die alone in a bathtub in an impersonal hotel room in another country, whatever the developments that led to the porcelain casket.

Apart from this was the swift spread of the report that she had suffered a cardiac arrest. The news of this medical condition, which is entirely different from a heart attack, was picked up globally and the media ran with it without finding anyone to whom it could be attributed.

The media’s failure to check its initial facts set the tone for a feeding frenzy by Indian TV and websites that defied all professional logic. It has to be said that legally, the scene of her death was so wildly contaminated by innuendo and speculation that by Day 2, there wasn’t even a shred of fact out there on the ether.

The media conduct was tragic and ghoulish in the extreme. The public had to come to terms with gross misconduct, misreporting and conjecture fuelled by volunteers from law, medicine and other career groups, each offering opinion on hastily organised panels with TV anchors faking empathy and then showing a cold-blooded absence of sentiment as they dredged for anything salacious to run with. It was all cringe-worthy and the incredible part is, it intensified with each passing hour as flights of fancy gained altitude.

The third tragedy was the disappointment reflected by the media and through it the people per se when the Dubai police cleared the body and stated there was no evidence of foul play. It was almost as if a child’s favourite toy had been snatched away and the media in India sulked visibly. In seconds, the tack changed and now it was all a matter of “unanswered questions”. Couched in faux piety, anchors began flinging clods of doubt on the timeline and the series of events that led to the star being discovered in her bathtub.

For the Dubai police and investigating agencies, none of this furore mattered and they went about their probe as they always do. In India, we have a VIP syndrome that kicks in and with Bollywood power in top gear and political bigwigs like Amar Singh on the inside track, the “cardiac arrest” would likely have stuck and no one would have even thought of questioning it.

But in the UAE, the police are not intimidated by VIP status and no one interferes in an ongoing investigation. So they followed their little book of rules and went about ticking boxes. At no stage did they indicate anything but procedure. The decision to interpret every little morsel of information coming out was entirely by the media for the media in India. Tyranny by TRP was the operative sentiment. Indeed, all the unanswered questions were posed by the Fourth Estate and spread by them across airwaves and print.

It was political bigwig Amar Singh who said she does not drink. Ergo, how come there was alcohol in her system? His statement caused the confusion. Someone spread the report she was on hydroxyl drug regimens to keep her weight down. A husband trying to “surprise” his wife by fetching up on a flight was made sinister by innuendo. Take it further. That Boney had spoken to his wife for 15 minutes. A stranger had been calling her repeatedly that day. She was being threatened.

In fact, the only attributable statement was Ram Gopal Verma’s ill-timed exposure of the poor little rich girl’s unhappy life and smacked of opportunism. Who said all this, where did these snippets of data come from? Subramanian Swamy took it to a whole new level by alleging that Sridevi was in fact murdered.

If the Dubai authorities had found anything untoward, they would have taken swift action. But they found nothing for them to pursue further. What did media want them to do…cook up a story? Accidents do happen and bizarre as they might be, if there is no indication of foul play that closes the case.

The official tweet from the Indian Consulate said: “The decision to release the body came after all the investigations and procedural matters followed in such incidents were completed, in order to determine all its circumstances and ensure that justice was done within the framework of the law.”

If the Indian government is satisfied, why isn’t the media? Has the tame ending ruined its story?

Step back a bit. No one was eyewitness to any of the events that are now being drenched in suspicion. Who can be quoted on Sridevi having been confined to her room for three days? No one. That she was in the bathroom for an inordinate period of time before the medics came? No one. That she was inebriated? No one. That Boney Kapoor called a friend instead of the hotel and took hours to contact the police? Nobody has taken the “credit” for any of these aspects. They just blew in the wind and assumed their own monstrous shapes.

But the more vociferous sections of media do not allow for this tame an ending. So now, the circus can truly begin with demands to the ministry of external affairs to ask Dubai for a full report being on the front burner. It would be safe to assume that Dubai would not hesitate to hand over any relevant documentation that is not an invasion of privacy. But ask for it first before leaping to absurd conclusions based on conjecture.

In the interim, there is a need for the media to introspect. The flaw in the way this loss has gone from heartbreak to cruel travesty is courtesy the very same media and professionals who

have no problem in giving their opinions on everything and adding to the din despite being totally ignorant of what transpired.