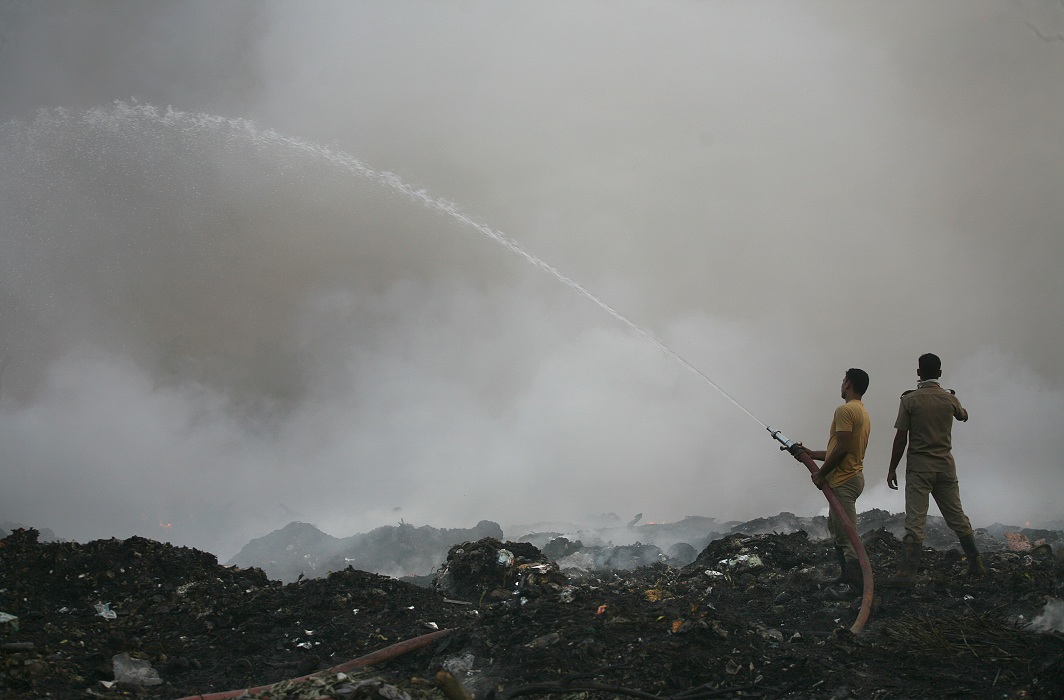 Above: Fire-fighters dousing flames at a dumping ground in Ghaziabad/Photo: Anil Shakya

In a novel and stern order, the Supreme Court has said that government agencies and officials who have connived with polluters should be brought to book and prosecuted either with fines or jail terms

We have all heard of the concept that polluters must pay, an idea that the world has accepted. But in a landmark judgment in India, the Supreme Court has said that government agencies and officials who do not take action against polluters will also have to cough up fines or even go to jail.

A bench of Justices Madan B Lokur and Deepak Gupta said erring officials who connived with polluters should be brought to book and prosecuted under Section 15 of the Environment Protection Act (EPA) that would invite a jail term of up to five years. Under this Act, defaulting government agencies would be liable to pay fines up to Rs 1 lakh. It could also slap fines of Rs 5,000 a day on erring officials or government agencies.

The stern directive arrived on a day when the air quality in the capital had again plummeted to “very poor” category. Significantly, the Court has, for the first time, brought government officials and agencies on the same footing as polluters by allowing for their prosecution.

With this direction, the Court has shown that it is no more ready to tolerate a lackadaisical attitude among officials, who in numerous cases that deal with environmental damage, have not followed court orders. Judges at the National Green Tribunal have time and again found that officials have not bothered to even find out the information it asked for.

Ravi Agarwal, Director, Toxics Link, told India Legal: “The fact that the Court had to step in with such a direction clearly shows that we are in the midst of a crisis. It is indicative of how governance has broken down. It is good that the Court did what it did as it now puts accountability where it should and officials will do what they are supposed to be doing.”

The Court permitted and empowered the Central Pollution Control Board (CPCB) to initiate prosecution after advocate Aparajita Singh, who was amicus curiae, pleaded that the erring agencies and officials be brought under the ambit of Section 15 of the EPA so that the Board could discharge its duty according to laid down laws. Appearing for the CPCB, Additional Solicitor General ANS Nadkarni said that the Board had issued showcause notices to some nodal agencies and officials to indicate that criminal prosecution against them would be initiated.

The directions of the Court were welcomed by the Centre for Science and Environment(CSE), a Delhi-based organisation, which was actively involved in documenting and helping the government formulate policies to fight pollution. In its numerous campaigns, it has repeatedly said that laws are just not enough as what is crucial is implementation.

Chandra Bhushan, deputy director of CSE, told India Legal: “What the Court did was just to reiterate the law. The law cannot differentiate between the private and public sector and both can be prosecuted for breaking it or not doing what they are mandated to do. Even if the Delhi municipality lets out untreated water into a river, it will be prosecuted. It cannot now hide behind the fact that it is a part of the government.”

The CPCB told the Court that it had followed its earlier directions and created Twitter and Facebook accounts so that the public could lodge complaints about pollution. It said it had received 749 complaints from the National Capital Region in the first 22 days of November. It had taken action on 500 of these complaints, it said.

The Court asked the Board to initiate prosecution against officials who had not acted on the remaining 249 complaints. “Why do not you prosecute these officials? You should prosecute them. Let these people realise what they have done,” the bench told Nadkarni.

Though the Environment Pollution (Prevention and Control) Authority, constituted over 20 years ago, was vested with powers to file criminal complaints against polluters under Section 19 of the Environment Protection Act, 1986, it never did so. This just proves that laws are not the answer. Implementation is the key.

Vivek Chattopadhyay, senior programme manager, Clean Air Programme, CSE, said: “The Supreme Court has set a higher benchmark for enforcement. Observations by it indicate that even local agencies such as municipalities can be made legally accountable for not taking action on a complaint. The Court has given a stern message to the authorities to take the deterioration in the city’s air quality seriously. The mediocrity and non-accountability on complaints is often blamed for many instances of violation, including garbage burning, polluting industrial units or vehicles which spew toxic fumes. No action against polluters frustrates people.”

Chattopadhyay added: “Apps and social media handles have become a popular grievance reporting system. This has made it transparent to find out whether action has been taken on a complaint. Inaction can no longer be hidden.”

An affidavit filed by the CPCB said that an efficient mechanism for resolving the complaints through social media could be ensured if nodal agencies followed such accounts of the Board. It told the Court that in order to prioritise action on complaints received through social media, it has started attending to them by sending field teams to locations where there were allegations of pollution.

An analysis of complaints during a clean air campaign revealed that the highest number of air pollution incidents was related to construction and demolition activities. It was followed by burning of waste, road dust, unpaved areas and roads, traffic congestion and industrial emissions.

It is little wonder that the NCR was recently gripped by an environmental emergency. It led to knee-jerk reactions. The government banned the entry of trucks into the capital. This led to massive traffic jams as trucks were parked along roads outside the city limits clogging them. The Delhi government was even toying with the idea of re-introducing the odd-even scheme where only oddor even-numbered cars would be allowed on a particular day.

There was also a Supreme Court order allowing only green crackers during Diwali, but no one knew what it meant. Timings to light crackers were limited to two hours. The police was told that it would be responsible for enforcing the directions of the Court. Of course, the order was blatantly violated as one could hear crackers bursting till 6 am the morning after Diwali. The police looked the other way. Only a minuscule percentage of violators was booked. However, the situation will be different next year as the police can be prosecuted, according to the direction of the apex court.

An online survey among 7,558 Delhiites by Local Circles, a social engagement platform, found that 35 percent of the capital’s residents wanted to shift to cities with cleaner air. They said they were not happy with the steps taken to tackle pollution. Many said they were planning to get air purifiers and masks. Thirty percent of the participants said they had a relative who had consulted a doctor for pollution-related health issues.

A recent report of the World Health Organisation said that at least 60,987 children in India under the age of five had died due to causes linked to air pollution in 2016. Soon after, in November, another report from the United Nations Environment Programme (UNEP) that examined science-based solutions to air pollution in Asia, underlined the role of India’s Supreme Court in tackling pollution. “The impetus for regulatory change sometimes comes from institutions outside government agencies,” the report said, citing court orders such as the one that shifted Delhi’s entire public transport fleet onto compressed natural gas. It also mentioned other Indian laws such as the Air Prevention and Control of Pollution Act, 1981, Motor Vehicles Bill of 1988, Auto Fuel Policy of 2002, National Environment Policy of 2006 and the National Green Tribunal Bill of 2009.

The government’s target is to reduce pollution by 20 to 30 percent. Will this direction by the top court help?  One just hopes it will as we all have a right to breathe air sans poison.