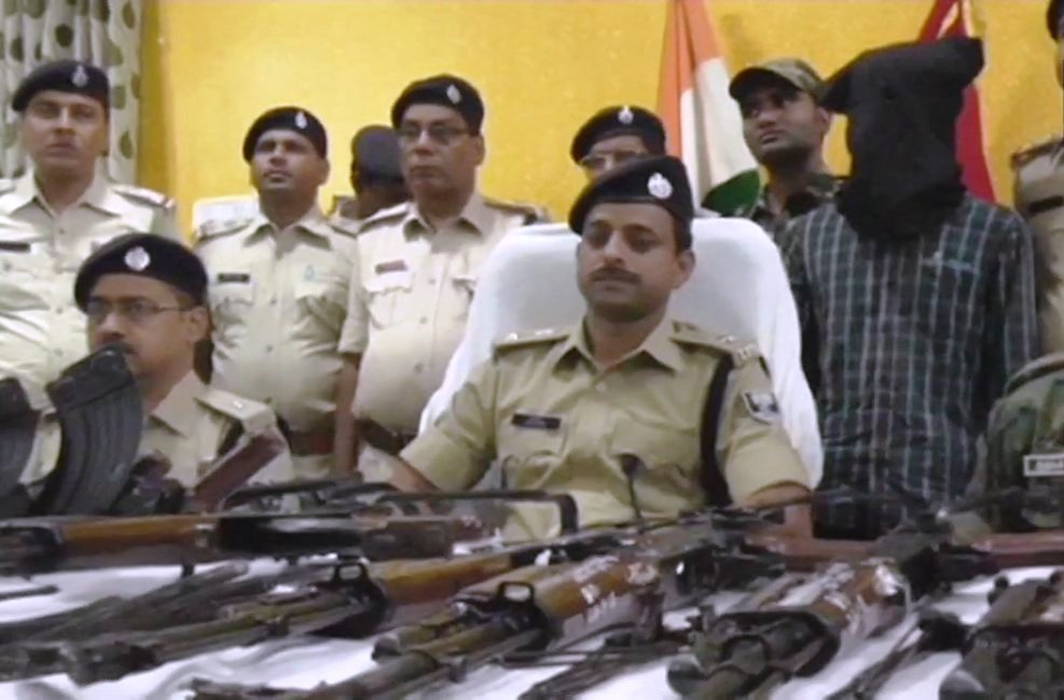 Above: Bihar and MP police have raided many villages in Munger/Photo: Twitter

The shocking recovery of 45 AK-47s from Munger district has revealed that smuggling of arms is a thriving trade and that unemployed, skilled labourers are being roped in by arms smugglers

~By Niraj Sahai in Munger

On August 29, the Bihar police recovered three AK-47 assault rifles from Jamalpur locality in Munger district. Investigations revealed that the rifles, recovered from one Mohammed Imran, a resident of Munger’s Bardah village, were smuggled out of the Central Ordnance Depot in Jabalpur, Madhya Pradesh, and were part of at least 70 such weapons that had been siphoned off from the depot.

So far, over 45 of these rifles have been recovered from different villages in Munger during continuing raids by the Bihar and MP police. On September 29, the police found 12 AK-47s inside a well in a field in Bardah village. Later, a few more AK-47s were recovered from the same village along with some 100 gun spare parts. This led the police to believe that several rifles may have been dismantled by the smugglers to sell the parts in the black market. So far, the Bihar police has arrested 11 people in connection with the case, while the MP police has arrested two.

“Out of about 70 AK-47s missing from Jabalpur depot, 55 have been identified so far, some through the spare parts found around Munger. The rifles were brought to Munger with the help of Purushottam Lal Rajak and Suresh Thakur, former and current employees of the Jabalpur ordnance depot, respectively. Both have been arrested and we have been interrogating them,” Munger SP Babu Ram told India Legal.

The investigation into the Munger arms haul has now been transferred to the National Investigating Agency (NIA) amid reports that several of these rifles have already made their way to Malda in West Bengal. The police also fears that some of these weapons may even have been sold to Naxals.

The Bihar police believes that the heat from the continuing raids is forcing the perpetrators to flee to Malda which is notorious for illicit activities. In fact, during a raid on an illegal arms manufacturing hub that was busted in Malda on October 7, about 24 improvised revolvers and 200 semi-finished firearms were seized. This led to the arrest of two locals belonging to Munger district. Even during an earlier raid in Malda in June, nine residents of Munger were arrested. All of them told the police that they used to be employed in Munger’s legal gun manufacturing units and were brought to Malda on contract to make arms. 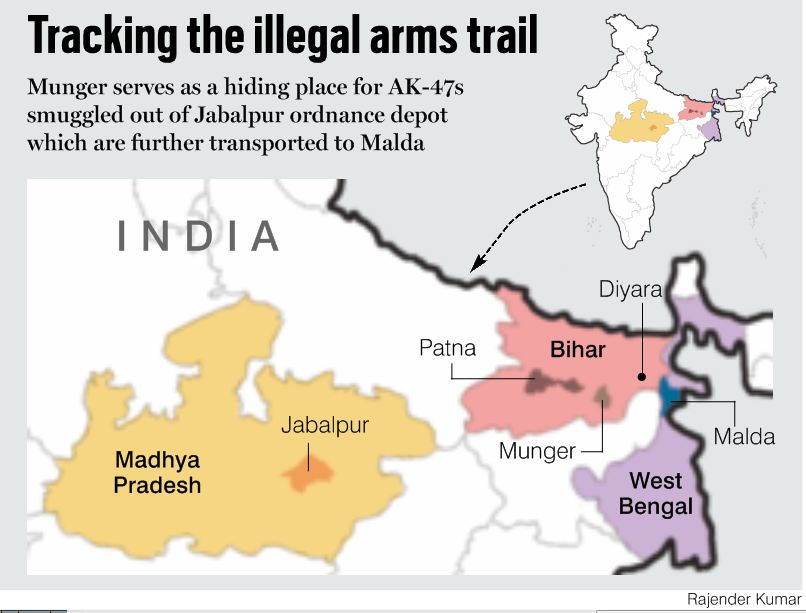 Ironically, Munger is an ancient city on the southern banks of the Ganges, 200 km away from Patna. Like the rest of Bihar, Munger is not new to the gun culture. Locals had a sense of pride in the guns they freely wielded. A majority of them were not just legally obtained, but produced by private gun manufacturing companies which had been operating legally for decades. But the sudden spate of recoveries of smuggled weapons across the district has come as a jolt, not just for investigating agencies, but also for the locals of Munger.

Sitting in his gun shop in Chowk Bazaar, Thakur Naresh Singh, 78, intermittently gazes at the busy road outside. “No customers now,” he told India Legal. Recalling the not so distant past, he said that “people used to make a beeline to gun shops to buy licensed ‘Made in Munger’ firearms”. Over the past few years, he says, business has dried up. “Now I sell just two or three guns in a year,” he claimed.

However, the scene at legally run private gun shops in Munger is in stark contrast to happenings in villages that are just a few kilometres away. Hamlets under the Muffasil and Kasim Bazaar police stations now have a thriving illegal arms business. In villages like Churamba, Bardah, Naya Gaon, Taufir Diyara and Maskatpur, illegal arms assembling units that make kattas (country revolvers) and crude rifles are proliferating.

Singh blamed a slew of factors for the increasing preference for illegal arms over readily available legal arms. “Stringent rules for securing arms licences, rising costs of these weapons and their spare parts, harassment by cops, demonetisation, GST—all have hit our trade,” he said. Singh’s shop is one of the oldest gun shops in Munger. In fact, many localities in the district are named after weapons and their spare parts—Chuabagh (colloquially, chua is the wood used to make the butt of a rifle), Belan Bazaar (belan is the device used to stuff gunpowder in traditional muskets and shotguns), for example.

Those involved in the legal gun trade recall how Munger emerged as a hub for manufacturing weapons. Vipin Kumar Sharma, owner of M/s Girilal & Company, a private gun-making factory, told India Legal: “The association of Munger with weapons goes back to the reign of Mir Quasim Ali, the Nawab of Bengal between 1760 and 1764. He had shifted his capital here from Murshidabad (Bengal) in the last year of his rule and raised a private army and built gun houses with the help of gunsmiths from places as far away as modern-day Afghanistan. The soil of Munger has traditionally been rich in potassium nitrate (a key ingredient in explosives) and the gunsmiths knew how to harness it for making gunpowder.”

By the time Ali’s rule ended, Munger had gained expertise in gun-making and explosives manufacturing. This helped locals turn the trade into a cottage industry. The trade grew through the centuries and those without a predilection for more sophisticated imported rifles came to Munger to buy firearms. Few know that the .410 bore single barrel musket rifle, used widely by the Indian army during the India-China war in 1962, was manufactured in Munger’s gun factories.

Of the 105 arms licences issued by the central government during the early years of Independence, 37 were granted to private citizens in Munger alone. “Following the 1962 war, the state government decided that the privately owned gun manufacturing units scattered across Munger should be moved to one area in a bid to ensure security and better monitoring. The units were first shifted to the Jail Compound area and then to the Functional Industrial Estate located within the historic Munger Fort,” Sharma recalled.

Strangely, along with privately owned gun manufacturing units, the district’s other landmark—the Munger School of Yoga—also operates from the Munger Fort. The­se units are spread across 10 acres within the high walls of the fort complex and first-time visitors may miss them as there is no signage indicating their presence.

The gun factories still produce double barrel breech loading (DBBL) guns and single barrel breech loading (SBBL) guns. But, in the face of stringent rules for buying these guns, coupled with rising costs of ammunition and an unabated shadow market for procuring unlicensed firearms, these factories are fast losing their clientele. While the 37 licensed factories had a combined annual manufacturing quota of 12,352 guns in 1958, today just about 2,000 DBBL and SBBL guns are manufactured here. Saurabh Nidhi, owner of Pfizer gun manufacturing company, told India Legal: “Of the 37 licensed gun manufacturing units, eight have stopped production. Two units, the Munger Gun Manufacturing Cooperative Society and M/s Das & Company, have shut down completely in the last three years.”

The labour force at these units has, predictably, been the first casualty of decreasing profits. The 37 gun factories collectively had over 2,000 labourers; today, they have just about 100. Nidhi said: “To make one gun, the skills of nine people are involved. Naturally, with customers dumping Munger guns in favour of smuggled arms, the demand for our firearms has steeply declined. This has led all manufacturing units to scale down production. As a result, the workforce has been forced out of jobs.” As if losing their jobs wasn’t enough, the labourers now have to cope with suspicious cops. Investigators believe that those involved in the AK-47 smuggling racket could have roped in jobless employees of Munger’s gun factories by offering them steady income.

Nagendra Sharma, 46, a representative of the Munger Gun Factory Workers Union, was only 11 years old when he started accompanying his father to work in an arms unit. After having spent 35 years working in gun manufacturing units, Sharma is now without a job. “Gun factories have cut down production as demand has dried up and I, like hundreds of other workers, have lost my job. For the first time in my life, I don’t know how to provide for my family. The only craft I know is gun manufacturing,” Sharma told India Legal.

With a family of six, Sharma now picks up menial jobs and earns about Rs 3,000 a month. “At the gun factories, I could earn up to Rs 12,000 per month and even more when the demand was high. Most of my co-workers also lost their jobs and are facing the same crisis or worse. Many are plying rickshaws, working as contract labourers with local builders or as security guards,” he said.

The past few months have made life worse for the unemployed workers. “Whenever any illegal arms or their spare parts are found in and around Munger, our labourers, whether unemployed or employed, are suspected of being part of the smuggling ring,” said Nidhi. “The irony is that Munger’s legal gun factories largely use manual turning machines, while illegal arms like AK-47 rifles or other sophisticated pistols are made using computerised numerically controlled (CNC) machines. Our workers aren’t trained in the CNC, but still remain the target of suspicion.”

Dr DN Gautam, former director-general of police, Bihar, believes that illegal arms manufacturing units had always coexisted in Munger along with legal units. He recalled that in February 1986, around 100 Czechoslovakia-made bullets of AK-47 caliber were recovered in Diyara area of Munger during a search operation. “Naturally, those bullets were not meant for DBBL or SBBL guns being produced in Munger’s legal gun units.” However, he agrees that the government remains clueless about how to tackle the menace.

“When unemployed skilled gunsmiths are readily available here, it is easy for illegal arms manufacturers and smugglers to poach them for illicit activities. The illegal industry provides a steady flow of money. The state needs to employ these workers within its police force. Doing so will hit the illegal gun market and help these people lead a life of dignity instead of being targeted as felons,” Gautam said.

While the NIA will investigate the present smuggling case, the need of the hour is for the central and state governments to look at the situation in Munger holistically and not just as another case of arms smuggling. Will they?