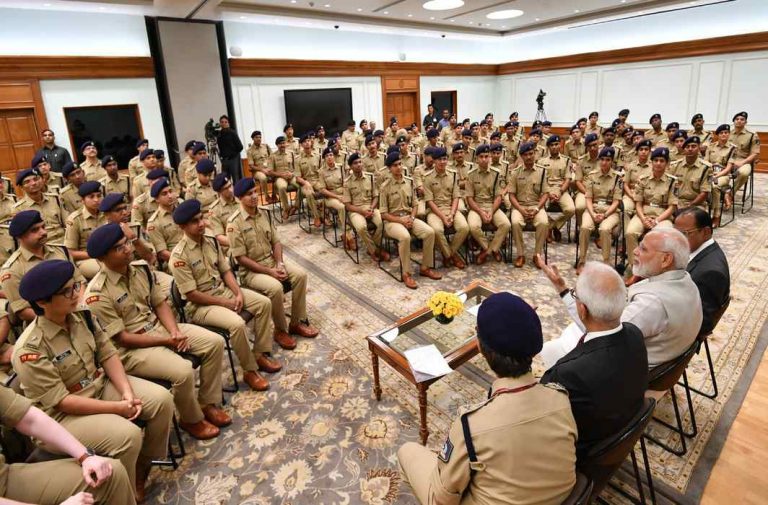 After tinkering with the IAS, the Modi government is eyeing the IPS with plans to drastically reduce the central quota by over 50 percent, a move that could lead to serious stagnation in the ranks

In the run-up to the Lok Sabha elections five years ago, Prime Minister Narendra Modi proclaimed “Minimum Government and Maximum Governance” as his motto in 2014. It’s a different matter that in his first five years, he has not lived up to that promise. The All India Services (AIS), which is the bulwark of governance, appear to be his favourite target. First, it was the Indian Administrative Service (IAS) and now it is the Indian Police Service (IPS). The latter is being targeted through a drastic decrease in the quota of central deputation of IPS officers.

IPS is an AIS, common to the Union and the states, constituted under Article 312 of the Constitution of India. IPS officers provide senior-level leadership to police forces/departments, both in the states and at the centre. The Union Ministry of Home Affairs (MHA) is responsible for cadre management of IPS and policy decisions, such as cadre structure, recruitment, training, allocation, confirmation, empanelment, deputation, pay and allowances and disciplinary matters. The IPS is organised in 26 state cadres, reviewed after every five years. As on January 1, 2019, the authorised strength of the IPS cadre stood at 4,982 with 1,075 of these eligible for central deputation.

As per the extant government policy, certain number of posts in different police and other organisations/departments of the central government in the rank of Superintendent of Police (SP) and above are filled by drawing IPS officers from various state cadres. The cardinal principle is that IPS officers who are so borrowed will serve the Central Police Organisations (CPOs) and other organisations/departments of the central government for a stipulated tenure on deputation and thereafter return to their parent cadres. The two-way movement of officers from the state to the centre and back is of mutual benefit to the states and the centre on the one hand and to the officers concerned on the other.

The IPS (cadre) Rules, 1954, provide for deputation of IPS officers under the central government or another state government or autonomous body wholly or substantially owned or controlled by these governments or an international organisation. Every state cadre of the service provides for a central deputation quota which, in turn, requires additional recruitment to be made to the service to supply trained and experienced members to serve in these posts.

Accordingly, utilisation of the central deputation quota of different state cadres is an important factor governing the scale on which officers are borrowed from the various state cadres of the service.

These well-established procedures would soon be turned topsy-turvy if a letter from the MHA to the chief secretaries of all states is any indication. Dated November 26, 2019, the MHA letter has unravelled a proposal to reduce the existing central deputation reserve quota from 40 percent of Senior Duty Posts i.e. 1,075 posts to about 500.

This is what the MHA letter has to say: “It has been noted that most of the state governments are not sparing their IPS officers to serve on central deputation. On going through the data of officers on central deputation throughout the country, it is observed that at present only 428 IPS officers are working in these posts against the authorised strength of 1,075 i.e. 39.81 percent of reserve posts. Resultantly, a large number of the posts remain unutilised.” Comments from all state governments and Union Territories on the proposal were sought by December 15.

Recent data released by MHA shows that there is just one officer each available for central deputation in the ranks of SP and Deputy Inspector General (DIG), as against 144 sanctioned posts and 75 vacancies at the DIG level, and 29 posts and 17 vacancies at the SP level. At the senior levels of Inspector General (IG), Additional Director General (ADG), Special Director General (SDG) and Director General (DG), there are fewer vacancies. Against the sanctioned strength of 78, there are nine IG vacancies, while in the ADG, SDG and DG ranks, there is just one vacancy each, which is often a result of routine retirements. The IG level has just two officers on the offer list, but the number of officers at the other senior levels is in reasonable proportion to the vacancies—at the ADG and DG levels, there are seven and five officers available, respectively, on the offer list.

The move to drastically reduce the central deputation quota by over 50 percent, if implemented, could have far-reaching consequences for the IPS, leading to serious stagnation in the ranks. This also goes against the all-In­dia character of the IPS and pooling of diverse experiences of working in various state/central agencies apart from serving in districts and divisions of their cadre states. This move also smacks of the Modi government’s attitude of indulging in “surgical strike” instead of diagnosing and understanding an issue and resolving it.

According to IPS sources, if a diagnostic study is done it would be revealed that the present crisis is largely due to the erratic recruitment policy followed by the earlier BJP-led government headed by Atal Bihari Vajpayee. The shortage at the middle levels is because between 1998 and 2006, recruitment to this service dropped to just 30-35 officers each year in place of 80 earlier. This led to a situation where there were too few officers at executive level and so states were not sparing them for the centre. This was corrected later and over 100 officers have been recruited for some recent batches. Now, when they get promoted, the shortfall will be overcome. This could happen in the next few years.

But if this hasty step of slashing the central deputation quota is carried out, there will be stagnation for these officers as they won’t have enough avenues for promotion.

It is not just central deputation. At the state level also, it is said that there is a huge shortage of police officers. In such a situation, states are not relieving them to go on deputation.

However, this is only part of the story. In actual fact, the present situation has been brought about by two factors. One, the drab and unattractive nature of most central deputation posts. Two, the top-heavy structure of the state police force wherein IPS officers can get promotions and postings for the asking—DG, ADG, IG, DIG et al, which leaves little incentive to move away to distant places on central deputation.

IPS officers on central deputation are generally deployed in the Central Armed Police Forces (CAPFs) like the Indo-Tibetan Border Police, Border Security Force, Central Reserve Police Force, Central Industrial Security Force, etc., and in CPOs like the Central Bureau of Investigation, National Investigation Agency and Intelligence Bureau, among others. There are 14 CPOs and CAPFs in India, but no more than 16 IPS officers are available on the “offer list” for central deputation at present, which is an all-time low. This may perhaps be due to the pitched battle going on between the CAPF cadre and IPS over the deputation of the latter as senior officers in the paramilitary forces. Recently, officers of the ITBP, BSF, CRPF and CISF ob­tai­ned a stay from the Delhi High Court on central deputation of IPS officers in these forces below the rank of IG.

On the other hand, in the states, the IPS has no such rivalry and there are several posts with perks and privileges no one would like to forgo. As far as the top-heavy nature of the IPS is concerned, Haryana is an example which, with minor variations, is applicable to all states. When the state was formed in November 1966, it had one IG, two Range DIGs and six district SPs with a few more in the supporting staff. Now it is: DGP–2, ADGP–6, IG–14, DIG–13 and SP–40. And there are 50 senior posts under central deputation, state deputation and training reserves.

There is another major reason why there is hesitation amongst IPS officers to go on central deputation—the huge difference in the rules for the promotion of IPS officers at the state and central levels. While the states promote officers quickly, the centre takes much longer. This basically means that for an officer to want to come to the centre, it should be at a lower rank, which is an in-built disincentive. This phenomenon is validated by the fact that while at the state level IPS officers from the 1994 batch have become ADGPs, at the central level the last batch to be empanelled at this level is that of 1989!

This deprivation in central deputation is not confined to the IPS only. It deeply afflicts the IAS also. According to the latest data of the Union Ministry of Personnel, only 153 IAS officers were appointed on central deputation under the central staffing scheme in 2018-19, the lowest in the last five years.

Instead of sorting out this severe malady with better cadre management and positive dialogue with states, the Modi government is bent on dismembering the AIS (IAS and IPS) by outsourcing and privatising governance. This could prove to be the death-knell of India’s federal polity and structure.