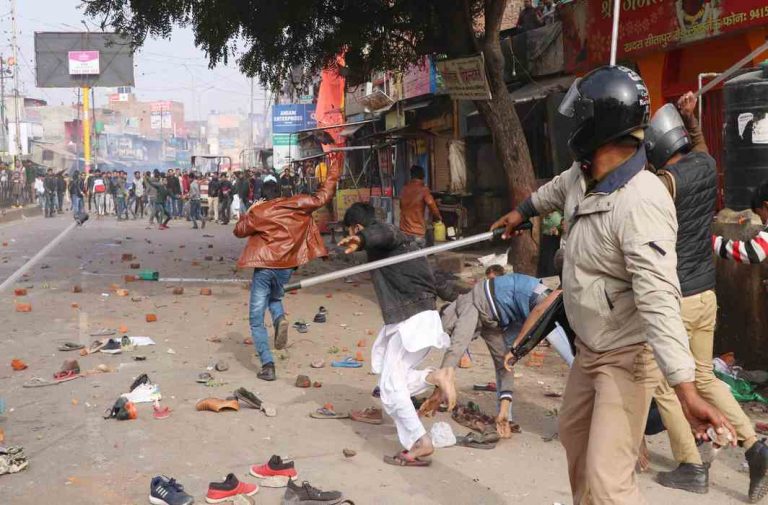 The UP police has cracked down on CAA protesters and mindlessly arrested all and sundry. Many have been charged with various sections of the IPC and asked to pay hefty penalties for rioting

Protesters against the Citizenship (Amendment) Act (CAA) in UP have seen the ugly and brutal face of the state police. The belligerence with which it attacked people has shocked and dismayed all. In some districts, the police inflicted lathi blows even on those found standing outside their houses or returning from work. At other places, the cops are alleged to have barged into homes and assaulted the inmates with a vengeance. Four people arrested in Muzaffarnagar were freed after 10 days with the police admitting that they had found no evidence linking them to the violence on December 20.

In doing what it did, the police snatched away a citizen’s democratic right to either protest or pray, as happened in the case of 55 Sikh devotees who were booked for taking out nagar kirtan (religious procession) to commemorate Martyrs’ Day of Guru Gobind Singh’s sons in Pilibhit.

Not only are demonstrations against the new citizenship law banned in the state, even writing against it on Twitter or Facebook can land one in jail. The violence that took place in Lucknow and other parts of the state on December 19 and 20 in protest against the police crackdown on Jamia Millia students in Delhi cannot be condoned.

A peaceful demonstration by civil society members in Lucknow, for instance, turned ugly when some unidentified elements torched vehicles, including OB vans belonging to some media houses. Some set fire to a police outpost in Khadra area. In some 21 districts, vandals hijacked the protest from peaceful, civil society demonstrators, leading to 19 deaths and causing damage to private and public property. These included Lucknow, Kanpur, Rampur, Gorakhpur and Meerut. Internet services in all the affected districts remained snapped for several days.

Over 1,000 people have been arrested for their alleged involvement in the violence, although many were just silent protesters. Prominent among those arrested in Lucknow include retired IPS officer SR Darapuri (a 77-year-old cancer patient), Congress worker and social activist Sadaf Jafar (a mother of two), and activist Deepak Kabir. Social activists Arundhati Dhuru and Madhvi Kuckreja were detained when they went to enquire about some of the detainees. Although the above three were not involved in the violence, a look at the charges levelled against them shows the extent to which the police went in order to crush democratic rights.

On December 19, Darapuri was put under house arrest in Lucknow to prevent him from reaching the protest venue and later arrested. He was charged under Sections 147, 148, 149 (rioting, armed with a deadly weapon or anything which if used as a weapon may cause death), 152 (obstructing public servant when suppressing riot), 307 (attempt to murder), 323 (voluntarily causing hurt), 504, 506 (intentional insult, provoking someone to disturb public peace), 332 (voluntarily causing hurt), 353 (assaulting public servant to deter from discharge of duty), 188 (disobeying order promulgated by public servant), 436 (mischief by fire or explosive substance), 120-B (criminal conspiracy to commit an offence punishable with death and 427 (causing mischief to damage property of Rs 50 and above) of the IPC.

The manner in which the police stooped to send Darapuri to jail shows that his basic human rights were also violated with impunity. According to Magsaysay Award winner Sandeep Pandey, Darapuri, who is also a Dalit rights activist, was produced before a magistrate who refused to order his imprisonment. Another magistrate then ordered him to be jailed. Deepak Kabir was arrested when he went to enquire about Sadaf Jafar’s whereabouts. Advocate Mohammad Shoaib, also a septuagenarian, was put behind bars without being produced before a magistrate, Pandey said.

Most of the IPC sections invoked against Darapuri have also been used against Sadaf Jafar, but she faces additional charges under Sections 3 and 4 of the Prevention of Destruction of Public Property Act of 1984 and Section 7 of the Criminal Law Amendment Act of 1932. Pandey was also detained for protesting outside his house, but as he did not carry a mobile, the police couldn’t find any evidence to frame him and set him free.

The extent of police high-handedness can be gauged from the arrest of four men in Meerut, where the SP is alleged to have told Muslim protesters to go to Pakistan. One of the four men, a government clerk, was jailed even though he was in office on the day of the rioting. The other three were taking their ailing relatives to hospital when they were arrested. All four remained in jail for 11 days and were released only after their family members proved their innocence.

While the police are now serving notices on protesters/rioters and collecting hefty penalties from protesters for damaging property, they obviously have no moral obligation to pay compensation for causing mental trauma to those wrongly jailed and their families. Show-cause notices have been served to around 150 protesters in Lucknow alone. Identified from CCTV and video footage, they have been asked to explain within a week why their properties should not be attached for damaging public property.

Unlike their Delhi counterparts who have approached the High Court for the appointment of a claims commissioner to assess the damage to properties due to the CAA protests, the UP police have estimated the losses on their own. Without any legal backing, the administration has sought recovery of an estimated Rs 4 crore from the accused in Lucknow alone.

Like the Meerut police’s “mistake” of sending innocents to jail, many other accused across the state face the challenge of proving their non-involvement in the violence. In Firozabad, show-cause notices have been sent to 26 persons. Families of some of them have pleaded innocence. These accused are already in jail and chances of their coming out seem remote as they are too poor to pay up.

The police are reluctant to admit that some of the 20 killed in violence were victims of police firing. Director-General of Police of UP OP Singh repeatedly denied that the police fired on the protesters until a video surfaced of a policeman aiming his gun to fire at a mob in Kanpur’s Yateemkhana area. Kanpur SSP Anant Deo later clarified that the police fired four rounds in the air in self-defence. He insisted that no one had died of shots fired by policemen. Regarding three deaths due to bullet injuries, he said that only forensic examination would confirm if the shots were fired by policemen.

Meanwhile, in Bijnor, the police admitted that a youth died when they resorted to firing. Like the Kanpur SSP, Bijnor SP (Rural) Vishwajit Srivastava reportedly said that a 23-year-old man died when a policeman fired at a violent mob in self-defence.

Bungling by the police took a curious turn in the case of Sheroz, a 23-year-old who died of bullet injuries in Shamli on December 20. While no one has been named as an accused, the FIR mentions Section 304, IPC (culpable homicide), and not 302 (murder). Although a post-mortem examination was carried out on Sheroz’s body, his family had not been given the report till January 1 night.

The police has now pinned the blame on the Popular Front of India (PFI), a Delhi-based organisation linked to SIMI and its political front, the Social Democratic Party of India, for masterminding and inciting the violence. Praveen Kumar, IG (Law and Order), said at a press conference that “25 persons affiliated with the PFI have been arrested across the state for their involvement in different criminal activities”.

The state government has also sent a report to the Union home ministry seeking a ban on the PFI. The report is based on PFI activities in the state over the last 10 years. The PFI reportedly started its activity around 2010 in Lucknow, Barabanki, Bahraich, Muzaffarnagar, Shamli and Meerut.

Waseem Ahmed, president of the outfit, and two of its members—Nadeem and Ashraf—have been arrested

for their role in the Lucknow protests on December 19. Six PFI members, including the organisation’s founder-member of western UP, Maulana Shadab, are said to have been arrested from Shamli. The police claimed to have recovered pamphlets with objectionable content from them. In Meerut, two PFI members, Amzad and Javed, have been arrested.

The police are invoking a 2011 High Court order which directed the government to make vandals compensate the destruction of property. Ironically, the government had a memory loss when a Hindu mob led by Bajrang Dal activists damaged property and killed police Inspector Subodh Kumar Singh in Bulandshahr over alleged cow slaughter in 2018. The IT cell of the UP police proved its bias when it took days to track down one of the accused who kept sending messages through a cell phone.

Clearly, UP is under police rule and not of an elected government. And so far, there is no indication that they will be questioned for their atrocities.