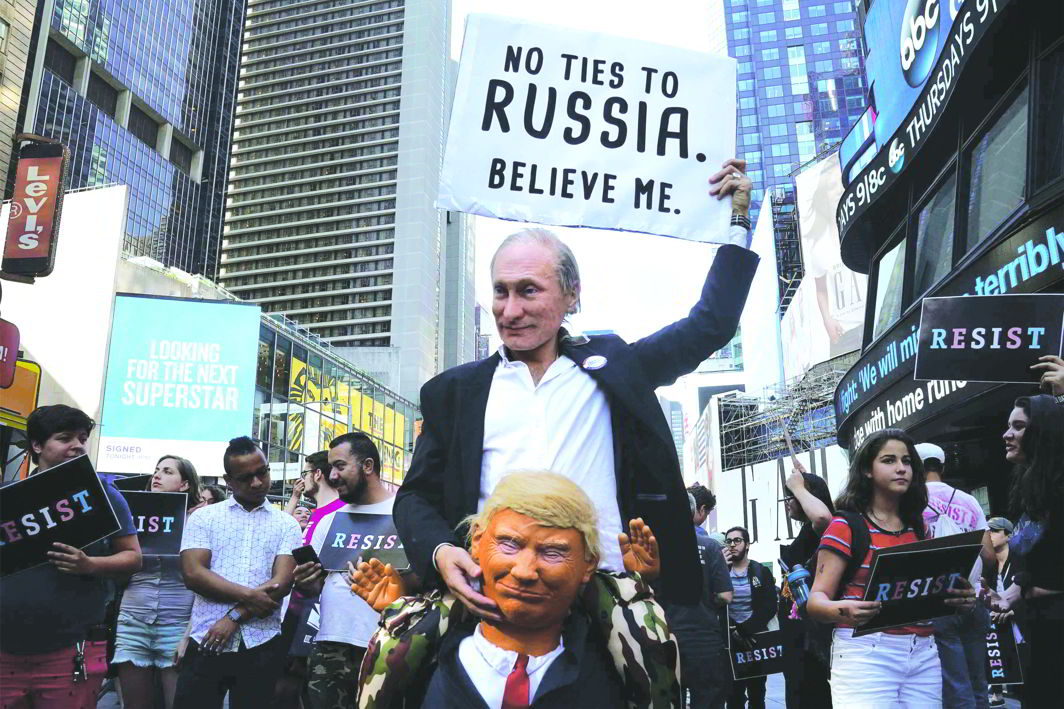 In biology, the double helix describes how a DNA molecule consists of two strands that wind around each other like a twisted ladder. Special prosecutor Robert Mueller has presented a double helix approach with the first indictment  and first guilty plea in the investigation of Russian influence in the 2016 American election.

While the president’s name does not appear in the indictment documents there is much to cause concern for him, his family and many of his associates. The indictment of Paul Manafort, the campaign manager, and the government request for 10,000,000 USD bail for money laundering received all the initial attention in American media this past week. This is mostly because the documentation of the offences mirrors the sort of information that would be used against the Trump Organisation for money laundering in real estate transactions.

THE LOGICAL NEXT STEP

In America, a prosecutor first presents his case to a Grand Jury comprising 18 people to substantiate bringing in a criminal indictment. If the Grand Jury agrees, the charges lead to a trial usually with a “petit” jury, 12 people listening in court and deciding guilt or innocence. The judge presides, acts as a referee between the defence and prosecution and decides the sentence when required.

The guilty plea entered by George Papadopolous, a foreign policy advisor, is the real breaking news headline. Arre­sted in late July, he pleaded guilty in early October, but Mueller’s team kept it a secret. So here we have a person confessing to colluding with Russian agents turning into a government witness in an effort to avoid long-term incarceration.

Initially, the White House claimed Papadopolous only lied to the FBI. What he lied about is the smoking gun of this case. The FBI wants him to feel abandoned by the administration so he will talk openly. Trump took the bait when he tweeted his disdain, calling Papadopoulos a “proven liar” who was a “young, low-level volunteer”.

Odd because in March at The Washington Post editorial board meeting, Trump outlined the members of his foreign policy team, describing Papadopolous as “an energy and oil consultant, excellent guy”.

The document revealing the guilty plea bargain says that he made “material false statements and material omissions” during an FBI interview on January 27. At the time, he claimed to the federal agents that in London an unnamed professor “told him about the Russians possessing ‘dirt’ on then-candidate Hillary Clinton in the form of ‘thousands of emails’. Multiple times Papadopolous claimed he learned that information prior to joining the campaign”.

Suspicious because the dates were not adding up, the FBI had probable cause to obtain warrants for his email and other communications data. It found copious emails detailing Papadopoulos’ efforts to coordinate an in-person meeting between senior Russian officials and high-level Trump campaign staffers that directly contradicted what he told them.

Scrutiny of Trump’s fondness for Vladimir Putin escalated after the GOP candidate urged the Russian government to hack Clinton’s emails in a July 2016 press conference. That did not dissuade Papadopoulos from continuing to try to organise such a meeting.

In February 16, Papadopoulos expressed eagerness to cooperate in a second interview with the FBI, this time with his counsel present. According to the statement of offence detailing the case, the very next day Papadopoulos deactivated a Facebook account he had maintained since 2005 that contained records of his communications regarding Russia. Several days later, on February 23, he stopped using his cell phone and bought a new number.

A look at the timeline that preceded the 2016 election

March 6: George Papadopoulos learns that he will be made an official foreign policy adviser to the Trump campaign. He also learns, from someone who is a “supervisor” in the campaign, that a focus of the Trump campaign is on an “improved relationship with Russia”.

March 31: Papadopoulos attends a “national security meeting” with Donald Trump and informs him that he has contacts to arrange a meeting between Trump and the Russian leadership.

April 26: Papadopoulos meets with a professor who tells him the Russian’s have “thousands of emails” containing “dirt” on Hillary Clinton that would be useful to the Trump campaign.

(June 3: Rob Goldstone emails Donald Trump Jr to inform him that the Russians have “dirt” on Hillary Clinton as part of a programme to help Trump.)

July 1: Papadopoulos emails a “High Ranking Official” in the campaign, and asks what to do about a potential trip to Russia. He’s referred back to the “Campaign Supervisor”. Campaign officials pass around a note saying they should send someone “low level” in the campaign so as “not to send any signal”.

August 15: After multiple emails to the campaign informing them that Moscow is open to a visit, and that he will make the trip “off the record” if that would be better, a “campaign supervisor” tells Papadopoulos “I would encourage you” along with another foreign policy adviser to the campaign “to make the trip if possible”.

(NOTE: Papadopoulos guilty plea supporting document goes out of the way to not name his campaign supervisor. His department head was Jeff Sessions, now the attorney general in charge of the Department of Justice.)

By taking the double helix approach to the indictments and the guilty plea, the special prosecutor has insured that the phrases “Trump campaign”, “Russia” and “disparaging information on Hillary Clinton” keep coming up. Mueller’s team is more politically savvy than many think; an added example is going after Paul Manafort for money laundering.

Manafort and his associate Richard Gates are also charged with conspiracy, and failing to register as agents for foreign governments. The low hanging fruit is the money laundering. This is a warning shot. The charges against Manafort are consistent with what the government could and would use against the Trump Organisation to show money laundering in real estate deals.

The Trump Organisation uses some 200 limited liability shell companies, a business approach frequently used to hide tax liability. The Manafort indictment accuses him of doing exactly this with revenue paid by pro-Russian Ukrainian and Eastern European clients for political consulting. The similarity is surely not lost on anyone.

It also serves to remind people that Manafort’s selection to run the campaign in the months before the convention seemed odd because he had been out of US politics for several years while involved with the Russian sphere in eastern Europe. Since the first claims by the US intelligence agencies of Russian involvement, Manafort’s Russian connections have been much discussed. Manafort worked for Trump for nothing. The money laundering indictment suggests how he could afford to do this.

After the FBI raided Trump’s home a few months ago, he said: “I thought it was a very, very strong signal, or whatever. I know Mr Manafort—I haven’t spoken to him in a long time, but I know him. He was with the campaign, as you know, for a very short period of time, relatively short period of time.”

He ran the campaign for nearly six months at a critical period. By their own admission, members of Team Trump credited Manafort for being “in charge” of Trump’s political operation, “leading” the campaign team.

Sean Hannity, a Trump media cheerleader at the time of the political convention, retweeted Newt Gingrich, another Trump cheerleader, that “nobody should underestimate how much Paul Manafort did to really help get this [Trump] campaign to where it is right now”.

When someone gets in trouble, Trump claims he never knew him. Manafort had lived in Trump Tower since 2006 and chaired Trump’s campaign through most of the primaries and into the convention, but Trump described their relationship as being “for a very short time”. Felix Sater, Sergei Milian, Carter Page, Rick Gates and now George Papadopoulos all described as “nothing burgers” as soon as their names were of interest to the FBI or other authorities.

Rick Gates, in addition to working with Manafort, lingered around in a number of positions, visiting the White House numerous times. Six former Trump campaigners helped start the nonprofit group America First Policies to support the president’s agenda shortly after his inauguration. Gates was one of them.