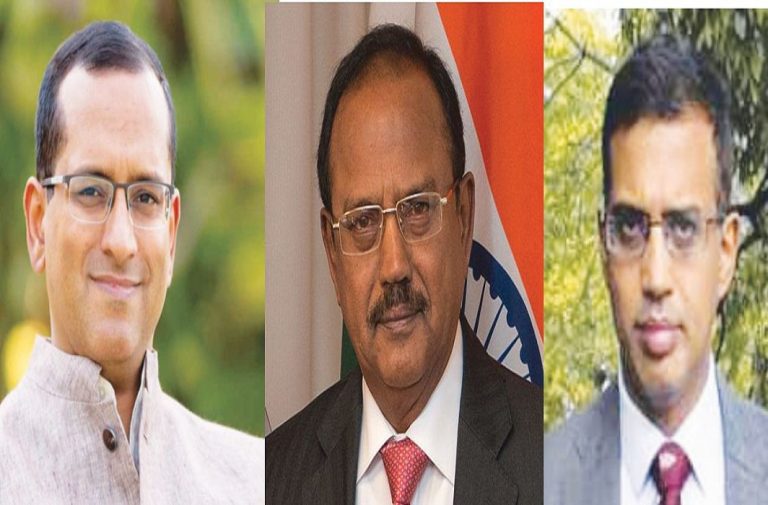 While the government has been crying hoarse about retribution for Pakistan, it has ignored the fact that NSA Ajit Doval’s son, Shaurya, is doing business with Pakistanis

Among the more enduring images of state visits over the last five years is that of Prime Minister Narendra Modi hugging presidents and prime ministers, kings and princes. However, last week when he broke protocol and drove up to Indira Gandhi International Airport to receive Saudi Arabian Crown Prince Mohammed bin Salman, all hell broke loose. The Congress Party, among others, asked whether according a “grand welcome” to the Prince who just two days earlier had pledged a $20-billion investment in Pakistan and praised its “anti-terror” efforts was Modi’s way of remembering the Pulwama attack martyrs. Crown Prince Salman was in Pakistan just a day after 40 CRPF personnel were killed in Pulwama on February 14 by a suicide bomber of the Jaish-e-Mohammed, a Pakistan-based terrorist group.

Congress leader Randeep Surjewala said on Twitter: “National interests v/s Modiji’s ‘hugplomacy’ breaking protocol, grand welcome to those who pledged USD 20 billion to Pakistan and praised Pakistan’s ‘anti-terror’ efforts. Is it ur way of remembering martyrs of Pulwama?” He also tagged photographs of Modi in a bear hug with the Prince as he alighted from his aircraft. This tweet takes one back to a year ago when Surjewala had lashed out at the government over its commitment to fighting terrorism and corruption. Specifically, he sought a response to allegations that National Security Adviser (NSA) Ajit Doval’s son had a business partner based in Pakistan and another who was a Saudi prince from the ruling House of Saud. “On one hand, Amit Shah claims that crackers will be burst in Pakistan if the BJP loses (in Gujarat assembly elections that were then due) while on the other NSA Ajit Doval”s son Shaurya Doval’s business partner Syed Ali Abbas is a Pakistani. His another business partner is from Saudi Arabia,” Surjewala said in a statement.

Over the last few months, several media outlets, in particular The Wire and Caravan magazine’s web edition have reported extensively on the business dealings of Doval’s two sons. Most of these have not been contradicted and it was only recently that Vivek Doval, the NSA’s younger son, filed a criminal defamation suit against Caravan for running a story titled, “The D Companies”. It alleged that Vivek “runs a hedge fund in the Cayman Islands” which is “an established tax haven” and was “registered merely 13 days after Prime Minister Narendra Modi’s government demonetised all existing Rs 500 and Rs 1,000 currency notes, in 2016”. It claimed that Vivek has a partner, Mohamed Althaf Musliam Veetil, who is also a regional director for Lulu Group International, one of the largest hypermarkets in West Asia. The Caravan reported about the interlinks between Vivek’s firms and those run by his elder brother, Shaurya, and stated that these links indicate a larger financial universe run by them, with companies that are connected to the House of Saud.

Shaurya and his myriad businesses have raised many eyebrows. Gemini Financial Services is a company he runs along with Syed Ali Abbas, a Pakistani partner, and Saudi Prince Mishaal Bin Abdullah Bin Turki Bin Abdullaziz Al Saud. He also runs India Foundation, which has four Union ministers as directors, including defence minister Nirmala Sitharaman. Given the highly influential status of Shaurya Doval in India’s power circles and his father’s powerful grip in the Prime Minister’s Office, his role in the investment company raises questions about lobbying.

The fraternity in this cosy little club is not limited to clinching multi-million dollar deals; it is also about getting someone off the hook. When a Saudi diplomat in Delhi was accused of torturing and raping his two Nepali maids in his Gurgaon flat in 2015, Indian authorities first allowed him to move into the Saudi embassy in Delhi with his family and then to leave the country. His diplomatic immunity did not cover the criminal offence committed on Indian soil, but the Indian government, unlike Turkey in the murder of journalist Jamal Khashoggi, did not make an issue of it. The quiet departure of the diplomat is believed to be part of a bargain struck between India and the Saudis after the intervention of Ajit Doval. Human rights activists and others were livid that the diplomat was allowed to leave. Officially, it was stated that the case was a sensitive one and India had to bend as some three million Indians live and work in Saudi Arabia. The country has also, for nearly two decades, been the largest supplier of oil to India.

The government’s view evoked curiosity considering the stand the BJP, then in the Opposition, took when Indian diplomat Devyani Khobragade was arrested in New York in 2013. India has always taken a strong stand on diplomatic immunity in similar cases as hers. Khobragade was arrested and accused of submitting false documents to secure a work visa for her housekeeper and paying her below legal wages. But what led to a diplomatic row between India and the US was the alleged treatment that she was subjected to from American authorities.

In the case of the Saudi diplomat, there was a strong section that believed that the Indian government could have asked the Saudi embassy to waive diplomatic immunity. That India finally preferred to bend over backwards is said to have been due to the intervention of the NSA, who many say is the second most powerful man in the government.

Two days after the Pulwama attack, the government reacted in many ways—withdrawing Most Favoured Nation status to Pakistan and raising customs duty on goods from there from the existing 10-28 percent to 200 percent with immediate effect. Already, film bodies and sports federations are issuing statements about denying work visas to film and TV artistes from Pakistan and skipping ties with the country. Such retributory acts would have carried more conviction if the Augean stables at home had been cleaned by the PM. Maybe he could start by directing his right-hand man to ask his sons to stop doing business with Pakistanis.