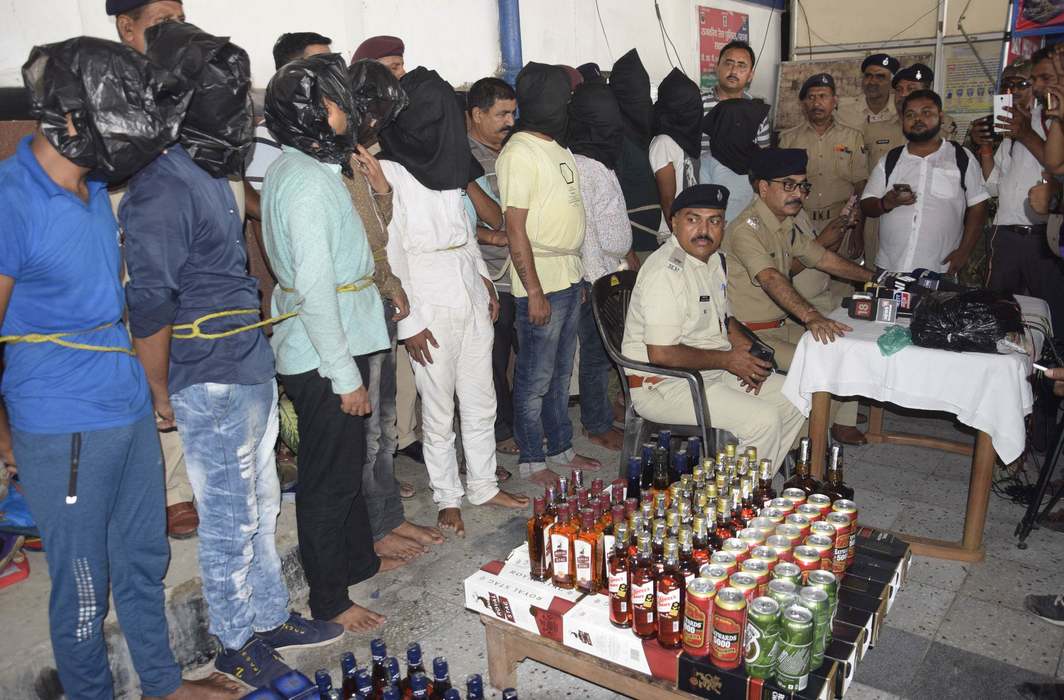 Above: Liquor bottles along with those violating prohibition nabbed by the GRP at Patna station/Photo: UNI

Ever since prohibition was imposed in 2016, courts have been swamped with cases of violations of the Bihar Excise Act and arrests are the order of the day. Has CM Nitish Kumar gone into overdrive?

By Lawkumar Mishra in Patna

It is a social revolution that seems to have gone wrong. Of the 16 lakh cases pending in Bihar courts, three lakh are related to violation of the Bihar Excise Act, 2015. Over two lakh people have been arrested on charges of violation of prohibition laws. And yet, Bihar Chief Minister Nitish Kumar, who reviewed the pendency of prohibition cases in courts recently, has asked his officers to continue raids and drives against those consuming liquor.

Following in Bihar’s steps is Andhra Pradesh, which on November 22 cancelled the licences of all existing bars in the state. Total prohibition was promised by Chief Minister Jagan Mohan Reddy before the assembly elections. All existing bars have been told to close shop by December 31. While new bar licences will be issued from January 1, they will be reduced by nearly 50 percent. Of the 798 existing bars which had licences till 2022, only 401 will get new ones for two years. The rest will be refunded their money.

Meanwhile, Kumar does not seem too bothered about the criticism by the Patna High Court of the large number of cases related to prohibition offences. While addressing a meeting of excise officers, the chief minister directed them to concentrate on nabbing drinkers. He issued directions to the police to take affidavits from the officers-in-charge to ensure a total ban on liquor and strict enforcement of prohibition. The director general of police has been asked to rope in elected representatives of the panchayati raj system in anti-liquor campaigns and identify consumers and traders in their respective areas.

Senior police officers were asked to devote at least 30 minutes of their official routine to monitoring and enforcement of prohibition. The antecedents of liquor traders are being investigated to see what their business was earlier. Liquor trade has now become a flourishing business with truckloads of it coming from far-off places like Haryana. The state government in its affidavit in the High Court admitted that 58 lakh litres of Indian-made Foreign Liquor had been seized.

Every police station in the state is involved in the seizure of liquor and arrest of consumers from hotels, restaurants and residences. Though there has been a spurt in heinous crimes all over the state with murder and looting of banks and finance companies, the police is engaged mainly in tracing liquor traders and consumers. This is despite Bihar witnessing two cases of gold worth Rs 55 crore being looted from a bank at Hajipur.

Policemen are also getting more credit for catching liquor consumers. And, in a frightening situation, the police is taking advantage of Section 48 of the Bihar Excise Act’s “Presumption” clause and arresting people presumed to be guilty. The Buxar police arrested four persons—Manoj Kumar Singh, Vinay Kumar and two of his associates—for their Facebook posts where they were shown consuming liquor and boasting about it.

After spending months in Buxar jail, the four approached Patna High Court for bail. They claimed that they had neither consumed liquor nor displayed any bottles. The police did not conduct any breath analyser test on them nor did they seize any bottles. An inspector in Buxar’s Muffasil police station claimed that he had arrested them after someone sent a clip of the Facebook posts.

Justice Ashwani Kumar Singh of the Patna High Court ordered their release and issued a directive to the state government to make the inspector, officer-in-charge and investigating officer accused in the case for harassing the appellants without sufficient evidence and investigation.

In another case, Justice Anil Kumar Upadhyay of the High Court said in his order: “The figure of pendency of cases indicates that it has reached an alarming proportion and in the absence of adequate courts, judicial officers and support staff, the case management is impossible.”

The Court also quoted an affidavit filed by the principal secretary (home) and said 1.70 lakh people have been arrested. Prohibition cases have also increased the burden of courts manifold. The home secretary was asked to assist Patna High Court on “how the state government wishes to tackle with the problem of increased litigation”.

Chief Justice Sanjay Karol reportedly said: “There are 40,000 bail petitions of the accused arrested under Bihar Excise Act pending before High Court.” The Court expressed surprise at the absence of infrastructure to deal with prohibition cases. Justice Karol ordered that more space be created and more special courts and judicial officers be appointed to deal exclusively with prohibition cases. “Innocent people are being caught since the imposition of prohibition,” he said.

Advocate General Lalit Kishore informed the Court that the state government had sent a proposal for the creation of 74 special courts for prohibition offences on September 9. The Court agreed to sanction the new courts within 48 hours. The government has now proposed that retired judicial officers be appointed to these courts and fabricated structures be set up as court buildings.

According to the affidavit of the state government, only 2,629 cases have been disposed of. This year, 34,526 fresh cases of prohibition violations were filed in different courts in 37 districts of the state. In Pat­na excise court, 22,661 cases were filed this year and only 11 disposed of. Patna’s Beur Central Jail is crowded with prohibition offenders, many of whom were visiting Bihar for the first time, including a Chinese engineer.

In a hotel at Gandhi Maidan, members of a marriage party from Surat were booked for drinking in their rooms and sent to jail. A minimum stay of 15 days in jail is common for prohibition offenders.

Under the Bihar Excise Act, district magistrates have been given powers to impose a collective fine on an entire “village or town” or any particular group or community living there on receipt of a complaint that they are habitually prone to commit an offence under the Act. The Act gives wide powers to any excise officer to enter and inspect at any time any place where a licensed manufacturer manufactures liquor or stores it. The Act allows arrest without warrants. The excise officer is empowered to seal and seize the entire premises where liquor was consumed. The penalty in some cases is more severe than for murder. The minimum punishment is eight years and it can run into a life sentence if the liquor manufacturing leads to grievous hurt to consumers.

The Act empowers a police officer to intercept any vehicle, including the prestigious Rajdhani Express, in search of liquor. Not only will the passenger carrying the liquor be arrested, the coach attendants and travelling ticket examiners too. This has happened over a dozen times. On the Ranchi-Patna road, dozens of buses have been seized and passengers arrested for carrying liquor from neighbouring Jharkhand.

Chhaya Mishra, a central government counsel at Patna High Court, said a bench headed by the chief justice of Patna High Court is examining the validity of the Act. Some liquor manufacturers and doctors too have filed petitions challenging the legality of the Act which they claim violated their fundamental right. The provisions of the Act are tougher than those of similar acts in Gujarat or Kerala, she said. Though the Bill was debated in the state legislature, enough study may not have been done about ways and means to enforce the provisions, Mishra said. She recalled that the preamble of the Act itself was done in a great hurry as it reads: “The state government hereby imposes ban on wholesale or retail trade and consumption of foreign liquor by a licence holder or any person in the whole of the State of Bihar with immediate effect on April 5, 2016.”

Ever since prohibition laws were enforced in 2016, over 500 officers and jawans of the Bihar police and excise have been dismissed on charges of violating these laws, conniving with liquor traders and having assets disproportionate to their known sources of income. Over 100 were jailed too. A few weeks ago, the SP of Kaimur arrested the en­tire staff of a Bihar-UP checkpost for facilitating liquor import from Banaras; 12 officers and men were sent to jail.

Those spending a few months in jail for violation of prohibition include two legislators—one from the JD (U) and the other from the RJD. Following their conviction, their membership was terminated by the chair. In Supaul district, three senior judicial officers of the rank of district judge were terminated last month following investigations by the High Court and confirmation by the Supreme Court that they had crossed over to Nepal to drink.

This was one drink too many.