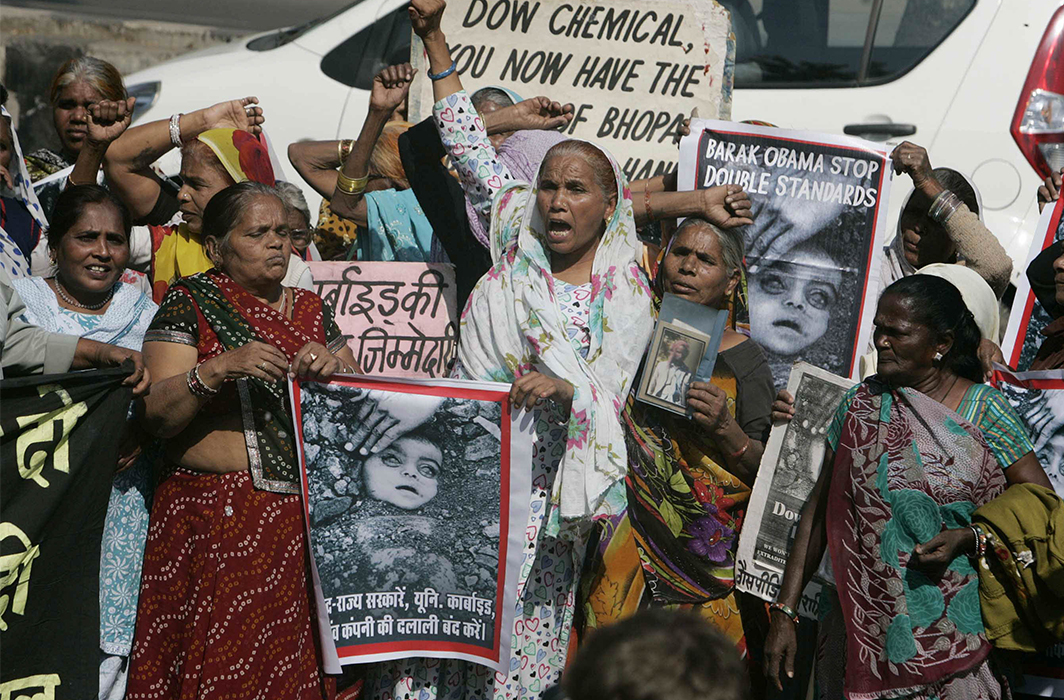 Former Union Carbide chairman Warren Anderson escaped the clutches of the law for the Bhopal gas tragedy. But the then collector and SP are in legal trouble for letting him go

It will always remain a mystery as to who facilitated the breezy escape of then Union Carbide Corporation Limited (UCCL) chairman Warren Anderson, the main accused in the Bhopal gas tragedy, out of India 32 years ago. However, it was never a mystery as to who executed the order. On December 7, 1984, it was then Bhopal collector Moti Singh and Superintendent of Police Swaraj Puri who had escorted him in their official cars to Bhopal airport. Anderson flew in a Madhya Pradesh government plane to Delhi and subsequently, flew off to the US the same evening. Now the officers, long retired, are in legal trouble.

A lower court in Bhopal has summoned them on January 13, 2017, to explain why they should not be prosecuted for helping Anderson escape. The UCCL chairman never returned to India and all attempts by the CBI to extradite him to face Indian courts for the world’s worst industrial disaster proved futile. The disaster, caused by the sudden release of 40 tons of toxic methyl isocyanate gas from the defunct Union Carbide factory on December 3, 1984, killed over 3,000 and maimed over five lakh.

Anderson, who landed in Bhopal four days after the gas leak, was arrested and kept in a guest house. After a few hours in captivity, he was mysteriously released on “an order from someone higher up”. The next day he flew back to the US and managed to secure bail from the police. It was alleged that he had access to a landline phone where he was detained and used his contacts. He remained a proclaimed absconder till his death at a nursing home in Vero Beach, Florida, on September 29, 2014, at the age of 91. His ghost has now returned to haunt those who helped him escape.

It was on November 19 this year that Bhopal’s chief judicial magistrate (CJM) Bhubhaskar Yadav passed an order that Moti Singh and Swaraj Puri should be booked under Sections 212 (harboring an offender), 217 (public servant disobeying direction of law with intent to save a person from punishment) and 221 (intentional omission to apprehend on the part of the public servant bound to apprehend) of the IPC. The CJM had summoned them on December 8. However, as the judge was indisposed, the next date for summons has been fixed on January 13.

“Prima facie it is evident that thousands of people were dying in Bhopal due to leakage of poisonous gases and the heads of the district, the collector and the SP, were using all their expertise and system to help a criminal escape rather than helping the victims,” the judge said on November 19. He said the officers helped the main accused escape without the approval of the court and despite his being booked under a non-bailable section (304—culpable homicide not amounting to murder). 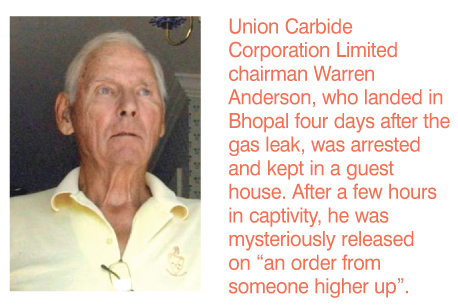 The order came on a petition filed by Abdul Jabbar, an activist of the Bhopal Gas Peedit Mahila Udyog Sanghthan, in 2010. He did so in the wake of a national uproar then over the light sentence given to the accused by the Bhopal CJM’s court. Seven accused were sentenced to two years in prison and fined Rs 1,00,000 each. The accused were prosecuted under Sections 304-A, 336, 337 and 338 (all related to deaths caused by negligence). Victims’ groups and activists who had sought more serious charges criticized the verdict and said death by negligence is most frequently used when it involves car accidents and carries a maximum two-year sentence.

The CBI, the Madhya Pradesh government and the NGOs working for the survivors had filed criminal revision petitions against the judgment before the Sessions Court, Bhopal, which rejected the pleas on August 28, 2012. Interestingly, the ex-officers’ own statements in the media and various panels that probed Anderson’s escape were cited by the judge as evidence against them.

In his book, Bhopal Gas Trasadi ka Sach (The Truth of Bhopal Gas Tragedy, 2009), Moti Singh wrote: “Anderson did not appear satisfied and kept on saying that he wanted to look at the scenario here (Bhopal) and to meet with the chief minister.” He added: “Despite being told that there was huge resentment among people and it was not possible for him to visit anywhere, he (Anderson) kept on evading the proposal to leave for Delhi. He agreed to leave Bhopal only after a discussion of 1.5-2 hours and only then signed the bail document.”

Moti Singh also wrote that Anderson managed to get away by using a phone in the room where he was detained. “Had we removed the landline phone from his room, Anderson would not have escaped. He possibly made calls to contacts in the US to help him leave India.”  The US embassy reportedly mounted pressure on the Indian government, which released Anderson on a personal bond of Rs 25,000.

Meanwhile, Swaraj Puri told the Union Carbide Toxic Gas Leakage Enquiry Commission (also known as the Justice KL Kochar Commission): “We arrested him on the basis of a written order but released him on an oral order”, which he said came “from higher-ups”. Puri was sacked in September 2006 when a case was filed against him for using an NRI quota for his son’s admission to a college in Indore. After retirement, he was appointed as a member of Complaint Regulatory body of the Narmada Valley Development Tribunal, but was removed from there also after the Bhopal court order in 2010.

The Shivraj Singh government is in a dilemma over the court order on registration of FIRs against Moti Singh and Puri. After all, it was the Justice Kochar Commission, instituted by the state government, which had given a clean chit to the officers. Though the report was submitted to the state government in February last year, it is yet to be tabled in the assembly. Sources said that as per the Commission’s report Moti and Swaraj followed instructions of their seniors.

The report states that then prime minister Rajiv Gandhi and then home minister Narasimha Rao had verbally ordered the Union cabinet secretary to ensure the release of Anderson. The cabinet secretary passed on the orders to Madhya Pradesh chief secretary Brahma Swaroop and, subsequently, the Hanumanganj police station was ordered to allow Anderson to walk free. Several reports have suggested that Gandhi was pressured by the US to let Anderson go.

Senior Congress leader Arjun Singh, who was then chief minister of MP, wrote in his autobiography A Grain of Sand in the Hour-glass of Time that home secretary RD Pradhan had called him “on the instructions of then Union home minister PV Narasimha Rao”. Pradhan denied the allegation, saying he was chief secretary of Maharashtra at the time and became Union home secretary only in January 1985.

The truth, perhaps, will never be known.

Lead Picture: Victims of the Bhopal gas tragedy take part in a protest during the 30th anniversary of the tragedy. Photo: UNI

The Lucknow Bench of the Allahabad High Court has ordered promotion of qualified Class IV employees to the post of workshop head in the UP Radio Police Department.
Read more
India Legal
Did you find apk for android? You can find new Free Android Games and apps.