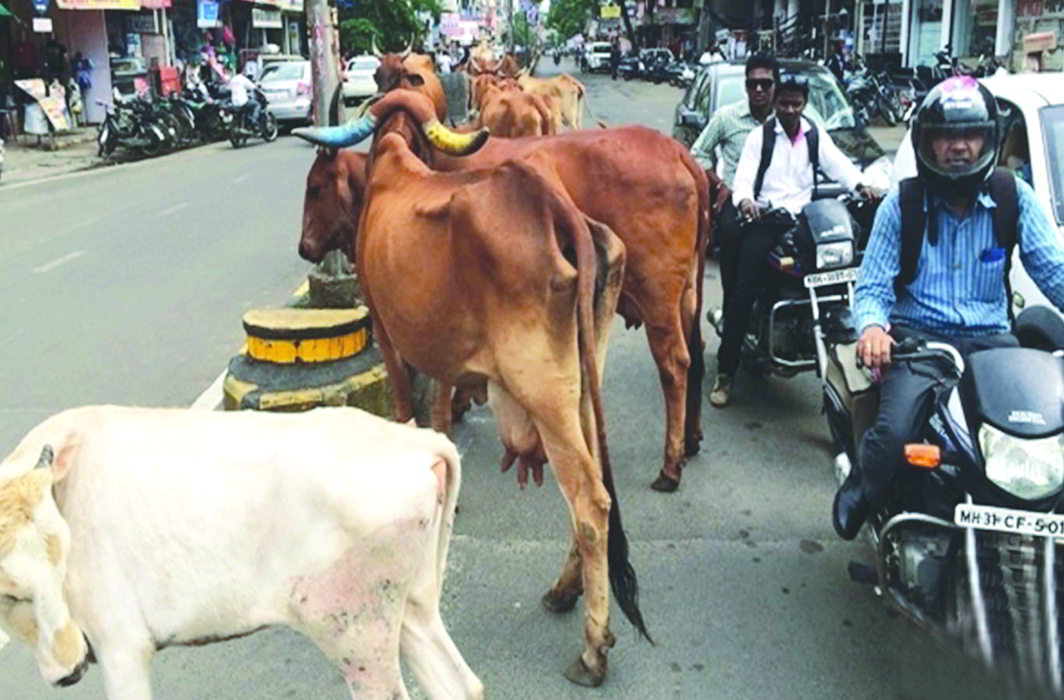 With the stray cow menace assuming alarming proportions and affecting the rural economy, the Madhya Pradesh government plans to amend the law so that owners who abandon their cattle are punished

The Madhya Pradesh government seems to have realised that its victory in stalling cow slaughter in the state is a pyrrhic one. Bovine population here is multiplying, thanks to a stringent anti-cow slaughter law and rampant cow vigilantism by saffron outfits. The unchecked bovine expansion has affected the rural economy and hindered traffic on highways. The stray cow menace has assumed alarming proportions as the animals raid crops, forcing the state government to think about applying punitive measures to owners who abandon their cattle.

To this end, a state government committee has recommended amendment to the Madhya Pradesh Gauvansh Vadh Pratishedh Adhiniyam. The act has provisions to punish those involved in the slaughter and illegal transportation of cattle. It was enacted in 2004 and amended in 2012 with a provision to raise the maximum punishment for cow slaughter from three years’ imprisonment to seven, besides a minimum fine of Rs 5,000. The amended act puts the responsibility of proving the prosecution wrong on the accused in a cow slaughter case. The act further says: “Any police officer not below the rank of head constable or anyone authorised by a competent authority shall have the power of entry, inspection, search and seizure and to present the case in the court.”

As harsh as it may sound, the law has deterred potential offenders. However, it is silent on those who let loose their cows after the animals become unproductive. As a result, cows, instead of being assets, have become liabilities and farmers are unwilling to spend money on rearing unproductive animals.

Farmers who used to sell their cows after they stopped producing milk are no longer able to do so. Selling cows for slaughter is illegal and traders are afraid to buy them. 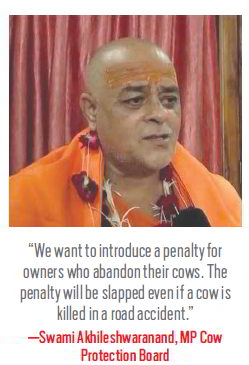 With no avenue to sell their cattle, farmers prefer to abandon them rather than spend on feeding them. This has led to many abandoned cows wandering into farms, destroying crops and prompting a new man-animal conflict. The state’s “kanji” houses, where impounded cattle are kept till they are reclaimed by their owners, are unable to cope with the number of unwanted animals.

Experts have said the large-scale abandoning of cows is a threat not only to the dairy economy but to forestry, grasslands and urban facilities. In order to minimise this conflict and conserve the cow, a committee was set up by the MP government to suggest solutions.

Swami Akhileshwaranand, chairman of the executive council of the Madhya Pradesh Cow Protection Board, reportedly said: “We want to introduce a penalty for owners who abandon their cows. The penalty will be slapped even if a cow is killed in a road accident because it’s proof that the owner has abandoned it.” He is one of the members of a committee which is also looking at how to get stray cows off highways and city streets. Others include bureaucrats from the departments of animal husbandry, cooperation, urban development and environment. The committee also wants the law to include the word “conservation”.

Akhileshwaranand said district collectors had been using drones to spot the areas most affected by stray cows. Only 604 of the 1,246 registered gaushalas in the state are active. The committee has recommended that the owners of gaushalas “who lie about the number of cows they shelter” also be penalised.

Among the other recommendations of the committee are castration of bulls of nondescript breeds, creation of gothan (structures where cows can rest), gau abhyaranya (cow sanctuaries) and gau vanvyavihar (forest areas demarcated for cows) and freeing charnoi (pastures) from encroachment.

The centre has suggested that this project be expanded nationally. Union Minister of State for Home Affairs Hansraj Ahir has proposed that 1,000 hectares of forest land be allotted for cow sanctuaries in every district of every state where slaughter is banned. Madhya Pradesh has the country’s first cow sanctuary. It was recently inaugurated in Salaria village in Agar district of the state. The state government has promised another sanctuary in Rewa district.

Even as the MP government makes owners of cattle accountable for them, the Lucknow Bench of the Allahabad High Court has put the onus on municipal corporations. In Imtiyaz versus State Of UP, the Bench held that: “So far as cows and cattle roaming on roads are concerned, it is the duty of Nagar Nigam and Police to remove them and to ensure that no cows or animals come on road creating obstruction to traffic and threat to life. Secretary, Nagar Vikas, State of UP is directed to issue necessary instructions in this regard to Nagar Ayukts/Executive Officers of local bodies.”

Further, determining liability in such cases, the Court observed that the cattle owners cannot be allowed to leave the animals on roads, forcing them to survive on water from drains/sewers and garbage, which is definitely cruelty.

As such, owners of such abandoned animals should be prosecuted under the provisions of the Prevention of Cruelty to Animals Act,1960, Police Act and Sections 289, 428, 429 of the IPC.

This is a move to deter cattle owners from leaving their animals free on the roads, endangering their and people’s lives.

The problem of abandoned cows in the state cropped up on July 21 in the assembly when MLAs sought intervention on the matter. The lawmakers, cutting across political lines, said cows were being abandoned for good unlike the earlier practice when owners would let loose their cattle post-harvest and later get them back. Bharatiya Kisan Sangh leader Shivkant Dixit said that 35 to 40 of Madhya Pradesh’s 51 districts were affected by the stray cow menace.

Tribal activist Anurag Modi told India Legal that the anti-cow slaughter act, coupled with cow vigilantism, had destroyed the rural economy. “Tribals used to buy young animals from weekly markets and sell them. They have stopped doing so due to the fear of gau rakshaks and the police, who are hand-in-glove with them.”

BJP MLA from Tikamgarh KK Shrivastava, who initiated a debate on the issue in the assembly, blamed the previous Congress government. “Earlier, 10 percent of the total land used to be reserved as gauchar land. By the time the Congress lost power in 2003, the grazing land had come down to just two per cent,” he said.

The Madhya Pradesh Cow Protection Board finds itself unequal to the task of handling the cow problem. Akhileshwaranand says the Board needs more funds. Its budget was increased from Rs 20 crore per year to Rs 25 crore recently. But the Board wants nearly Rs 100 crore so that it can spend Rs 10 per cow per day from the present Rs 2.90.

The Board has also suggested that the government build a gauthan for every four to five gram panchayats each and bring work related to gaushalas under the ambit of the MNREGS. It is obvious that the cattle are in a league of their own here.

The MP government has started to work on a project to tag Aadhaar-like Unique Identification (UID) numbers on the state’s cattle. Dairy animals are to be tagged with a 12-digit UID number under the centre-sponsored National Mission on Bovine Productivity. “Work is underway across the state on a pilot basis,” Dr HBS Bhadoria, managing director of the Madhya Pradesh Rajya Pashudhan Evam Kukkut Vikas Nigam (MP State Livestock and Poultry Development Corporation), said. “After obtaining information about the animal in a prescribed form, it will be uploaded. The target is to put UID tags on 7.5 lakh cattle per month.”

Through the UID number, information about the animal such as its date of birth, location, milk yield, reproductive details and health data would be accessible online. The Gujarat-based National Dairy Development Board is the nodal agency for the project. A yellow tag bearing the UID number will be tied to the animal’s ear. Some 3,600 employees of the Animal Husbandry Department will be assigned this job.