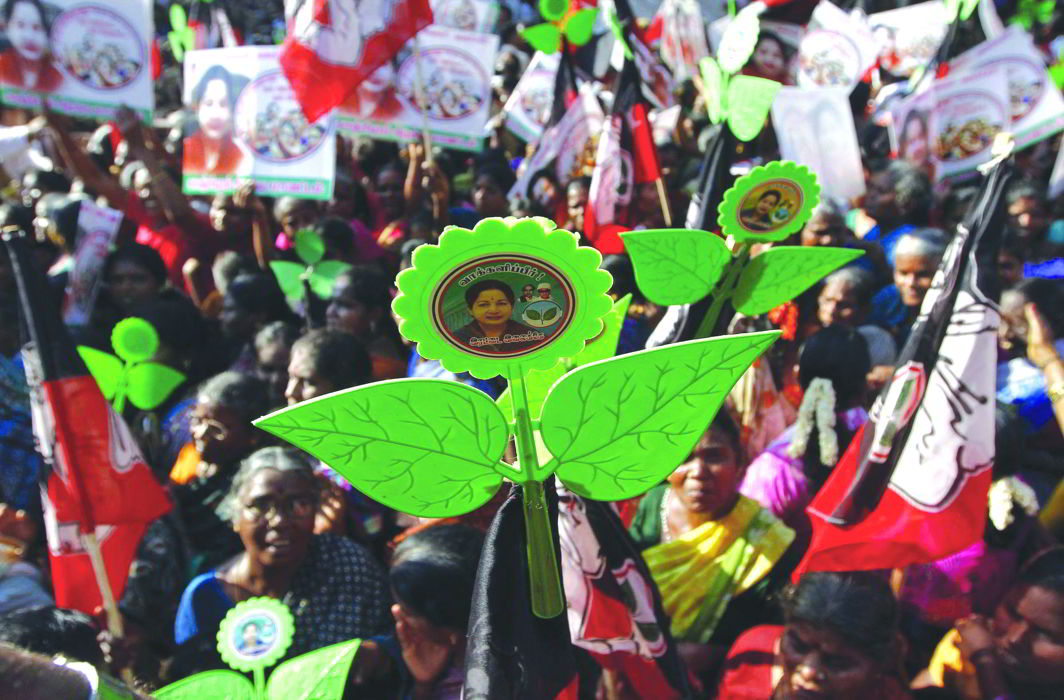 There is much ado about two leaves in Tamil Nadu. Naturally, considering it is the ruling AIADMK’s poll symbol and there is a tussle between two factions of the party over it. The battle finally reached the Supreme Court, which recently told the Election Commission to decide the claims of the factions by November 10.

A bench headed by Chief Justice Dipak Misra disposed of a petition filed by TTV Dinakaran, the deputy general secretary of a faction of the AIADMK. He had challenged a Madras High Court order asking the EC to decide the election symbol row by October 31. He wanted more time to put forth his case before the EC.

It is obvious that the AIADMK is in a deep crisis today and the fight over the poll symbol is just the beginning of it. But then, this is not the first time that the “Two Leaves” symbol has ben frozen by the EC. In 1988, immediately after AIADMK founder and then chief minister MG Ramachandran died, the AIADMK split into two factions. One was led by MGR’s wife VN Janaki Ammal and the other by J Jayalalithaa. During the 1989 assembly elections, the EC had frozen the “Two Leaves” symbol. With the DMK coming back to power, Janaki withdrew her petition from the EC in February 1989 and the poll symbol was given to Jayalalithaa after the factions merged.

But this time, no one knows what decision the EC will take. If the “Two Leaves” symbol is permanently frozen, it will give a psychological boost to the main opposition DMK.

“In a state where people, especially those from the lower strata of society vote on the basis of symbols, a permanent freezing will give some kind of advan­tage to the DMK,” said a senior AIADMK minister who did not wish to be identified.

The DMK too shares the same view. Appavoo, a senior leader of the DMK, said: “If the EC permanently freezes the ‘Two Leaves’ symbol, then the AIADMK will be cut into several pieces. The AIADMK has got 35 to 40 percent of votes and a permanent freeze of the symbol will have a devastating effect on its vote bank. You can conclude who will benefit from that development.”

Former CEC SY Quraishi had said during a seminar in Chennai in 2011: “We have crushed the non state armed groups challenging the election process in India. Not a single election can be challenged or stopped by the armed groups anywhere in India today, whether it is an assembly election or Parliament election. But this ‘cash for vote’ issue in Tamil Nadu is a very challenging one. The political parties are adopting every new method to bribe the voters ….so this is a very serious issue for the EC.” 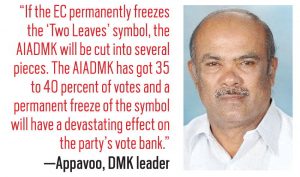 The tug-of-war between the two AIADMK factions began two months after the death of chief minister Jayalalithaa on December 5, 2016. Immediately after her death, O Panneerselvam (OPS), the then finance minister, took over as CM along with 32 ministers. Everything went smoothly till February 5, 2017, when the AIADMK legislature party with 134 MLAs elected VK Sasikala, a close associate of Jayalalithaa, as its new legislature party leader. Immediately, OPS resigned and since then, a political drama has enmeshed the state. And with the Supreme Court on February 14 passing its judgment in the disproportionate assets case against Jayalalithaa, Sasikala and two others, things got worse. Sasikala was sentenced to four years’ imprisonment and sent to Parappana Agrahara prison, Bengaluru.

Before going to prison on February 15, she appointed her nephew Dinakaran as AIADMK’s deputy general secretary. And that’s when the cauldron of resentment boiled over. The EC decided to conduct a bypoll for the RK Nagar constituency in Chennai on April 12, which had fallen vacant on the death of Jayalalithaa. While the OPS camp fielded former AIADMK minister E Madhusudhanan, the Sasikala faction fielded Dinakaran. The chief minister then, Edapaddi Palanisami, remained a Sasikala supporter.

In March, OPS petitioned the EC to allot the AIADMK’s symbol to Madhusudhanan. The next day, on behalf of Sasikala, a petition was filed with Dinakaran as a co-petitioner asking that the “Two Leaves” symbol be allotted to them because they were the real AIADMK.

The EC in its order on March 22 gave the following ruling:  “Commission is not in a position to give any final decision at the present juncture in the short time available mentioned above. Consequently, the Commi­ssion is left with no other option in these compelling circumstances but to make an interim order which may be fair to both the contending groups.”

It said neither of the party factions could use the symbol or the name of the party. It immediately froze the “Two Leaves” symbol.

In another twist on August 21, OPS joined the faction led by the CM, while Dinakaran continued his fight in the EC for more time to submit documents and even went to the Madras High Court. When all else failed, he approached the Supreme Court which told the EC to conclude the matter before November 10.

It remains to be seen if history will repeat itself in Tamil Nadu. Karl Marx had said: “History repeats itself, first as tragedy, second as farce.” Tamil Nadu is a living example of that.