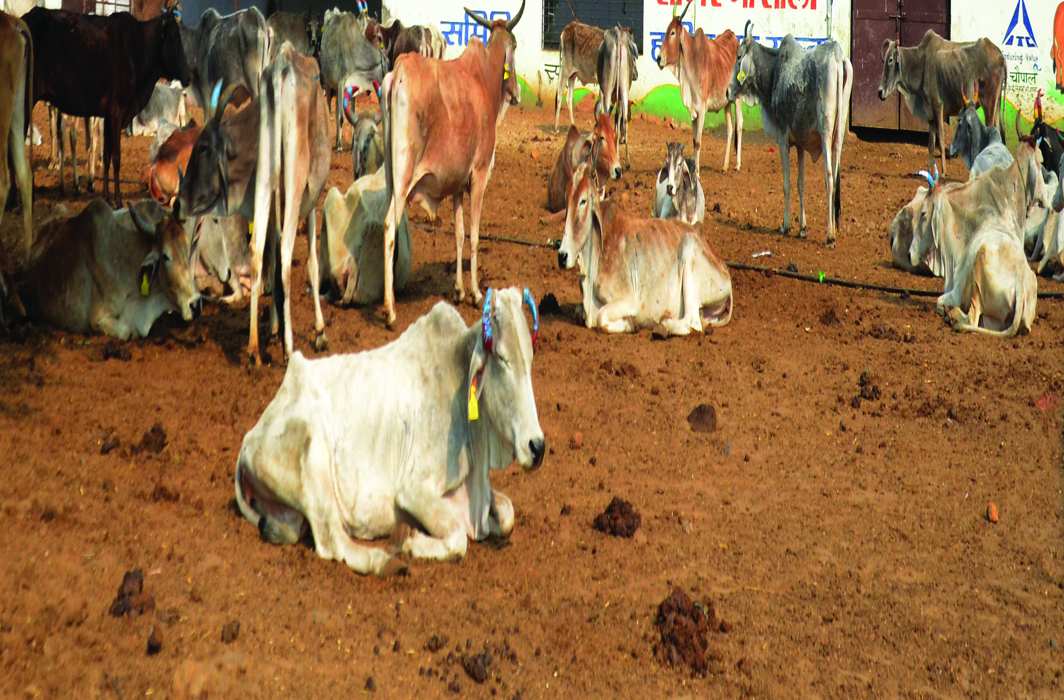 Above: A cow with a UID tag/Photo: Pankaj Tiwari

In an effort to stem the growing number of bovines left to roam the streets after they have been milked, the Madhya Pradesh govt has decided to tag them for quick identification and fine their owners

The Kamal Nath government has recently envisioned a plan to rid Madhya Pradesh roads of the stray cow menace in the next 18 months. The plan sounds rather ambitious given the large number of cattle in the state. According to a 2018 estimate, cows account for 54 lakh out of nearly 90 lakh animals in Madhya Pradesh. The state is second after Uttar Pradesh in cattle population and third in milk production in India.

Identification of stray cows is not a small problem. They fall in two categories: those left for good by their owners after they have stopped giving milk and those let out by owners who milk the cows in the morning and leave them on the streets till evening. For the first category, identification process was set in motion two years ago. They are tagged with yellow tags with a 12-digit unique identification number (UID), which is almost like Aadhaar cards for citizens. Now a plan is afoot to give different colour tags to the second category of cows—those that roam the streets, including those owned by cattle rearers.

Different colour tags will be used for stray cattle impounded during drives by civic and local bodies. The state Animal Husbandry Minister Lakhan Singh Yadav said the new tag would facilitate quick identification of the cattle and recovery of fines from the owners. It was also decided to increase the amount of fines imposed on cattle owners to check the tendency to temporarily abandon the cattle. Till now, the quantum of fines depended on the discretion of the civic authority, though it was normally upwards of Rs 500.

Meanwhile, abandoned cows, said the minister, would be shifted to gaushalas (cowsheds). In July, he had told the state assembly that 1,000 gaushalas would be set up to accommodate the stray cows. Grants for 625 gaushalas being run by NGOs have been increased from Rs 3.32 per cow per day to Rs 20.

The government’s target is to free the roads of stray cattle in the next year and a half to ensure that they don’t cause accidents and damage crops. The move is seen as an outreach by the Congress to the majority community in the state. The government is treading cautiously on this communally sensitive issue so that the religious sentiments of the majority community are not hurt and at the same time, the rural economy gets back on track. 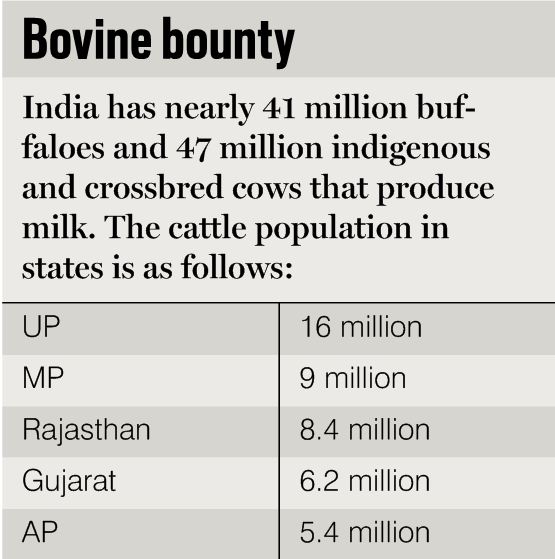 Owing to rampant cow vigilantism during the last 15 years of BJP rule, the practice of abandoning unproductive cows was common in Madhya Pradesh. This did immense harm to the agrarian economy which used to thrive on easy transport of cattle and sale of aged cows for their hides.

In its maiden budget tabled recently, the state government proposed to allocate Rs 132 crore for the welfare of bovines. Incidentally, in its manifesto for the assembly elections held last year, the Congress had promised commercial production of gaumutra (cow urine) and kanda (cow dung cakes) and to set up cowsheds in all 23,000 village panchayats in the state. Fulfilling the cowshed promise will entail nearly Rs 27,000 crore. Compared to this, the Rs 132 crore in the budgetary provision for bovine welfare is just chicken feed. Therefore, the government is seeking to find more practical ways to deal with the stray cow problem. Instead of increasing the number of cowsheds, it is focussing on measures to penalise owners for abandoning their cattle, even if it is for a short while. Identification of cows and their owners is an important step in this direction.

Work on identification of cattle started two years ago during the BJP government. In August 2017, Madhya Pradesh was chosen for a pilot project for providing Aadhaar-linked UIDs to over 90 lakh cattle. The centre-sponsored National Mission on Bovine Productivity launched the project.

MP State Livestock and Poultry Development Corporation Managing Director Dr HBS Bhadoria had said that after obtaining information about the animal in a prescribed form, it would be uploaded. Although the initial target was to put UID tags on 7.5 lakh cattle per month, a sizeable number is yet to be given these tags. A yellow tag bearing the UID number is tied to the animal’s ear. Some 3,600 employees of the Animal Husbandry Department are engaged in this task. They have been trained to affix the polyurethane tag inside the ear of the animal with a tag applicator. The tag is tamperproof, cannot be opened with a wrench and is designed to last for years, an official said. The tag weighs just eight gm to cause minimum inconvenience to the animal. Once the tag is fixed, the technician will use a tablet to update the number on an online database and also provide the cattle owner with an “animal health card” recording the UID number, owner’s details, status of periodic deworming and vaccinations as well as breeding details. This will help track the cattle along with all relevant details. Through the UID number, information such as the animal’s date of birth, location, milk yield, reproductive details and health data become accessible online. It also helps to keep a check on illegal slaughter and transportation of animals.

The Gujarat-based National Dairy Development Board (NDDB) is the nodal agency for the project. The NDDB has formed a nationwide database called the Information Network for Animal Productivity and Health (INAPH). Gulabsingh Davar, joint director and INAPH nodal officer, said the tagging has helped in curbing the practice of people leaving their cattle astray and illegal transportation for slaughter. The database of animals with their age, breed, lactation information, height, colour, horn type, tail switch and special marks will also help government agencies that are bringing in new schemes to increase milk production.

The success of the cow UID tag project in Madhya Pradesh is part of PM Narendra Modi’s grand vision to tag and track cattle so that they are vaccinated on time and scientific intervention is made available for better breeding and increasing milk production, doubling income of dairy farmers by 2022.