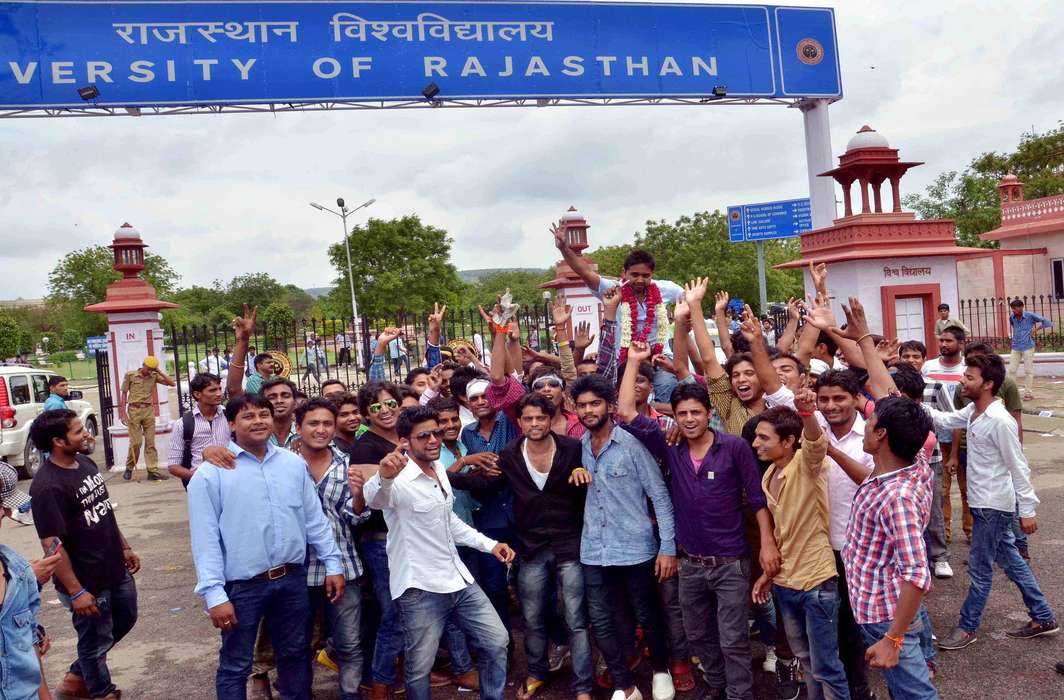 Above: Students of Rajasthan University, whose V-C is facing probe for financial irregularities/Photo: UNI

After the Rajasthan government passed the Universities’ Law (Amendment) Bill, which has a provision to remove V-Cs, it initiated a probe into irregularities by two of them

The Rajasthan government’s decision to order a probe under the newly-enacted Universities’ Law (Amendment) Bill, 2019, into the alleged irregularities and malpractices by two former vice-chancellors (V-Cs) has raised questions about the autonomy of educational institutions. It has sparked fears that universities may become another ground for political battles.

The rationale behind these amendments is that there is no provision for removal of a V-C in the universities’ laws if any unprecedented condition warrants it before the end of the tenure. Therefore, the provision relating to the removal of V-Cs was included. Before this law, V-Cs were appointed by the governor in consultation with the government for a fixed term of three years or 70 years of age, whichever was earlier. There was no provision for their removal from office. The amended law states that a V-C can be removed in consultation with the governor on the basis of the state government’s report or if in the opinion of the chancellor (the governor), the person in that post “abuses his power” or “wilfully omits or refuses to carry out provisions of the Act”. 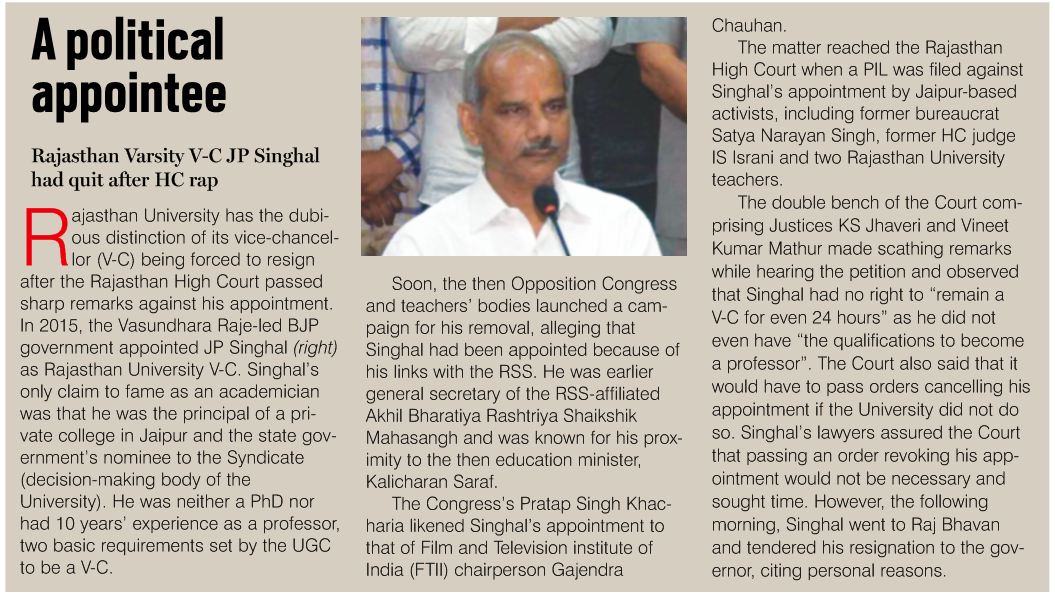 A former V-C, who did not want to be named, told India Legal that this was an unhealthy trend as far as autonomy and academic excellence of educational institutions were concerned. “Educational institutions should not become a game for politics. Yes, a lot of people use their political connections and affiliations to get this coveted post. In some cases, people do not fulfill the basic eligibility criterion set by the University Grants Commission (UGC). The problem is with the system. It should be improved and there should be a proper structure of checks and balances so that such people do not sneak in,” he said.

“If V-Cs are appointed and removed like any other political appointee, then it will spell disaster for the entire higher education system,” he said. “With a change of government, governors or heads of state corporations should go because such appointments were done on the basis of political affiliations. Why should V-Cs be included in this category?” he wanted to know.

“Already, political influence has made V-Cs slaves of their political masters. Although universities are autonomous, that exists only on paper as they had to depend on governments for funds. I have seen V-Cs waiting like subordinates outside the office of the higher education secretary and finance secretary,” he revealed. Besides questioning the need for the bill, he said that the government already wields so much power. “There are times when alleged irregularities on the part of V-Cs are used as blackmailing tactics to force them to quit,” he said.

Prof RC Chaudhary, Emeritus Professor in the Department of Maths, University of Rajasthan, told India Legal that the new law will make the post of V-C a political post like that of the governor. “About 30-40 years ago, V-Cs from any university were appointed by a body of academics with a brilliant record across India and the decision used to be final. Although the UGC was there, the government ensured that people with integrity, and not influenced by anybody, were made chairmen or secretaries. Now, even non-PhDs can be appointed V-Cs,” he said.

Incidentally, the inquiry relates to the alleged irregularities by NP Kaushik, retired V-C of Rajasthan Technical University (RTU), Kota, and the present V-C of Rajasthan University, RK Kothari, who were appointed by the previous BJP regime.

The probe against Kaushik relates to financial irregularities during his tenure. According to the divisional commissioner of Kota, the inquiry is regarding the investment of funds for provident fund. Kaushik, while denying the charges as baseless, said all the investments were done in accordance with the University regulations for provident fund and that he had followed all the prescribed procedures and regulations.

The inquiry against Kothari concerns financial irregularities and misuse of position by not following the prescribed norms in the appointment of professors, deputy registrar and also the lower division clerks.

Calling it “political vendetta”, the BJP accused the Congress government of deliberately initiating inquiries to harass academics appointed during its previous regime and interfering in the autonomy of universities.

Appointing the head of an institution of higher education has become so contentious that the UGC constituted a panel of educationists to review the present system.

Headed by Prof P Balaram, former director, Indian Institute of Science, Bengaluru, the panel in its recommendations found flaws with the existing system of selecting academic heads of institutes of higher learning, and called for a review, implying that politicians should not be part of the process.

“The UGC/ministry of human resource development, as well as state governments, must seriously review the mechanism by which vice-chancellors are appointed. Good academic leadership is essential for improving the research culture, including the quality of PhD/ MPhil degrees,” the panel noted.

It said that the V-Cs of central universities and directors of IITs are now appointed after approval from the Visitor, the president of India.

The HRD minister chairs the selection panel for IIT directors and the minister’s office forwards the recommended names with preferences to the Visitor, who usually approves the preferred person.

In universities funded by state governments, the government concerned sets up search committees, approves the recommendations and sends them to the governor, who is the chancellor of these institutes.

So, whether it is the central institutes or those run by a state, governments have a considerable say in the selections and appointments, the panel said.

Balaram said that the existing system of the HRD minister chairing the panel for selecting IIT directors was bad practice. Generally, people on a selection panel should be different from those who approve, he said, adding that academics of repute should select V-Cs.

He said: “If the selection process for central universities is improved, it may force state universities to follow suit.” The panel recommended that the V-C must be a respected academic as the post is not merely that of an administrator. The V-C must have a vision and spend time on academic matters, it said.

Faizan Mustafa, the V-C of NALSAR University of Law, Hyderabad, told India Legal that each university has its distinctive identity and peculiar problems, so ideally universities should be free to elect V-Cs they think are best suited to lead them at a particular point of time.

He gave the example of Aligarh Muslim University (AMU) which follows the western model under which universities have the freedom to choose their own V-Cs.

AMU had, on numerous occasions, appointed IAS officers like the late Syed Hamid and retired army generals like Zameeruddin Shah as V-Cs because it faced administrative problems.

Giving freedom to universities is the need of the hour.