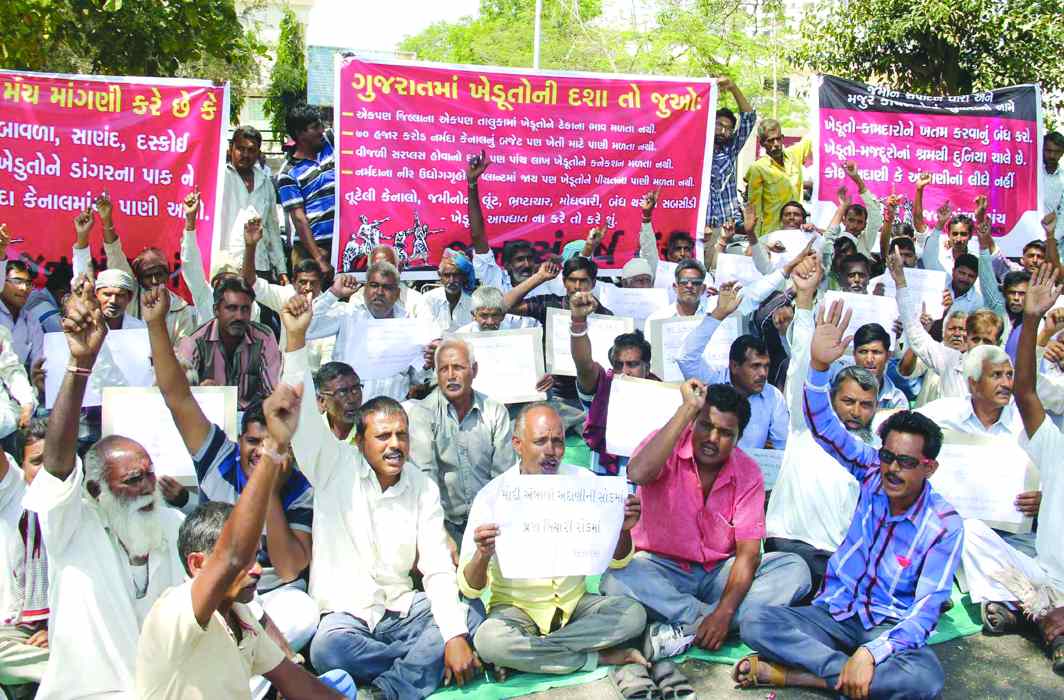 Above: Gujarat has been witnessing major agrarian unrest over crop failure and claims rejection/Photo: UNI

With the Pradhan Mantri Fasal Bima Yojana becoming a profit-making enterprise for private insurance companies, the state government will set up a separate fund to compensate for crop failure

A patriot must always be prepared to defend his country against his own government, goes an old saying. The farmers of Gujarat find themselves in precisely such a predicament. First, they face ruin from the elements and then need to be saved from a government which has set out to save them.

The immediate provocation for such a reaction came from Bharat Zala, director of Citizens Resource & Action Initiative (CRANTI), an NGO, after the Vijay Rupani-led BJP government replaced the existing crop insurance scheme and set up a separate fund to compensate for crop failure. The state government, it is learnt, has got an in-principle nod from the centre for the fund which is likely to have an annual corpus of over Rs 3,000 crore. The centre will make available its 50 percent share of the insurance which was hitherto being given to private insurance funds.

Gujarat has been witnessing major agrarian unrest over crop failure and large-scale rejection of claims by private insurance companies which had turned this rural misery into a windfall for themselves. In 2018, the farmers, the centre and the state government paid Rs 3,031 crore (farmers’ contribution was Rs 365 crore) as premium for crop insurance, while the companies reimbursed only Rs 2,050 crore.

Though the BJP reaped a windfall in the Lok Sabha election, the rising tide of farmer resentment bodes ill for the party. With rains remaining elusive, 206 reservoirs in Gujarat have merely 31 percent water. An element of desperation has begun to set in, with farmers going on protests.

In Dwarka district, they blindfolded themselves and formed a human chain as they sought payment of 25 percent of the crop insurance amount. “The Gujarat government announcement is yet another gimmick to hoodwink the sufferers. Farmers are heading towards a crisis and when the government will be implementing its schemes, nobody knows,” said Karsanbhai Sevaliya, a farmer of Jamkhambhaliya.

Prime Minister Narendra Modi’s ambitious Pradhan Mantri Fasal Bima Yojana (PMFBY), launched in April 2016, was aimed at providing crop insurance to farmers in case of crop destruction due to natural factors. Instead, the scheme has become a profit-making enterprise for private insurance companies with inordinate delays in settling compensation cases and large-scale rejections.

Farmers believe that not even 20 percent of the total claims submitted by them have been approved. The crop insurance premium burden is shared by the state and the centre in a ratio of 49 percent each, while the farmers bear two percent of it.

Zala, an indefatigable crusader for farmer rights, even went to the Supreme Court. In 2013, he moved the apex court through CRANTI over the issue of farmer suicides. At the time, the centre was forced to admit that there were over 12,000 suicides in the agriculture sector every year. Realising the magnitude of the crisis, the Court expanded the scope of his petition, which was confined to Gujarat, to encompass the entire country. It asked the centre to frame a policy to deal with the root cause of the problem. The case was fought by well-known lawyer Colin Gonsalves virtually free for CRANTI. “In fact, the lawyer would even fund my travel to Delhi,” said Zala.

Interestingly, during the 2014 general election, farmer suicides in Gujarat were the subject of a slanging match between then Chief Minister Narendra Modi and AAP leader Arvind Kejriwal. Kejriwal’s stance was that 5,874 farmers had committed suicide in the state in the last 10 years, while Modi said that only one farmer had killed himself due to crop failure. The actual figure given to Zala, in response to an RTI plea, is 692 suicides between 2003 and 2012 when Modi held the reins of the state.

Attorney General KK Venugopal’s plea to the Supreme Court, furnishing details of PMFBY, was that it was the panacea for almost all the ills plaguing the sector and it would provide insurance cover for all stages of the crop cycle, including post-harvest risk. The Court noted that a scheme of such proportions needed time to be implemented and granted the same.

However, the Congress leader in the Gujarat assembly, Paresh Dhanani, went on record last year, alleging that this was a scam. “By making this central scheme mandatory for farmers and bringing in private players instead of the Agriculture Insurance Company (AIC) of India, the NDA government is pulling off a scam of Rs 1 lakh crore, eventually benefitting private insurance companies,” he said.

The AIC, he said, earlier insured crops of farmers who opted for it voluntarily. “But after the NDA came to power in 2014, the AIC was replaced by private insurance companies and farmers were forced to go for the renamed Pradhan Mantri Fasal Bima Yojana.” Dhanani claimed that private players were now being paid a hefty premium of over 50 percent from the state and central treasuries.

Meanwhile, Zala is back before the Supreme Court, seeking an advisory as the government has failed to implement much of what it stated before the apex court. As far as CRANTI is concerned, it is demanding setting up of an agricultural commission in the form of a quasi-judicial body, right up to the district level.

This commission should look into farmers’ problems, including those relating to crop insurance, with powers to arbitrate and conduct a farmers’ census which will bring out their actual condition and economic state. Zala said: “A farmer who slogs day and night is entitled to an income guarantee of Rs 500 per day per adult family member. This is not asking for much as it is the equivalent of what a Class IV employee earns in any state government.”

After all, one expects to reap what one sows.