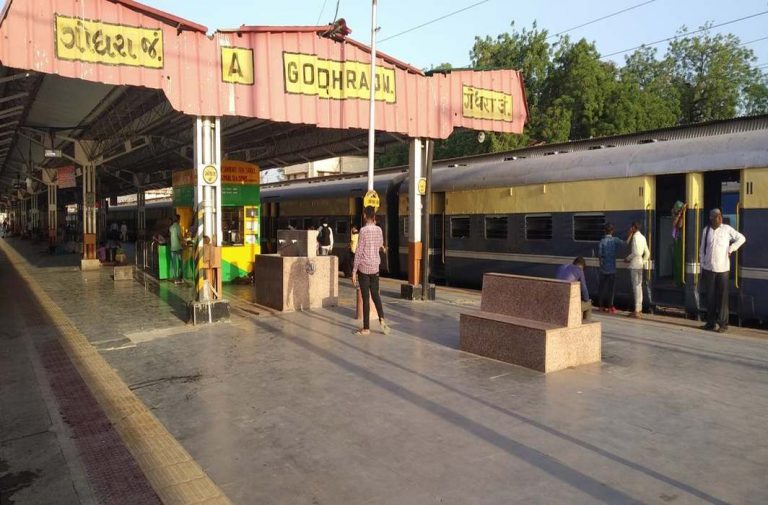 Above: The Godhra train carnage was the basis for the original Bill introduced by the Modi government which was rejected by three presidents earlier

Opposition parties and human rights activists are up in arms over the Gujarat Control of Terrorism and Organised Crime Bill, which they term draconian and open to misuse for political gains

By RK Mishra in Ahmedabad

Does Prime Minister Narendra Modi remote control his home state of Gujarat? Three consecutive presidents, the last one during Modi’s rule at the centre, had rejected the Gujarat Control of Terrorism and Organised Crime (GCTOC) Bill. The fourth president, Ram Nath Kovind, installed by the Modi government, finally gave the nod to the controversial Bill on November 7.

The three earlier presidents—APJ Abdul Kalam, Pratibha Patil and Pranab Mukherjee—had sent the Bill back to the state government. That it was a Modi initiative was evident when Gujarat Minister of State for Home Pradipsinh Jadeja declared: “The dream of Prime Minister Modi has finally been fulfilled today.”

According to Jadeja, the provisions of the Bill will be crucial in dealing with terrorism and organised crime such as contract killing, Ponzi schemes, the narcotics trade and extortion rackets.

One of the key features of the Bill is that intercepted telephonic conversations will now be considered legitimate evidence. Ironically, the very points the minister was gloating over were precisely those that were red-flagged by the three distinguished First Citizens of the country.

The Congress, as well as civil society organisations, have been up in arms against the presidential assent to the legislation. “Such draconian powers in the hands of a government which has scant regard for human rights or individual privacy are bound to be misused. There are enough provisions in the existing laws to deal with the offences cited by the minister. The legislation is draconian and will give the government not only a means to intimidate minority communities, as was seen during the  POTA era, but also a means to suppress all dissenting voices, opposition mass movements, effectively crushing the people’s voice against the government’s anti-people policies,” said a spokesperson of the Gujarat Congress.

Gujarat-based environmental activist Rohit Prajapati added: “It will open the gates to state-sponsored terrorism. POTA, in its short life of over two years, was the legal means to register 287 cases in Gujarat—all against Muslims, barring one case.”

He also cited the Terrorist and Disruptive Activities (Prevention) Act (TADA) as an example of misuse against minorities. TADA was an anti-terrorism law which was in force between 1985 and 1995 in the backdrop of the Punjab insurgency and was applicable nationwide. The Act, which came under fire from political parties as well as human rights organisations due to mounting allegations of abuse against minorities, was allowed to lapse in May 1995 during the tenure of the PV Narasimha Rao government.

The Prevention of Terrorism Act (POTA), 2002, was passed by Parliament with the objective of strengthening anti-terrorism operations, in response to the attack on the Kashmir Assembly in Srinagar and Parliament in 2001. It was repealed by the Manmohan Singh government in 2004.

A year after Narendra Modi took charge as chief minister of Gujarat in 2001, the Godhra train carnage in which 59 people perished, triggered statewide communal riots. Over a 1,000 people, mainly Muslims, died in the communal riots that followed. The GCTOC Bill first came up post-2002 because the weapon of choice, POTA, enacted by the NDA government of Atal Bihari Vajpayee, was repealed by the UPA-led Manmohan Singh government immediately after coming to power in 2004. POTA had replaced TADA. The Bill was drawn up along the lines of the Maharashtra Control of Organised Crime Act. Sent to the president for assent, it was returned by the then president, Dr Abdul Kalam, who wanted certain controversial clauses deleted. Particularly, objections were raised to the clause on interception of communication.

In 2008, the Bill was again passed by the state assembly after removing the clause but retaining that making confessions before police was admissible evidence. In 2008, President Pratibha Patil returned the Bill. In 2009, Modi again passed the Bill, ignoring the suggestions made by the president, and sent it back. Though Modi relinquished charge as chief minister of Gujarat on May 22, 2014, to take over as prime minister, Gujarat continues to remain his closely guarded fiefdom.

This explains why the twice-rejected Bill was again tabled on the last day of the budget session in the Gujarat Assembly on March 31, 2015, in a new form called the Control of Terrorism and Organised Crime Bill, 2015, and passed, overriding the protests of the opposition Congress.

The then minister of state for home, Rajnikant Patel, strongly built a case for GCTOC on the grounds that Gujarat shares a border with Pakistan which sponsors terrorism and such legislation is required for the safety and security of the people of the state. “Criminal coteries are known to make common cause with terrorist elements and the two together pose a threat which needs to be curbed forthwith and therefore the need to arm the state with a stringent law like the one brought forward by the state government,” he had said on the floor of the House.

The Anandiben Patel government had taken the stand that “Maharashtra has its Maharashtra Control of Organised Crime Act (MCOCA), as do Karnataka and Andhra Pradesh, but the BJP-ruled states like Gujarat, Madhya Pradesh and Rajasthan were being denied Presidential Assent” for implementing such a bill.

The Congress as well as NGOs had opposed the legislation. The Gujarat Jan Andolan (GJA), an umbrella grouping of NGOs and several human rights groups, petitioned the president to reject the Bill once again and warned of a statewide agitation.

Rajesh Mankad of the Jan Sangharsh Manch termed the Bill a “black law” while DN Rath of the Movement for Secular Democracy (MSD) said that farmers agitating against land acquisition may well become the first victims of this atrocious Bill, if it becomes law. They pointed to the tainted record of the Gujarat police with its string of fake encounters and that existing laws have the capacity to deal with all manner of crime and criminals provided they are used properly.

The opposition Congress in the state and at the centre as well as the JD(U) and the CPI(M) went on record, urging President Pranab Mukherjee not to give his assent to the Gujarat anti-terror law.

The 2015 Bill passed by the assembly had armed the police with unbridled powers to tap personal phones without permission and detain people without hindrance.

The Bill, which has a provision for the death penalty and a fine of Rs 10 lakh, allows for phone intercepts and their admissibility as evidence in courts. That applies to confessions extracted by the police.

Most important, it upturns the law, putting the onus of proving one’s innocence on the accused. “The Special Courts shall presume, unless the contrary is proved, that the accused has committed such an offence,” the Bill states.

The Statement of Objects and Reasons says: “It was considered necessary to enact a special law with stringent provisions, including the power to intercept wire, electronic or oral communication. Person in custody under this Act cannot be released on bail unless the public prosecutor has been given an opportunity to oppose it, and a special court is satisfied there are reasonable grounds to believe the accused is not guilty and will not commit any offence while on bail.”

Shaktisinh Gohil, AICC spokesperson, and former leader of the Congress said that the bill was first rejected by the president at a time when the BJP was in power at the centre. NCP leader Shankersinh Vaghela said: “It is not for the benefit of the people but for those who are in power.”

The government, however, seeks to defend the clause that provides for 180 days’ time for filing of a charge sheet under the Act as necessary because sensitive cases require enhanced investigation time.

The new law states that any act intended to disrupt law and order, public order or endanger the unity, integrity and security of the state or to spread terror in the minds of sections of people will fall into the category of terrorism.

The law deals with terrorism and organised crime such as contract killing, Ponzi schemes, the narcotics trade, extortion rackets, cybercrime, land-grabbing and human trafficking. According to the ministry, the new law has a provision that allows life imprisonment for cases involving the crimes listed above. Additionally, if a death occurs in these crimes, capital punishment could apply. Besides this, it provides immunity to the state government from legal action.

Clause 25 of the Bill states: “No suit, prosecution or other legal proceedings shall lie against the state government for anything which is in good faith done or intended to be done in pursuance of this Act.”

A retired senior bureaucrat of the Gujarat government had the last word when he said that Clause 16, which makes a confession before a police officer admissible in a court trial, is nothing more than “legitimising of torture at the hands of the police”.